Today I thought I’d show the results of the flour paste resist that I did last week. I used some light blue cotton fabric I had kicking around in the stash and already washed. I just gave it a pressing with a hot iron and cut it into vaguely place mat-sized pieces. The paste recipe is really simple:  1 part regular white wheat flour whisked into an equal part cold water. Add a little more water or a little more flour until you get the consistency of thin pancake batter. I taped the corners of the fabric pieces down to my table with masking tape and used a thin plastic card (thinner than a credit card) to spread the paste over them. This is the messy part so make sure you’ve got the area covered with plastic! Then I used a variety of tools (fork, point, comb, paint scrapers etc.) to make patterns in the wet paste. I was in a hurry to dry the cloth so after a short while I hung them all up on my basement clothesline. They dried overnight but wrinkled up quite a bit so I gave them another press (no steam) to flatten. The crackles that made in the paste are a good thing! 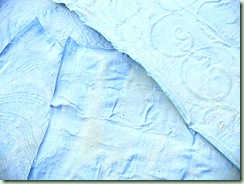 Here’s the results after the paste dried and before I painted them. You might be able to see the scratched patterns in the crunchy paste.

Then at our Spectrum meeting, I mixed up some Setacolor transparent fabric paint in red ochre, indigo, and brown velvet diluted with water and toning with a bit of black lake. I can’t say how much of anything since I didn’t measure! I slapped it around on the pasted 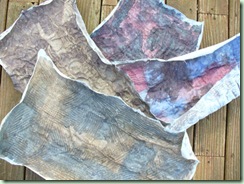 cloth with a sponge brush, not paying too much attention to placement. Some pieces got blue and red ochre and some got more brown and black. Here’s what it looked like after the paint dried. Pretty awful actually! Though you could see the potential patterning on the backs.

After leaving it 24 hours to set, I soaked the fabric in warm water for awhile and then took a soft brush (one of these handy things from Lee Valley Tools) to release the paste from the surface. It was quite tedious to get that stuff off! But it was kind of fun at the same time. Anyway, after I got it off as best I could I threw the pieces in the laundry to wash again with detergent and dried them in the dryer. Now they look like this: 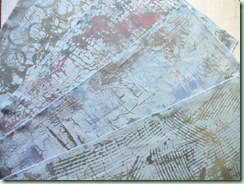 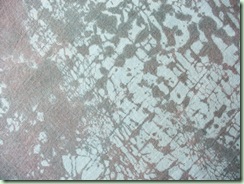 Cool huh? I still have 4 pieces left that are pasted but haven’t been painted yet. I ran out of time at Spectrum and haven’t gotten back to it yet. Maybe later today.

Meanwhile another project is simmering – literally. I pulled half a dozen stalks of rhubarb out of my garden to make sauce and saved the leaves, all 700+ grams worth. This is only one of them: 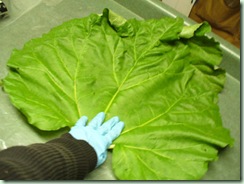 Just a little guy, huh? Could use it for an umbrella! I chopped them up and simmered for an hour and then left them overnight to cool. OK, it was really over two nights! I didn’t touch it yesterday but just left it sit. Today after sieving out all the plant goo, I was left with this lovely soft greenish-yellow bath: 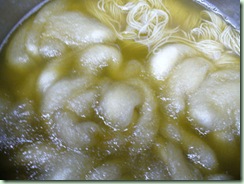 Oh yeah, for those who are concerned about the poisonous aspects of rhubarb leaves read this. Yes, I was careful. See the blue glove? Oh, and don’t miss the great info on that website. Lots of recipes too! The eating kind – not the dyeing kind. Personally I like the stalks simmered with just enough sugar to avoid serious puckering then served warm over vanilla ice-cream. Slurp!

Speaking of blue gloves, I never did find any that fit me properly. I just got accustomed to using ones that are too big! The advantage of the heavy kind of nitrile gloves (not the lightweight ones in the photo) is they wear really well and last a long time without popping holes. I even broke a wine glass in the dishwater accidentally and it didn’t cut through them. Yay! However I do wish they made them somewhat smaller. At least a normal woman’s small size would be nice even if that’s still somewhat too big for me. Sigh.

Which reminds me. I went to the dermatologist again on Monday and didn’t get any more antifungal medication. He doesn’t think I need it. Hope he’s right. Anyway he did give me yet 2 more meds for the psoriasis. Oh my. Now the count is up to 6 different goops to slop on at various times. Yikes. I have to keep track of what goes where and when on my computer’s calendar! Since it started working its way up my shins recently, they have to be slathered on a different schedule from my feet and hands. We’ll see how this works. At least I got his input on the benefits of getting a bit (but not too much) sun on the affected areas. And he told me not to be concerned about working in the garden. The psoriasis skin is no more vulnerable to anything in the soil than normal skin. I just have to be careful to wear my gloves since my palms are sensitive and wash my hands gently with my special soap. And moisturise lots. Right now it’s feeling somewhat better than it has been. Officially a year now since I noticed the original symptoms. Bleh.

That's one HUGE leaf! What colour will the yarn come out?