So much for thinking I was getting better. Now The Bug has turned into full-blown bronchitis but I suppose it’s still not as bad as I’ve had in the past. My voice has gone all squeaky and uncertain too. I haven’t been sick (truly!) for a couple of years. We aren’t counting the Itchies. Which is now up to my waist all around if you’re curious. Tide’s still coming in, huh? Yuck. It’s all rather disappointing. At the same time, thanks to the new meds I’m peeling and feeling like a dried up old stick. I think I need to fill the bathtub with moisturiser and just wallow.

Anyhow, I sucked it up long enough for my friend Bonnie to come over yesterday and we played with the rather rampant woad: 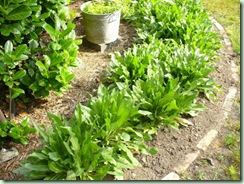 This was taken before we harvested a large bucket full but it doesn’t look much different afterwards. I didn’t have that much that I wanted to dye so I let Bonnie have a good go at it. And of course forgot to take photos. I dyed an old cotton scarf that originally was an extremely pale marbled blue, pink and green. Now it looks like this: 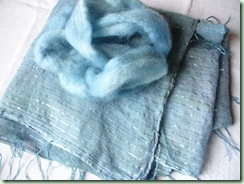 I like it much better! On top of the scarf is the little bit of wool sliver I threw in at the last, though judging by the depth of colour I could have put in a lot more of it to use up the dye. We followed the same recipe that I always use with only 2 changes:  we cut the leaves more coarsely (maybe chopped in thirds) and Bonnie had this great idea to put the 2-litre pop bottles of ice directly into the dye pot with the leaves to cool it down even more quickly. Worked a treat and we got a very good blue vat with lots of colour in it and a lovely violet bloom on the top. I think I’m getting the trick honed to a science now! It also helped that we’ve had some lovely hot sunny days to ripen the woad. I think this is the earliest date I’ve tried to use it and with such excellent results. There’s lots more left to play with too when I’m feeling better. For those who like a full blow-by-blow account:

So if you’re paying attention you will notice that we are doing several steps that seem counterproductive. First acid then alkaline; next add oxygen then take it away again. Do NOT ask me how the ancients figured out how to get blue out of these cabbage-like plants. It’s a fascinating mystery. Though Teresinha has some history here.

Meanwhile I’m waiting for my Chinese woad and weld to grow up enough to test. I tried a couple of 2-litre canning jars of solar dyes. I layered some of the Merino-X fleece with marigold and coreopsis flowers, oregano (no idea whether it will work or not but I have lots) and a leaf or two of woad on the top of the pile just for fun. Besides some dissolved alum (7%) and cream of tartar (6%), in one jar I poured in a 1-litre jar of old used rhubarb root dye and in the other a 1-litre jar of old used rhubarb leaf mordant. Then I filled both of them to the top with cold water, screwed on lids, labelled (because my brain ain’t what it used to be!) and put them on the deck in the sunshine. We’ll see what happens over the next few months. Perhaps I should have made more layers though? So far they’ve changed colours a little: 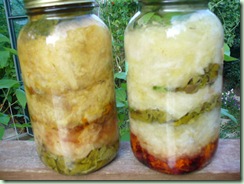 The one on the left obviously has the yellow rhubarb root in it. And the one on the right has turned quite red where the coreopsis and marigolds are. Seems to me that rhubarb leaf might be very interesting with coreopsis? Unfortunately I’ll have to wait until next spring to test because my rhubarb has died back in the summer heat.

I have one of those jars "cooking" in the sun with birch bark and a skein of wool. Looking good so far I think. I've been in the "odd" category for so long it seems normal!

You are of course quite right - it IS normal! It's those Other People who aren't, right? ;)

Thanks so much for the recipe. And I'm sorry to hear that the psorisis has flared. What a drag for you. Hope it's just a blip on the road to recovery.