What is it about this time of year that brings out all the retrospective stuff? I guess if you know where we came from then we can figure out where we’re going. Or at least we can hope to pick a direction and see where it takes us. We don’t really have a lot of control over some things, do we?

Such as, who knew that 2010 was going to be my Year of the Dermatologist? Yuck-O-Roonies! Though I suppose in hindsight things could have been much worse. They also could have been a lot better! Some doctors need re-educating in the caring and empathy department. A little “I’m sorry it’s not working but we’re trying everything we can” would help a lot. But I guess it’s too much to ask them to admit it when they don’t know something, huh? Their god-like status would then be in jeopardy and we might see that they are only human after all. Of course this does not apply to my GP. He’s pretty darn perfect as he is. And no, he’s not taking any new patients. Sorry I can’t share!

On a more positive note, my garden was better cared for than ever before because I was restricted to doing everything while wearing gloves. It did pretty well and we got quite a lot of produce out of it. I definitely made use of my new dye garden and shared the bounty with other interested folk, especially the woad blue. Actually a lot of dyeing of various sorts happened, including the old sheets for the Watercolour Quilt, a dozen pairs of cotton gloves and a lot of sock yarn, mostly for a sweater that I haven’t started yet.

My notebook says I made 2 pairs of knitted and felted slippers, complete with felt insoles, 2 pairs of legwarmers, 1 pair of tights and 5 pairs of socks. A sixth pair of kneesocks isn’t quite done yet, but they are past the heel turns. I also spun the yarn and knit 3 lace shawls and there’s 3 baby sweaters, 2 child-sized sweaters and 3 adult sweaters finished. Yes, and another hot water bottle cover, a baby blanket and 3 bibs, 2 neckwarmers and 2 iTouch cosies. The only sewing project I finished was a gift tote bag but this was also the year T-Man helped me make Debbie Double, my dress form. All in all it was rather productive, considering my hands were a mess for a majority of the time. Obviously it’s hard to stop me from creating, isn’t it?

I don’t know if my Inspirational Word for the Year really helps me focus or not but this will be the fourth one I’ve chosen: 2008 was Contentment, 2009 was Harmonize, 2010 was Conserve and 2011 will be Acceptance. I think this year was definitely one where conserving became quite important, especially in terms of my health. And I’ve already started working on acceptance: trying to come to terms with things as they are as opposed to how I wish they would be.

I’d cross my fingers that the New Year will be a much better year than this last one but it’s hard to knit like that! Here’s wishing a happy peaceful 2011 to all my Dear Readers. You don’t comment much – but I know you’re out there somewhere! My stats tell me so.

Before I forget I need to show this Christmas gift we got: a print of this painting by my daughter-in-law’s mom, Judith Fairwood (I don’t think she would mind me giving her some publicity!): 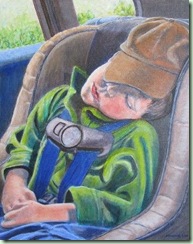 Entitled “Snooze”, that’s our mutual grandson looking much more like his dad at that age than he usually does. Isn’t it a great portrait? I just love Judith’s perspective on her subjects. The little guy just turned a Big 4 yesterday. Happy Birthday, Stargazer!

Wow, you managed to get a lot accomplished. Hope you are able to have more "hands on" time in 2011. All the best to you!

Thanks, Heather! Even I was amazed at the list when I wrote it out. That's why I keep a notebook as well as this blog. It reminds me that I'm not just sitting on my lazy a$$ all day! :D