She’s At It Again!

After not posting for nearly a week and then babbling on uselessly yesterday, today I wrote another of my boring rants – and then deleted it. You can thank me now!

Anyhoo, here’s my most recent FO that I promised: 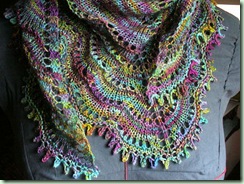 Comments:  This is a lovely pattern that works well with variegated handpaint-type sock yarns. Knit from the centre back neck (what I call the Evelyn Clark start) outward, with a plain centre and a feather-and-fan variation for the edging. The distinctive bind-off is in picots which took quite awhile to knit and makes it a little more difficult to block because I pinned each one individually. I did use wires on the top edge though.

There are 2 extra stitches on each side in the edging that don’t add anything to the design and seem to make a “hiccup” in the rhythm while knitting it. If you just work the plain section 2 rows shorter to 189 sts instead of 193 sts, then you can eliminate those. I would definitely do that if I knit this pattern again. You could also knit it one edging repeat longer because it’s quite a small shawlette or you could adjust it for finer yarn on smaller needles. But I like this size anyway just the way it is. Hope Auntie M likes it too!

You will be happy to know that one of yesterday’s concerns has been resolved: we found Juliet tomato seeds! Yes, we drove all the way out to Ladner and checked out the West Coast Seeds retail shop. And there they were. Lots of packets too. I only bought one though I tell you I was tempted to stock up! Just in case this seedy drought happens again. However I should be able to get a couple of years’ worth of plants from the one packet. They have a 3-year viability. And now we know where the store is located! We can always drive out there again next January.

Of course that wasn’t all I bought. I got some new trays and clear dome lids plus some half-size pony flats to go in them. My old used and reused ones have seen better days and several are only held together with duct tape. I will go through them and chuck out the most decrepit ones. And I also got some plastic tags and a grease pencil to mark them with. I’m tired of labelling and re-labelling flats and pots with masking tape. Though I probably should have gotten twice as many but we’ll see how it works out. Now I’m all ready to start my seedlings. Do NOT speak to me of the excessive carbon footprint attached to my quest for tomato seeds, OK? It still must be better than importing them from Mexico!

I’m sure folks who live in places with colder winters than here on the coast are aghast that I would even think of planting anything now. So I guess you don’t want to know that my garlic is already coming up? The garlic chives are a couple of inches high? I still have kale and overwintering broccoli, though the latter isn’t sending out shoots yet. Soon though. It’s somewhat colder however than it was a few days ago when we had a record 14C. There was frost this morning. But it won’t be long before it’s dry enough to turn the fall rye under and begin a new gardening season. Around here that season barely ends at all.

The shawl is beautiful - lucky aunt! Glad you found your seeds, I planted those one year - purchased the seedlings though. Great tomatoes, I understand your quest.

How exciting to have seed starting season upon us again. It really gives one hope on these grey rainy days.
My fave tomato is Black Krim, but I'm interested in trying Juliet after hearing your description.

They had Black Krim tomato seeds at the shop but I've never tried to grow them. I do buy them occasionally at the Farmers' Market and they are quite yummy - if a rather weird colour combination!