Don’t Take Your Woollies Off Yet

I know that my little indoor gardening attempt was kind of rushing the season. Even though the crocuses are out around here, it’s unfortunately getting colder again. We even had a skiff of snow yesterday to prove it. I have at least 2 flats of plants that should go out in the greenhouse every day because there’s not enough room for them under the lights but I feel bad about it. They are fairly cold-tolerant but I think freezing temps are a bit much! Though it’s not bad if the sun is shining to heat things up in there. Oh well. If we end up eating them right from the pots instead, I can always plant seeds again. As a matter of fact, I will plant them again anyhow. Succession planting is a good thing.

BTW my second try at planting weld seeds is also still not showing. After the first fail, I thought my saved seeds from last year were somewhat immature so I went back to the original (unreliable) Richter’s seed but nothing is happening. Yet. Sigh. At least I have one last plant in the garden that should give me enough material for a single dyebath when it bolts this summer. And another chance at viable seeds. The Japanese indigo isn’t showing yet either but I’m not concerned about it yet. Some things take time and I’m not really that impatient. It’s too cold out in the garden anyhow.

Changing the subject, I have some good news – baby Rosebud has now graduated to her boots-and-bar system. Yay! No more casts! Now she can have more frequent baths which she loves. She is supposed to wear it 23/7 however and the system does make it somewhat tricky to dress and change her and a lot more awkward to carry her around. You certainly can’t just pop it on and off every time you want. It takes quite a lot of effort to put the boots on correctly, snugging her feet in properly with no wrinkles in her socks and doing up both a buckle and laces. Then the bar has to be bolted on to the bottom of the boots between them and each foot turned to the correct angle before tightening the nuts. It can take 10 minutes to get it done right! But it’s still a huge improvement even though it means yet more appointments at the hospital clinic. They have to check and adjust angles and boot sizes and mommy has to learn stretching exercises to apply to her foot. It’s an ongoing process. Rosebud is definitely going to get some real use out of her granny-knit socks now! Like these ones: 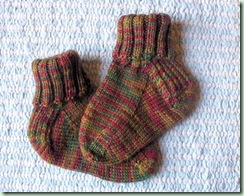 Comments: I keep knitting these for Rosebud. More to come.

Later I realised that I’d already made a pair with this yarn for a nephew’s new baby last year. He’s long grown out of them now.

I have several more finished and nearly-finished projects to share. But right now I’m on a roll with the Watercolour Quilt. Finally. You may remember my project that I started last summer when I “parfait” dyed a bunch of cotton sheets and curtains left from my late adopted mom and Thom’s late auntie. I’ve spent an inordinate amount of time since then ironing the pieces and tearing them into 8” squares: 390 of them to be exact. Then there was the undyed flannelette sheets for the batting: another 195 squares. Then I had to put them together in 195 sandwiches made from two pieces of cotton sheet in the same dyelot with a piece of flannelette in the middle.

Finally all of the sandwiches were pinned. Here’s what my study floor looked like on Sunday after I had them all strewn around: 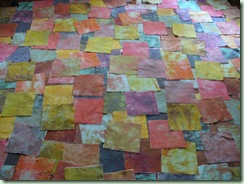 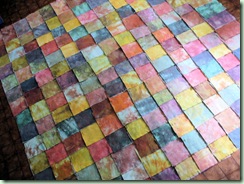 I was trying to make a “random” organisation keeping a relatively even distribution of the colours around the quilt. I think it looks pretty good! I labelled the rows with masking tape and stacked them up in order. Now I have to sew them all together with 1/2” seams. For that I was going to use random thread from the stash but I found I had a cone of size 40 quilting thread in variegated rust colours which is perfect for this project so I’m using it instead. It doesn’t fit on my sewing machine’s thread spool but it seems to stay put behind the machine with the thread guided around the spool and into the thread guides as normal.

It makes me glad for the power of my old Pfaff sewing machine that enables it to penetrate through the six layers of fabric. When joining the strips together at the seams it’s twelve layers! It’s much harder than it should be to keep an even seam allowance but hopefully once it’s all clipped and frayed you won’t be able to tell. I’ve got 3 rows done and joined together already. Figured it was easier to attach them as I go. It just gets heavier and heavier and is like wrasslin’ bears to get it under the presser foot! I’m either going to be very strong or very broken when I’m done this project. More anon.

What a huge quilt. Should be just beautiful when you're done! You'll be strong from maneuvering it around during the sewing too.

WOW, that going to be beautiful! I have a sewing machine...but I've never used it and I need to get on the ball and learn, I'd love to make a big beautiful quilt!