Guess where I’ve been this morning? The doctor’s office! And not for the reason you might expect. I woke up with the twinges of another UTI so I thought I had better get in there before the Easter holiday weekend. Or I might end up at the ER which is so not-fun on a holiday. Gotta get to these things fast or they get you good! Can be really uncomfortable but so far not too bad so I think I got it early enough. Combined with the rest of the microscopic wildlife partying in my body, I’m really having a good time these days, aren’t I? Not. Can I take a vacation from myself somehow and leave them to it?

Of course I wasn’t able to see my usual adorable doc so I got a very nice but business-like sub. She mentioned that there was nothing to be done about my Double-Whammy Viral Infections except wait them out. I knew that. I only went because I knew they could actually do something about the new problem before it got out of hand. Now I need to get some probiotic yogurt. Or I’ll have yet another infection of a fungal kind to go with everything else. Sheesh. My life is so exciting. A 5-ring circus. Somebody stop the carousel – I want to get off now. 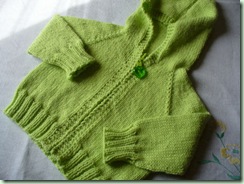 Mods: Knit ribbed cuffs and hem instead of garter stitch to make it fit tighter. Otherwise as she wrote.

Comments: I got the yarn for this sweater way back before Rosebud was even born. Remember when she was an Alien bump in her mommy’s tummy? So it’s Alien Green! It’s almost too soft and snags easily. I knitted the 12-months size because I thought the 6-months would be too small and there is no 9-months. Probably will pill and not hold up long especially since I knit it on larger needles than suggested for the yarn so it’s a bit looser than I would like. Still didn’t get gauge though so pattern works better with a light worsted or something not so squishy soft. It being slightly narrower than planned will make it fit better anyhow. Might make it into next fall. Or not. Whatever.

The pattern was easy to follow even with Germie Brain. Unfortunately I did find one error in a sleeve ribbing that will have to stay. Too late to fix. I was so happy when I found the perfect zipper at Dressew with the cute green heart! Blocking really helped to even out the sloppy knitting and now it doesn’t look half bad. You’re supposed to wash it cold and dry flat but there’s no way a mom is going to do that. I washed it hot but dried flat to pre-shrink but no idea what will happen in the dryer. We will find out, won’t we?

Haven’t done anything else interesting except that I played with the 2 free sewing stash apps that I installed the other day. Guess what? I don’t particularly like either one except for different reasons. iSewingRoom is more decorative and has a shopping list but is somewhat limited. You have to input the shopping list from scratch instead of just designating something already entered. Lots of thumb-typing and I particularly didn’t like how the onscreen keyboard covered up what you were typing after only a a few lines. It wasn’t able to scroll to see it and so typing mistakes are stuck underneath. Not very well thought out there. And I never did hear back from the seller with answers to my questions. Disinterest can cut both ways, buddy! Sewing Kit looks more “standard app” (aka not cutesy) and is also more freely adaptable but doesn’t have a designated shopping list. (It does have a wish list for patterns but not for fabrics or notions). The complaints about crashes when using the camera to add photos are true. It did crash on me the first time I tried to take a photo within the app but I was able to get it back working again. Scared me there for a minute. Does it do this every time? Dunno but yuck is all I’m saying. Also has a similar problem to iSewingRoom in that each project’s details have to be entered from scratch. You can’t just choose your already-entered items to put together your project. That wouldn’t have been hard to program, would it? They managed the feat in KnitMinder, the one I use for knitting stash and projects! Don’t really need a People section either. I mostly only sew for me. It would pretty much have only one entry. Could have used it in KnitMinder however, so there you go.

I never tried any of the other apps I mentioned because I would have to buy them first. If they resemble these ones, then they don’t do what I really want anyhow so there’s no reason to waste my money. What seemed like the best choice comes in two parts if I want both patterns and fabric lists. Obviously then I can’t pair them together! No point. So I scrapped the idea of a specific app for sewing inventories and went straight to the regular database apps. The one I ended up with is My Stuff. $4.99 for the full app and a “lite” trial version. It seems very adaptable. Useful for lots of things such as the book lists, seed lists and such that I used to keep in my Palm T/X as well as household inventory or any other stash lists I care to bother with. The only drawback is that with such power comes great responsibility…er, I have to learn how to use it and the learning curve is a bit steep. If you’re used to using a database or spreadsheet it’s probably a piece of cake. But for me, it’s kind of 3-dimensional thinking which is hard for my tiny mind. I have to draw lots of diagrams for myself to decide what information I need and where it goes. What do they call those? A data tree? It’s also kind of fun. But it’s going to take some time for this app to be really useful to me. At least the programmer has lots of information available, including a forum where he answers questions quickly and clearly. That says something to me right there.

Oh did I not mention the best part? You can work on the desktop in Excel or other favourite spreadsheet. As long as it can write CSV files which are standard comma or tab delimited text files. And then you can upload and download them to your heart’s content. Just the ability to type on a real computer is a time-saver for sure. But first you have to get things working the way you want. You can also make a backup/restore file on laptop or desktop in case things go totally awry on the handheld. The programmer chose a kind of odd way though – the files go through your wifi briefly resting on his own server before ending up back at your other device. Interesting solution. As long as he’s happy with this arrangement and doesn’t decide to go the way of the dodo bird. A bit risky probably. But nothing in Computerland is forever! I’ve had that lesson drummed into me rather thoroughly over the years. He also promises a rather huge upgrade very soon. So I guess I’ll hang in there and see what happens.

So I’ve probably lost most of you darling non-techies by now. Perhaps there will be more anon as I try to get something going properly on My Stuff. At least I have something to amuse myself with when I’m still spending so much time resting. No sewing, a little knitting (started new bibs for babykins!), minimal everything else except coughing, snivelling and reading. Nearly ready for another emergency hanky-laundering now. They are really gross and I might need to boil them in soda ash this time! I can’t use bleach, especially anywhere near my nose. Ewww….

Tons of water with some lemon or lime in it will help or take a chewable C500 every hour for the first day to acidify everything nicely!! The laying on of yogurt will stop the 'itch' too. I find the C every hour works the best with tons of water. I can usually nip it in the bud in a day or so. No point in going for a prescription because I can't take most antibiotics anymore. Good luck!!

Thanks for the advice, Dr. Sharon!