On A Wet Thursday

It’s raining today because of course T-Man watered the garden yesterday. The little sprinkles we had yesterday and the day before didn’t do much especially under the very large hazel out front. So I think we’re all watered nicely so it can stop raining now! Please. Sadly we’re supposed to be stuck with cool, cloudy, sprinkly weather for the foreseeable future. Bleh. I truly think those folks sweating back east should send us some of that sunshine so we can have some summer too. Just a thought. I’ll trade you some cool shade for it!

Well, I sewed all yesterday afternoon but I’m not finished the pleated dress yet. I struggled with the invisible zipper for quite awhile. It’s been a very long time (as in decades) since I’ve sewn an invisible zip and now I know why. Some people think it’s easier than a centre application but to me, at least, it’s a PITA! The zippers themselves seem flimsy and delicate and I hope this one lasts as long as the dress does. I basted it in several times in a vain attempt to match the checks. Didn’t help. Also I used my new invisible zipper foot for the first time: 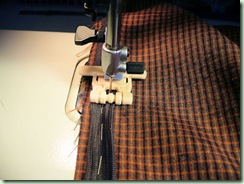 It’s ugly, weird and plastic but it does work. The shape keeps the coils rolled out and the donut in the centre pushes down the stitching line. You use the left groove for the first zipper side and then switch to the right for the second side. I wish I could use my walking foot with it though because my old Pfaff doesn’t always make even stitches without it. Only certain presser feet have the cutout in the back to allow the walking foot to click in. Instead I had to help the fabric through with my hands but gently so as not to break the needle or anything. The finished seam with the zipper looks ok now that it’s done. On the outside. I didn’t take a photo but the inside looks like a dog’s breakfast! Especially where I tried to serge the edges after the fact. If I was a sewing teacher I’d give it maybe a C-. Good thing nobody but me will see it, huh?

So far the dress looks good on Debbie Double but I think it needs a little tweaking on the princess seams over the bust and a little taking in on the side seams near the waist. I’m restricted in how much I can adjust by the fact that the pockets are already sewn in but it shouldn’t need more than a little nip. This is supposed to be a loosely-fitting dress anyhow. But not voluminous. I did stitch the princess seams/tucks down 2” further which makes it lie nicer over my tummy and behind. Otherwise it was heading into maternity territory.

My adjustments for the neckline and armholes are looking pretty good and don’t need anything further. Now I need to remember to transfer any tweaks to the pattern for next time. If there is one. It’s always helpful to know what works in case I need the information in the future – even for a different garment. It’s all a learning experience so I take notes as if I was in school! With an disappointing C- mark for my efforts too.

Switching gears to knitting news, have you seen my old buddy Sivia Harding’s newest pattern release? Her new Harmonia’s Rings Sweater is based on the Harmonia’s Rings Cowl with the same clever beaded twist at the neck. I love it and could definitely see it in a handspun yarn. Yet another addition to my never-ending queue! I’ve recently decided that if I can spend money on a magazine that doesn’t offer anything much that I’d like to knit, then I can spend the same amount on a single pattern that I really want to make. Plus the money goes directly to the designer who deserves it.

Speaking of magazines with not much of interest, I recently downloaded Interweave’s EntreKnits e-mag. After I was so thrilled about the Colorways e-mag, this one struck me as kind of meh. It seems like it’s padded and gussied up to look like more than it is. With only 5 patterns, none of which grabbed me – except maybe the 3D bracelet – it’s really depending on articles and videos for content. As usual, I haven’t even gotten around to watching the videos yet but the most interesting article to me is “Who Invented Modular Knitting” by Jenna Wilson. It’s kind of a detective story! Otherwise there’s a lot of cute digital tricks that are really just fancy advertising. Yawn. I’m going to stop jumping for these digital magazines and try to become more discriminating in my purchases.

That goes for print too. I’ve been disappointed in a few magazines lately. Is it just me? Now do I have the discipline to leave them in the store? Or will my compulsion to have the Whole Set win out? Usually if I quit a title, I quit for good. If I keep buying it, it’s because I’m expecting it to improve again. Wishful thinking? Oh horrors. Maybe I’ve finally reached some kind of saturation point? Is that even possible?

Totally agree with the rain being needed elsewhere and B.C. needing the sun. Would love to see the dress now it is made up. Nice Pattern. I might get my machine out again one day...

I am SOOOOO tired of living on the Wet Coast! This year with the mould, pollen deluge & bouncing barometric pressure, I'm constantly sneezing, coughing, aching & wiping eyes!! The damned desert is looking better all the time! My hands have been so sore that I can't even spin most days. And I think my sewing machine has rusted solid . . .