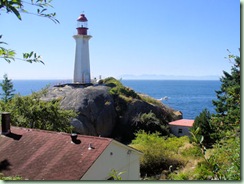 We got off to a good start on Saturday when we went for a drive in the old VW van to Lighthouse Park in West Vancouver. This trip accomplished several things: a drive to test the new fan belts in the van (in case they need adjusting), a walk in the same park where we spent the later part of our wedding day 40 years and 2 months ago, a chance to finally spread my little container of my birth mom’s ashes (only 2 years late!), and also for T-Man and I to enjoy the lovely summer weather – while we still have some to enjoy. Apart from the usual crazy traffic around the Lion’s Gate Bridge, it was a very pleasant outing.

The rest of the weekend had a definite emphasis on “labour” rather than a rest from it! We’re currently in a perhaps futile attempt to finish a bunch of things around the house before we head off on our vacation on Friday. Him: painting the van’s propane tank, caulking the cracks in the stucco on the house, painting the final parts of the front stairs, repairing the cracks in the sidewalk, putting away some of the deck furniture, and weeding and watering the front garden. Me: harvesting, cleaning up the veggie garden, planting fall rye in the empty beds, cleaning and bringing in the cactuses after their summer vacation outside, and watering every plant in sight. Etc. Whew! Labour Day, huh?

And there’s still more to do inside. Lots of cleaning and laundry as well as packing: crafts, clothes, food, electronic gear, bicycles, and everything else we might possibly need in the next 3+ weeks. Plus grocery shopping, van maintenance, a hair cut, lawn mowing…I need a holiday from the holiday preparations! And then there will be all the cleanup to do when we get back. Luckily for my sanity, we go away for this long only once a year. 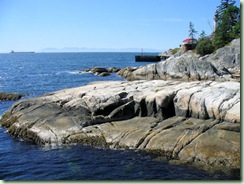 The Point Atkinson lighthouse is there, hiding behind the trees on the right. I was about to fall in the water if I climbed any further out on the rocks!

In crafty news, I had a Huge Fail with a knitted project about which I have not previously blogged. This yarn (of which I had 2 balls) has been very uncooperative: 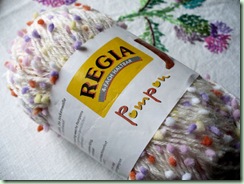 First it started out to be socks for Super-Princess until I realised that she’s sensitive to the nylon content. Frogged. Then it was going to be a sweater for Rosebud until I realised that it was way too small for her quickly growing self. Frogged again. Then it was 3/4 of the way to becoming a dress for Rosebud, one that would even fit for awhile, until…I spilled an entire large cup of tea on my knitting, including the remaining ball of yarn. Whereupon it immediately soaked up the tea and stained PERMANENTLY! Blotchy yellowish stains. That would NOT wash out. I gave it up as an absolute lost cause and threw the evil thing in the trash. The pompons made it no fun to knit anyway and I had already knit it – over and over and over. My middle name is not Sisyphus, OK? I know when to throw in the towel…er, yarn. Done. Maybe I’ll try the dress again with another yarn. Maybe I’ll rework the pattern so it’s easier to knit or find another pattern that is better. Meanwhile, I feel much better now.

Oh, it must have been very satisfying to throw that uncooperative yarn away!
Good luck with all the labour - your list IS very long - and enjoy your holiday.

Kind of you to offer, Sharon. Pardon me for yelling: NO FLIPPIN' WAY!