What an amazing vacation. We had a fabulous time! Henceforth we are to be officially known as Geezer Geyser Gazers. Heh.

But, HEY – what happened to summer? When we left it was hot and dry but now it’s raining and cold. I had to put another blanket on the bed because we were both freezing. Guess it’s autumn now for reals, huh? 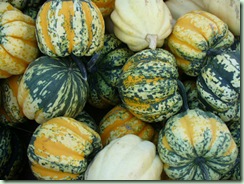 One clue is our Canadian Thanksgiving coming up in just a week. (Squashes photographed at the popular vegetable stand in beautiful and productive Keremeos. Too bad we were just starting out our holiday so we couldn’t indulge in very much of the yummy goodies available.) We will of course be spending next Sunday with a goodly chunk of the extended family. And we have many tales to tell.

We drove through 2 provinces and 5 states in total. I can’t tell you how many kilometres that was because the VW van’s odometer is busted but judging by the layers of bug bodies pasted on the poor vehicle, it was a lot! We also lost a headlight and dinged the windshield enough that it will have to be replaced. At least the awning is still intact this time! The weather was nearly perfect apart from a couple of cold mornings and a couple of sprinkles of rain. We saw plants and animals and birds and rivers and rocks and learned about such exciting subjects as spatter cones, lava tubes, pahoehoe and a’a lava, geysers, hot springs, mud pots, fumaroles, travertine, sinter and bacterial mats. Incredibly fascinating! I have over a thousand photos of my own and another 500+ photos and videos of T-Man’s to go through before I can show you some of the highlights of our adventures. Lazy Damselfly didn’t do anything much on the computer while we were gone except download all our photos from the cameras to back them up. It was a jam-packed 3 weeks, let me tell you. And with no Internet.

Even though we did lots of driving, I didn’t get nearly as much knitting done on the road as I thought I might. Of course I always bring way too much with me! Just in case, you know. I did get a goodly chunk of my Oatmeal Jacket done – but stopped because I’m thinking it might be too big across the shoulders. Boo-hoo. I need to try it on Debbie Double and reassess. Being a double seed stitch and slow to knit I’d hate to have to frog the darn thing. Instead, I started on T-Man’s Handspun Brownstone sweater and now have the sleeves and a portion of the body completed. However I only had 6 skeins of yarn spun up and will definitely need more soon. I see lots more teasing, carding, spinning and plying in my near future! I figure it’s going to take at least 5 or 6 more bobbins-full before I’m done. It’s coming out lovely though. Jared Flood not only designs great patterns but he also writes easy-to-follow pattern directions. Self-published patterns have the potential for greater clarity because the page numbers are unlimited. No need to be edited down to a magazine or book’s limited format. It’s quite refreshing.

In other crafty news, we managed to make time to shop in Portland on the way home. I went to Fabric Depot for the first time and was both overwhelmed and disappointed. It was at least 1/3 quilting fabrics which are quite lovely but not really suitable for my garment sewing. Many, if not most, fabrics were on sale but I found it a little confusing since the sale prices weren’t reflected on the bolt’s printed price. I went in there mostly interested in wools and linens but ended up skipping them as too expensive. (I’d rather support a local business if the price is so similar.) I discovered Cuddle Minky fabrics which are microfibre stretch fleece fabrics – but didn’t buy any. The one I wanted most had a short nap on one side and a fleecy side on the other. I thought it would have cost around $60 for enough yardage for the coat I would love to make so I passed on it and of course now I’m kicking myself. I just wasn’t sure how to sew with this stuff and didn’t want to make a very pricey wadder out of it! Yards are shorter than my more-familiar metres, BTW, which I found a little annoying. Yes, 4” makes a difference.

All was not lost though. I did manage to spend over $200 in spite of my shock and awe! I got 7 pieces of fabric, mostly only 2 yards each but on a couple I went for a whole 3 yards. I’ve already washed and dried them and was happy with all but the one that was 40% off, unknown fibre content, and the last 3 yards off the bolt. It’s a heavy woven twill, dark red-brown and it sadly came out of the dryer quite wrinkled and abrasion-marked. I’m hoping after a good steam press it will still be usable. A Bali rayon batik I got coordinates nicely with this fabric so I’d like to make a bottom piece (skirt and/or pants) to go with a loose shirt in the rayon. The ponte knits (a gray cotton/lycra and a dark brown rayon/lycra) came out great though as did the wild black-on-gray graphic printed slinky, the dark brown microfibre suede knit and the dark gray woven poly-microfibre. Not exactly sure what everything will become but some ideas are starting to gel in my tiny mind. Yes, I know I already have a number of pieces of fabric that still haven’t become anything. Yet. Is there a time-limit to these things that I haven’t been informed of? Didn’t think so.

Of course we also made our usual Portland Pilgrimage to Powell’s book store. I was thinking that I wouldn’t find much that I wanted (quit laughing, you lot!) because I usually buy my books online at Chapters/Indigo at a discount. However, I forgot that Powell’s is a great source for second-hand and remaindered books. So I stocked up on a few older books on fitting and sewing. I was glad that I’d earlier bought a copy of “Pants for Real People” at Fabric Depot though, because Powell’s didn’t have that one. I’ll try to remember to do a review after I get a chance to read these books. I seem to be all about the sewing these days, don’t I?

Not to be outdone, we also stopped at Frantz Art Glass for T-Man. Located near the airport in Shelton, WA, it’s a bit tricky to find the first time. T thinks it’s more exciting than any candy store! He controlled himself very well though since he still has lots of supplies left from the last visit several years ago. We’re both stocking up on tools and supplies for his retirement. Seriously. Soon.

Further up the road in Port Townsend, I ogled the funky clothing and shoes in The Clothes Horse and breezed through Diva Yarn and Wynwoods Bead Gallery, whereupon I accidentally succumbed to the lure of a couple of new Japanese bead shapes: peanut seed beads and TILA squares with 2 holes. And I haven’t beaded anything in forever either! I’m thinking stitched embellishments? Or is that just an excuse to buy new sparklies? Do I need an excuse? Nah.

OK, I need to get to work around here. Since we got home on Saturday I’ve already done 6 loads of laundry and put away a bunch of stuff. It’s my first day without T around in a month so it’s taking some adjustment. So quiet – except for the city workmen who were supposed to have finished the street work beside our house before we got back. It’s too wet to garden. Yay! Or maybe that should be Darn!But there’s lots more to catch up on. It’s been awhile.

Glad to hear that your holiday was wonderful. Anxiously awaiting some pics.