Catching Up With December

Well we had a lovely time with Rosebud on her First Birthday – in spite of missing her nap plus the four nasty immunisation pricks she got at the doctor’s and feeling rather grumpy as a result. Rosebud’s grumpy is most babies’ normal! She’s usually incredibly easygoing. Her birthday party on Saturday also went very well and she had a great time showing off her new crawling skillz while playing with her cousins. Her other grandparents made it over from Victoria so we made sure to let them have lots of time with the Birthday Girl. We live much closer and get our baby fix often so were quite willing to share. It was nice to see family and friends and to finally meet Rosebud’s new nanny now that Milady Daughter has returned to work. Good to know our littlest grandbeastie is in capable hands. And no, I didn’t take any photos. T-Man did but hasn’t shared them with me. It’s hard to get good pics in a milling group of bodies. I’m much better at photographing inanimate objects or scenery. People are difficult.

We also managed to fit lots of walking in this past weekend. Here’s a few photos from Saturday’s walk down to False Creek. I got a few new lenses and film for the Hipstamatic app on my iTouch so I thought I’d play with it! It somehow makes the ordinary look fantastic. 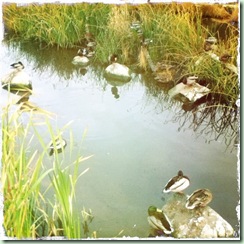 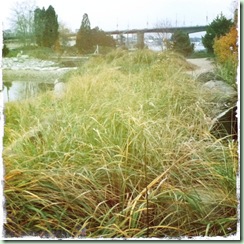 A view of Cambie Bridge from Habitat Island. We’ve nicknamed 3-Million Dollar Island because that’s apparently what it cost to put it in. It’s only a couple of years old now and people have only recently been able to access it. Birds and fish are liking it a lot so far though. 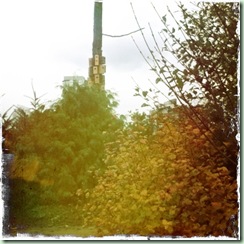 Bird houses on a snag tree, Habitat Island.
Unfortunately couldn’t catch the seagull on the top in the fog! 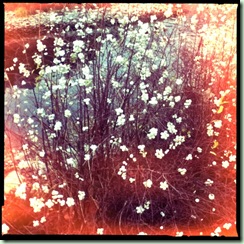 The weather was chilly but sunny so we took full advantage. Also avoiding any yard work while we were at it! Well, most of it anyhow. We did put the water garden into the greenhouse and moved the barbeque up to the top deck in its place. Now T can grill while mostly remaining out of the weather. I wonder why my poor shoulder has been sore lately? Does lugging toddlers and other heavy items around have anything to do with it? Anyway, we enjoyed some barbequed honey-garlic pork ribs that we picked up at Granville Island for dinner last night. Yummy.

I’m still knitting fingers on my Dark o’the Moon Gloves but I also slipped up and cast-on for a pair of mitts for Rosebud. It was a special request from her mom so her hands won’t get so cold on walks in the stroller. I decided to make them thumbless so she can suck her thumb (important!) but still tuck thumbs in if necessary. Also the tops will be open and ribbed long enough to cover her fingers but can be folded down if she needs her fingers. I’m really not at all sure if she’ll be content to wear them but we’re experimenting here. Since they’re pretty teeny and fast to knit it’s not a big deal if they don’t work out.

As soon as I’m done the Sucky Mitts I’ll be looking to cast on a new and hopefully more mindless pattern. I haven’t wanted to start anything for the last while in case it distracted me too much from the gloves. It’s been hard to finish them because I can only knit on them for short spurts in broad daylight. I really want to get them done asap now since my last pair are looking rather ratty and I need some replacements. Baby, it’s cold outside! Frost in December. And more than one day in a row of sunshine! Who’d a-thunk it?