I plugged away diligently yesterday and finally finished these: 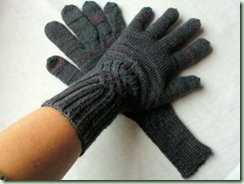 Modifications: I used smaller needles than the pattern called for to make small enough gloves for my little hands. I also made the wrist ribbing ½” longer than the pattern.

Comments: The pinky finger needs to be ¼” lower than the other fingers to fit properly on me. I knit it shorter to compensate but the gusset doesn’t touch the web between my fingers. Otherwise, these are very nice gloves. A lot fiddly to knit – but then gloves always are. The dark yarn, dark needles and dark days didn’t help! 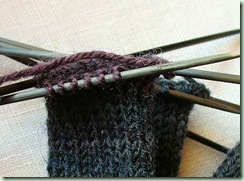 It helped a lot to work on both gloves alternately. I knit a finger and tried it on until it was nearly at the tip of my finger, then knit the other to match before doing the tip decreases and finishing them both off.

Black needles, dark yarn, fiddly pattern, winter’s lack of light, old eyes – not a great mix! I’m rather stubborn however. Especially when my hands are cold.

Now I’m working on the Sucky Baby Mitts for Rosebud. They’re currently a little farther along than this: 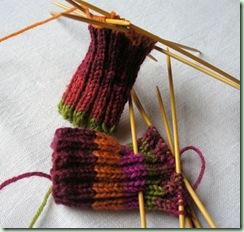 I’m making these up as I go so I’m recording the pattern on its Ravelry page – a little at a time as I finish a section. The pattern won’t be complete until the mitts are!

What else? Oh yeah, I couldn’t resist casting on something not so teeny and a lot more mindless: 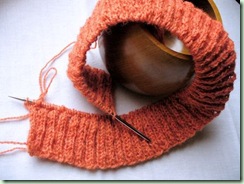 The pattern is the Shawl Collar Vest by Amanda Berka in handspun yarn from wool dyed in my home-grown madder. Since I only harvest it about every 3rd year, it’s pretty precious stuff! I have 4 balls that don’t quite match in colour so I’m using the redder ones for the collar and bottom ribs and the slightly lighter orange ones for the body. Hopefully that will look deliberate or better yet, unnoticeable. Also I hope I have enough yarn because when this is gone, there ain’t no more!

This yarn is somewhat thinner than the aran weight the pattern calls for – even lighter than worsted but I’m using the same 5mm needle size with it. The fabric is lighter but it seems to have enough body to hold its shape in the ribs. I’m knitting the largest size (40) to hopefully compensate for the not-quite-accurate gauge. Although I don’t think this shrug style needs to fit exactly anyway. This is the first project on my new Addi Lace Cliks and I like them a lot! Very smooth, exactly the right pointy-ness for me, and stable joins that don’t pop apart or catch on anything. Happiness.

I’m off to play with my Spectrum Study Group tomorrow. We’re making camel necklaces. I need to make 14 small tassels and locate some coordinating beads in the stash and I’m procrastinating…