When last I posted, I was preparing parts for a camel necklace. Unfortunately it’s still mostly just parts! My Spectrum Study Group had a delightful meeting last Thursday at the fabu West Van seaside apartment of one of our members but we didn’t really accomplish much sewing. I got 3 of the 14 tassels sewn on and that’s it. Since I’m not likely to get back to it until the New Year when we plan to work on our necklaces at our next meeting, I’m not showing anything off just yet anyhow.

Moving right along. I was fantasizing that I’d use the camel necklace for the weavers’ guild gift exchange on Thursday but no way, José! It has eaten way too much of my time and effort to casually give it away to a random recipient. Instead I had to come up with another alternative which I’m struggling to complete in time. Unfortunately I’m not blogging it until after the meeting. Some guild members read my blog! Don’t worry. It’s good. You’ll like it. <waving hello!>

So what can I talk about? On Friday after T-Man finished work we walked all the way downtown to Dressew to find fabric for this pattern: 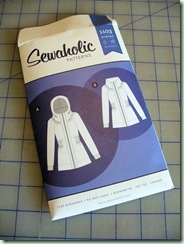 Yes, that’s local designer Sewaholic’s latest pattern, the Minoru Jacket. So cute! And I don’t have to do much adjustment to it because size 14 nearly fits me! Amazing. I merely widened the waist out a tiny bit to the size 16, shortened 3” off the sleeves and narrowed the cuff to the size 10. Yes, I have short arms and skinny wrists. Yes, these sleeves are very long. They are still long on me even after shortening them but no longer practically dragging on the ground. Oh and I’ve drafted some inseam pockets too. (The inside breast pockets are great but I need to be able to put my hands in!) If that sounds like a lot of adjusting to you, know that this is totally minimal in comparison to what I have to do to The Big 4 patterns. Tasia is a genius. (But she could have added the pockets for me. Just sayin’.)

BTW, I forgot to mention that I bought the pattern at the cute little Spool of Thread sewing lounge. Co-owner Lily told me that Tasia had brought the patterns in personally while wearing her spiffy orange version of the Minoru. How cool is that! She also told me that my favourite shop for outdoor fabrics, Outdoor Innovations, was moving – away from my ’hood at 17th and Main and nearer to them at 1005 Kingsway at Windsor. Since the shop was right in the midst of the move and I wasn’t sure yet exactly where it had relocated, that killed my plans to buy fabric for my jacket right away that very day.

Instead I waited for the opportunity to see what Dressew had to offer. The advantage was that I could get the zippers, interfacing, elastic and lining all at the same time there. And Dressew has the best selection of zips, but even so I couldn’t find a match for the separating zipper in a non-separating style for the collar (where the hood hides inside). I ended up with a separating one which I hope to be able to convert. As for the fabrics, I got these: 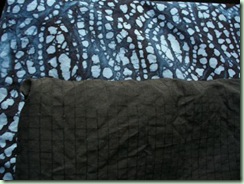 That’s a water-resistant (I tested it!) polyester fabric in black with a tiny black-on-black check, which should be ok even though the pattern isn’t recommended for plaids or stripes. Yes, it’s kind of crinkled. It came that way! It’s a permanent effect. At least I’ll never have to worry about scrunching up and wrinkling my jacket. Heh. The batik cotton lining looks so much like something I could have made myself but I know it’s very likely not dyed in the real indigo I would have used. Nice though. It was twice what the outer fabric cost – plus it’s narrower and more yardage is needed! Oh well. I love it and that’s the main thing. This is going to be a great wearable rain-repellent jacket that fits me properly for under $100. Works for me. At the same time I also got a few metres of a soft charcoal jersey knit. I couldn’t resist. It’ll be some kind of t-shirt top thingy. Or two. Charcoal gray seems to be My Colour of late. Am I trying to blend into the perpetual twilight around here?

Speaking of twilight, while we were walking home over the Cambie Bridge there was such a fabulous full moon that everyone was stopping to take pictures. I only had my iTouch which isn’t great for dim lighting but Hipstamatic always makes things look cool anyway: 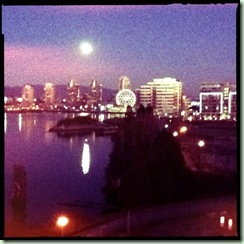 Too fun. And yes, it’s a long way home uphill. Carrying fabrics, tea and coffee from Murchies, and a few groceries as well.

On Saturday we went to the Winter Farmer’s Market and got a few yummies like Herbie fresh cheese, monster-sized eggs and a mixed variety of mushrooms. Then we went to Cob’s bakery and got some of their high-fibre breads. So good! Yesterday we spent several hours babysitting the bigger Grandbeasties while their parents went to a Christmas musical. We took them to the little local park where it was sunny but cold. Even so, Stargazer insisted on taking off his shoes and socks so he could climb up the slide with his “sticky feet”. Of course his big sister had to try it too but it didn’t take long before she decided that it was indeed too cold to run around in bare feet in December! He was harder to convince. Took even longer to get him to put his coat back on too. After we got home he was finally admitting to being chilled. Hope he doesn’t catch anything because of it. We were trying to make a point with the nearly-five-year-old that maybe warm clothing is a good idea. Silly grandparents, aren’t we?

So I still have the second Sucky Baby Mitt to finish. I’m a bit concerned that the thumb isn’t wide enough though I haven’t seen Rosebud to test it out yet. And the Madder Rose Shrug isn’t much bigger than you saw the last time. Good thing I’m not trying to keep up on the Holiday Hamster Wheel of Doom Joy that everyone else seems to be on. But where does the time go anyway? Insert picture of hourglass with sand running here…