It was windy and rainy pretty much all weekend so, apart from a quick foray for groceries during a gap in the weather, we lazed around reading and drinking copious cups of tea. OK, I always drink copious cups of tea. But I didn’t even get out of my jammies yesterday and T-Man finished an entire book in one day. Talk about relaxing!

Unfortunately though, T is starting to feel quite stressed about his job. The American-owned company he works for is in Chapter 11 and even though he plans to retire very soon, he’s feeling the tension in the workplace. He has stomach-aches and heartburn. Something needs to settle out now so he can get out of the holding pattern. Even though his head is in a confident place, his tummy isn’t listening.

Even though I’ve been super-lazy, I do have some FO’s to show off. First up: 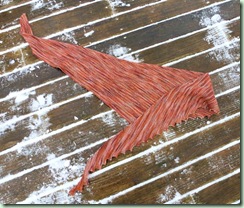 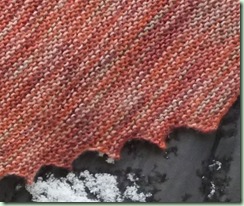 Pattern: Hitchhiker by Martina Behm. Purchased as one of a trilogy of 4 patterns. (No that’s not a typo!)

Comments: After one of my weavers’ guild members showed up with a Hitchhiker knitted from her lovely handspun, I just had to have this pattern! It’s not so much a shawlette as a triangular scarf. An easy pattern to knit. I didn’t even need the row counter after a couple of repeats. Very nice for highly variegated yarns. I used only one ball of yarn and got 35 points which is slightly smaller than the 42 points achievable with a 150g skein of Wollmeise. It’s still 6 feet long though so still long enough to wrap around nicely.

Next we have some sewing: 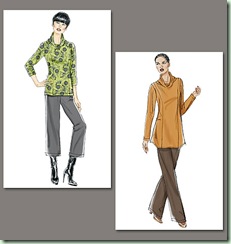 Modified:  I used my new basic shoulder, armhole and sleeve blocks to get a better fit than the original. Kept the neckline and hem as-is. I had to shorten the collar by 1” because I ran out of fabric. I also stitched it on by skewing the underside over 4” to give a more bubbled look to the cowl. I like the look that gives. Makes me feel very “Marcy Tilton”!

Comments: I used both the sewing machine and the serger to put this top together. The sewing went very quickly and easily. It fits very well although I’m currently carrying a little too much post-holiday fluff around the middle! Need to get serious about doing something about that.

I can foresee using this pattern as a basis for several new tops with sleeve, collar and hem variations.

Notice that in the photos I’m wearing the matching black Banana Skirt and a new necklace. Want to see it closer? 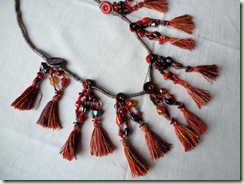 Materials:  silk, rayon and cotton threads, all dye samples or other leftover bits; buttons and beads from the stash; polyester upholstery thread. 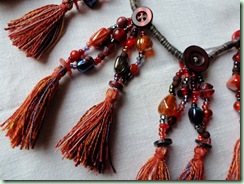 Comments:  One of our Spectrum members, Cathie, took this class at a recent conference and shared the results with the group. The Camel Necklace took a lot of work to make but all the materials were from my (admittedly copious) stash. All it cost me was the time to put it together. We had to make tassels, wrap cords, stitch buttons and add beads to join things together. Sounds easy, doesn’t it? Not. It took me one session to make the tassels, one to make the wrapped cords, 2 Spectrum meetings and one final session to finish it up.

I blocked it afterwards by spritzing with water and combing out the tassels and then leaving it to dry. Looked much better! Now I’m a very well-dressed camel.

So what else is new? I’m halfway through the latest pair of socks for my daughter-in-law. She has holes in the first pair I made her. I’m also plugging away on my qiviut neckwarmer, the Embers Cowl. I made a mistake somewhere so I need to sit down and take out a section – again. It’s not a complex pattern but somehow I keep screwing it up! At least I can fix the errors eventually. After all this is qiviut. 100% musk ox down. Nearly $100 for a single tiny little ball. Scrapping the project is not an option. Am I weird to think this was a nicer birthday gift than any old gold and diamonds? Not that anyone who actually knows me would ever give me gold and diamonds. (Hint: silver and polished rocks. Heh. Or better still, vicuna and qiviut.)

On the sewing front, I’m continuing to refine my basic block patterns for both stretch and woven fabrics. Not moving very fast but then it’s not a race, is it? I also ordered a bra-making kit from Bra-Makers Supply in Ontario. I got the CD bundle which includes the book on CD (searchable!) plus a pattern and the materials to make 2 bras, one black and one chocolate. I have long wanted to learn how to make my own bras because I can never get them to fit me properly and I hate the options available. I want colourful fabrics but I also want them simple: no padding, wire or frou-frou lace and bows. More on this later, you can be sure.

I’ve also been reading one of the new books that I bought with my Chapters/Indigo gift certificate that I got for Solstice from Milord and Milady Daughter. Yes, I spent more than the value of the certificate. Why do you ask? Oh – moving right along. The book is Patternmaking by Dennic Chunman Lo and it’s a keeper. As soon as I’m done perusing it, I’ll give you a review.

Have I made up for lost time yet?

LOVE the tunic and the necklace... very becoming!

The tunic looks great on you, the Hitchhiker looks very cool and intriguing, and the camel necklace is fabulous! It must be very satisfying to successfully finish so many projects.

They all are incredible. The tunic is awesome and the Hitchhiker is great too. Where can I get the pattern? I love easy patterns. Thanks for sharing.