Silence Is NOT Golden

The zombies didn’t stop after eating my brains. Now they’ve gone for my voice! I can barely squeak. And I have to admit that it may be all my own fault. I was feeling somewhat better (not to mention completely stir-crazy!) so I decided to go to my weavers’ guild meeting on Thursday evening. I had a ride. My library volunteer job was passed onto someone else after I already subbed for her earlier in the year. If I tried not to cough too much, what could it hurt? Actually nothing….except that I got the offer of a ride out to Abbotsford to our one and only annual Fibres West event yesterday. Originally I wasn’t going to go, preferring instead to attempt to get out to the Abbotsford Tradex to the sewing and crafts show that’s on next weekend instead. (I’m still hoping for that one.) But everyone (I’m looking at you, Donna!) said that it would be a fun schmoozefest – even if I didn’t need any yarn or spinning fibres, or anything else really. And Diana was going so I couldn’t help but tag along.

Big mistake. Don’t get me wrong, it was really fun! I had a blast chatting with all my friends old and new. I managed to avoid buying yarn or fibres. Now that was a feat of self-control. (Black alpaca…so soft! Pretty sparkly art batts! Sweet Georgia yarns. Yum.) I did succumb to one biiiggg book: 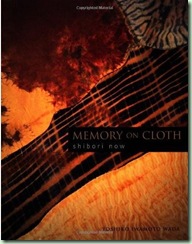 Memory On Cloth by Yoshiko Wada, 2002, on sale at Jane Stafford’s for 20% off its original $80. She’s getting out of the book biz like many other small business people who can’t compete with the big online bookstores (though I got it for cheaper than Amazon!). And I also got this big but very cute button: 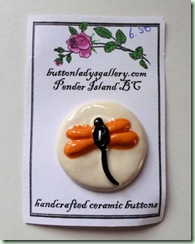 I mean really, how could I resist? It jumped into my hand. An orange damselfly! Well, yes I know it could be a dragonfly but with the absence of anatomical detail to distinguish species we’ll just call it a damselfly, OK? Apparently there are orange damselflies but the colours are reversed: orange body, black wings. But who’s checking? It was handmade on Pender Island by this artist. Check out the hot motorcycle she bought with her buttons! Now I have to come up with something that can use a rather large single button to close it. I’m thinking cowl or cardigan?

Yes, I had a really good time, chatting and looking and touching and trying not to cough on anyone. However by the time we were leaving a mere 3 hours later, I was starting to sag. And croak. My voice pretty much left me by the time we got home and it’s been, shall we say, a leetle uncertain ever since. I also felt really hot in the night and started coughing up a storm for about an hour before we both could get back to sleep. Blech.

Now I’m back to taking it super-easy and trying not to talk any more than absolutely necessary. It’s so hard! But unless T-Man is in the room right next to me he can’t hear me anyhow. I can’t speak up. Hopefully there will be no emergencies where I might need him, maybe to fend off a zombie attack? Guess I could clap loudly to get his attention. Or phone him on his cellphone? No, that wouldn’t work. He wouldn’t be able to hear me then either. Hmmm…Milady Daughter had this very symptom when she was sick even though I actually haven’t seen her but got it instead from her brother who obviously could still talk. I guess it’s certainly going around. And around. It can now go away. We don’t need no stinkin’ zombies around here.

OK, I’m boring myself (don’t know about you) with this whine and whinge session. How about a Finished Object just to distract us all? 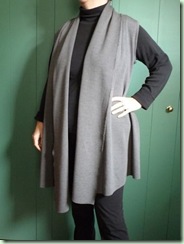 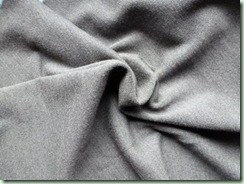 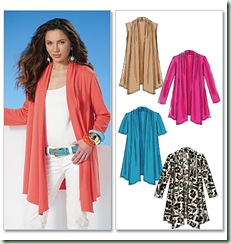 Pattern Adjustments:  I measured and wisely decided to make a size S instead of going any larger. This would have been absolutely huge if I went with my so-called “size” going by the pattern envelope! As it is, it’s still quite flowing. I made both a sloped and forward shoulder adjustment without moving the neck point because it was a little too tricky to mess with. I cut out the armhole bindings on the cross-grain (Direction of Greatest Stretch) instead of bias. No point in biasing a knit! 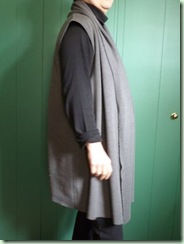 Comments:  I liked the way this fabric doesn’t fray and fuzzes up at the selvedges and cut edges in the dryer. So I cut the front edge on the selvedge and didn’t hem the bottom edge. That saved quite a bit of sewing! I finished most seams by opening them and topstitching on both sides a presser-foot-width away from the seam and then trimming the seam allowance close to the stitches. I stabilized the neck edge with stay tape before finishing that seam. The fabric was pretty thick for more than a couple of layers so trimming and not turning under the seam allowance really helped to keep it smooth. I did the armhole edge by sewing the doubled band as if it was t-shirt ribbing instead of turning it under. I also shortened it somewhat as I sewed it into a circle and then stretched it to fit as I sewed the seam. (I think would have been better as a single layer if I was to do it the way the pattern wanted me to as a narrow binding.) I trimmed the multiple seam allowances and topstitched the armhole edge through all the layers and now it lies fairly flat and doesn’t curl or flop around and the armhole isn’t too loose but just right.

I like this vest! It’s warm and cosy and you can style the collar several ways. It goes with quite a few things in my wardrobe too. I’m glad I didn’t put sleeves on it, not that I had the fabric available. I think it’s more versatile as a vest. Now it needs to go through the laundry to full up the edges to be completely finished.

You will notice that my photographer chopped off my head. He said I looked “dreamy” but not in a good way – more like rather ill! Sigh. It’s not like I can pull off good poses like some bloggers I know. Nor do either of us have very good photography skills where people are involved. Give me a mountain, lake, trees, rocks, bark, leaves, beach, desert etc. etc. But leave out the humans, please. They always come out oddly somehow.

The vest looks great on you. And I do hope you are feeling better SOON! I'm sure your garden is calling.

Poor baby, both hubby and i had IT..i had a flu shot so mine only lasted a week, L didn't and he is now into his 5th week..really sick for the first 3 weeks, now he is a weak as a kitten for the last 2 weeks.. my favorite commerical
"Pam, call my Mom"..get well soon

So envious of your trip to Fibres West, that looks like FUN!

Great button story. Thanks for the comment! I've just updated my web site. I now list everything from "buttons to bowls"~all handcrafted on Pender Island.
www.buttonladysgallery.com
Safe riding,.Wendy