A Little Sewing, A Little Knitting

Nose to the grindstone Hands to the fabric sewing up a storm! It pains me to say that I don’t have any photos yet of the two garments I recently finished. It was dark and drizzly yesterday and I couldn’t get enough light indoors. T-Man is none too happy about photographing me probably because I’m none too happy about being photographed! I’ll either get Debbie Double to model or use the tripod a little later this morning when I hope it will be light enough in my studio.

So I have two more summer tops made and a skirt ready to start sewing together. All made from leftovers so they are “free”! That is – if you don’t count my time and effort. Heh. I’m really happy with the fit of the Kirsten Kimono Tee, a free pattern download from MariaDenmark. It’s a lot more attractive on me than the Black Swing Top though I’m sure you can chalk some of that up to a better fabric choice. I used leftovers from a fairly lightweight red-brown waffle knit (first used in a cowl-necked top from last year). I can see this lengthened into a tunic or even a dress with the right fabric. My other success was another version of the top 7a from Simple Modern Sewing like the Rusty Sleeveless Top. This one has a cute Peter Pan collar that I drafted myself. It also used up the last scraps of the oatmeal linen/poly from the Anthro-Knockoff Top and the Bib-Front Shirt. Pictures and details coming soon.

Just so this isn’t a totally picture-less post, here’s the scoop on my last knitting FO that I haven’t blogged about yet: 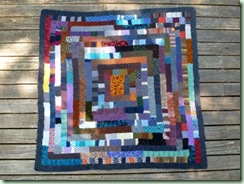 Yarns:  leftover scraps of superwash wool/nylon sock yarn, baby yarn and anything else of the right weight.

Comments:  I managed to use up the majority of my leftovers, though surprisingly there’s still some left in the bin! Either the colour or the content were too jarring. I could have kept going for several more rounds but decided that it’s large enough to cover T-Man’s lap and feet while watching TV. The colours are a little darker than mine and I finished with a round of charcoal grey.

I also am halfway through some plain socks with an Eye of Partridge heel for T-Man: 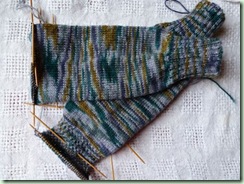 They’re a little further along than the photo now. Heels are turned and I’m on the gussets on both socks. This is leftover yarn from a pullover sweater that I made for grandson Stargazer when he was 2. Apparently he still tries to squeeze into the thing at age 5-1/2. Perhaps I should consider making him one that actually fits? At least he wears the things I make him – unlike his big sister who doesn’t!

Thanks for commenting on Project Minima. I've just been reading your blog - we have alot of similar ideas. I'll be back!

I love your blog too! Fun with artwork and some really creative refashioning. Welcome to damselfly's pond!