I had a thought while I was supposed to be sleeping one night recently. My studio space, although much more comfortable for the amount of sewing I’ve been doing lately, wasn’t totally ideal. The loom was in the way of the chair which needs to be moved between the sewing machine and the serger. There wasn’t much room behind it either for the ironing board. And the cutting table was way on the other side of the room. I hadn’t wanted to move it because the only hanging lamp was right over the middle and apart from one floor lamp that I drag around, that was the main light in the room. But then I had that thought: what if I swapped the loom and the table? I would have to come up with another light over the table but the loom would be well-lit. Another advantage of having a retired husband. He was able to give me a hand trying out my idea.

It took a little adjusting and shifting and playing around with the smaller items until I was satisfied. But, wow! I feel like I somehow have more space! How can that be if I didn’t get rid of anything? See what you think. First the view to the right from the door: 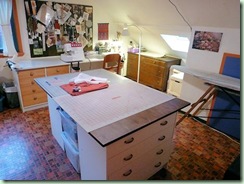 Then the view to the left: 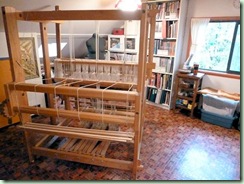 I put the loom on an angle. This is the back end. Yes, it’s a honking huge Scandinavian-style Woolhouse 8-shaft countermarche. Her name is Gertrude #27. I love her. She weaves pretty much anything I ask her to from curtains to rugs and from scarves to coats. Not that I’ve actually woven anything at all in the last 5 years. But that will soon change. I have plans.

And finally here’s a photo taken in front of the window inward: 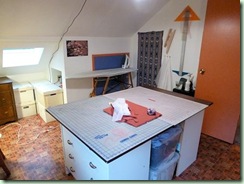 I wanted to show you how I hung the patternmaking and pressing tools on the wall. Since there’s already plenty of holes in the gyproc I didn’t mind adding a few more. Much better than in a pile on the floor, doncha think? The press cloths (cotton, silk and teflon) have been hanging there for awhile but I hung the clapper and the clothes brush along with the rulers. The water, spray bottle and ham are sitting on one of the two big old speakers I still have up here. You can just see part of the one not-quite perfect fix – that black wire going up the slanted ceiling from the plug in the wall niche. It ends at a rather homely light hanging over the table. We will be hunting asap for a replacement that is a wee bit more esthetically pleasing.

In case you haven’t seen my studio space before, the room is about 18 x 12 feet with 2 cut-outs on the short ends. Those were where our kids’ beds went when they were little each with a skylight so they could see the stars. (In theory more than in reality, it must be admitted.) The ceiling has a flat space in the middle but the ends slant down to only about 3 feet high at the back of the cut-outs. I can stand at the iron without bumping my head but have to duck after that. Those little “hobbit” doors (blue on one side, yellow on the other) lead to storage spaces. The spinning equipment one (includes guild equipment as well as my own) is tidy but the one behind the loom is…erm, kind of a disaster of boxes and bags and includes some things that probably need to be jettisoned. Some day soon. Promise. No, really.

There’s also a good-sized closet at the foot of the loom. It’s pretty tidy too but anyone know anyone who wants a really nice Leclerc bobbin rack for sectional warping? Holds 70 lovely wooden bobbins, included. (Modern ones are crappy cardboard and plastic.) Or how about a really functional 4-shaft 24” Kessenich table loom? I need to give these items some new homes. Then there’s the home-built Ashford Traveller-knockoff spinning wheel that someone gave me. It even has a jumbo plying head. But it is horrible to try to spin on. Even I can’t make it work properly. I think it’s actually a lawn ornament in disguise?

I really need the space because, oops – I succumbed to a box of fabric that my neighbour left out as a freebie. She even carried it over for me and plopped it down in my house! Yeah, I know. But I fell for the bolt of white cotton jersey on the top of the pile. Plus the 4 yards of muslin and the bolt of what turned out to be four 2-yard lengths of cotton-lycra double-knit in a bright magenta pink. (It’s dyeable, ok?) But look what else I found in there: 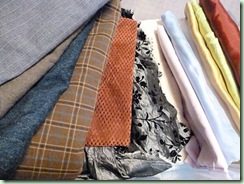 There’s enough of some of these things that I’m starting to have ideas. Except maybe the suede-like sport mesh that’s rust on one side and brown on the other. That one might take some pondering. Oh, and the grey shiny stuff with black floral flocking. It wrinkled intriguingly when I washed it. Also some small pieces of denim (skirts!) and lining. And on the bottom some cream jaquard upholstery pieces. Possibilities are legion. My brain is engaged.

Oh and look what my biggest grandbeastie is going to get: 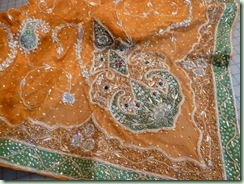 This is just one small corner. It’s a large panel of heavily embroidered orange gauze. Definitely from India. Lots of sparkles and silver bullion. And in not-too-bad shape, hopefully at least in the eyes of an 8-year-old who loves orange and anything with bling.

I now have so much going on in my creative mind I think my head is going to explode! And shhh…don’t tell anyone… it’s my birthday tomorrow. I’ll be catching up to T-Man after being the baby for the last month or so.

I am envious of your dedicated space! We just don't have the room for a craft studio around here. Oh well, perhaps one day. And what a great find! Looking forward to seeing what comes from that stash addition.

By the way, I do read your blog faithfully, but Firefox isn't letting me comment on blogs for some reason and I haven't moved all my feeds over to Chrome yet. I did, however, want to comment on your post today and wish you a very happy birthday tomorrow. I hope you have a wonderful day, Louisa. Hugs from Kelowna (well, from me in Kelowna)!

Hugs to you too, Ev! And thanks for the birthday wishes.

Have a wonderful birthday. My you have a fantastic studio,it looks well thought out. Nice and bright as well.

Happy belated returns of the day! I didn't realize our b-days were so close - mine next week. ;)
I have been a terrible blogger and blog reader lately - like the last year?

Thanks for the best wishes, Rosemary and Evelyn! I had a lovely quiet day. I hope you have a great one next week too, Evelyn!

Throw a little Bailey's in the Tea when you celebrate, old Thing!! A nice stash from your neighbor!! You wouldn't really dye that hot pink lycra/cotton wouldja?? make some leggings to go under a brown or black something or other!! Makes good winter undies too. I used to make leggings with a stirrup bottom to wear under baggy shirts in the Craft Room & as cycling shorts when I could still ride a bike . . . and that old brown check?? Great for dog or cat beds! Love the Craft Room. Wish I had one of my own again, sigh.

So sorry I missed wishing you well on your birthday -- hope it was a good one! And of course you can imagine how envious I am of your craft room.... :-)

Thanks, m'dears! Living in a boat has its own charms, doesn't it, Skipper?

BTW that studio is only half of my space. I have the whole top floor! Of course I had to bring up the kids and then encourage them to move out before I could take it all over. Mwaaa-ha-haaa!

Saw you over at Pao's place (love her too!). Glad to see you out and about! Happy birthday, by the way!

I've been sluggish on the creative side but in the last few days, all of a sudden I'm fired up and ready to sew again. I like wool, so it definitely has something to do with the weather. I'm reorganizing my space as well, although I'm not nearly as well equipped as you are. Inspiring to say the least.

I think I'd have to bribe you or the 8 yr old for that piece of embellished fabric. (I know, that's a darn shame, trying to take fabric from a child!!)

Have a glorious week!!

Thanks, Jean! You do realize I've had a very long time to collect all my equipment, don't you? Like 30 or 40 years! I rarely get rid of anything if it works ok.

Oh, you can't take the Indian piece from the Pencil Princess. She was in LOVE with it when I gave it to her today! You just need to come to Vancouver and I'll take you shopping in the Punjabi Market. Lots more of this stuff there.

Happy belated Birthday. What a nice gift to yourself - a tidy and functional studio! I can barely turn around in my alleged "work room". And good luck to you on your new weaving project. 45 inches at 21 epi? You are a crazy woman! But in a good way.

Thanks for the belated birthday greetings, Heather! You'll be happy to know I've got the draft ready (8-shaft huck) and the yarns (cotton and cottolin) and I've actually started winding the warp. It's only 36" wide, 20 epi, and 4 yards long. Easy-peasy.