Yep, I’m still here. Just been a little busy. I had to finish making tassels for some of our guild bookmarks. These will be going in the goodie bags for the ANWG conference in Bellingham, WA in June. It was kind of tedious and they are nothing spectacular but it was a good way to play with colours and use up some small bits of yarny leftovers:

I also finished knitting the new Blodgie sweater, a little late now that hot water bottle season is coming to an end: 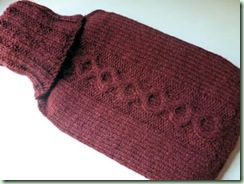 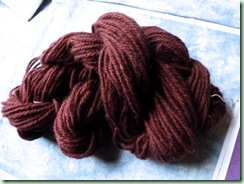 Mods:  Began with Judy’s Magic Cast-On, worked one more row of increases to 72 sts and using a different cable, the Elongated Chain Cable from Walker’s First Treasury. I also put the cable on both sides rather than just the front. Knit 6 repeats of cable patt plus 4 rows more before beg decs, added one more row of dec to 52 sts before ribbing.

Comments:  I should have kept the original number of stitches from the pattern rather than increasing because this yarn is thicker and the sweater is a little looser than I’d like. It’s totally usable anyway and is very nice on cold feet!

What else? Yesterday I went with my buddy Beryl (a gem and a jewel!) out to Cloverdale to Fibres West. Sorry I only took one very blurry photo so no pics. I always feel awkward about taking pictures at these things. The show is not large but it seemed pretty well attended this year especially considering that it was in a new venue yet again. We spent a very fun day meeting up with folks we don’t see often and others we just saw the night before at our guild meeting. I was very restrained and bought only 3 cones of superfine merino weaving yarn from Jane Stafford and 2 balls of Online sock yarn from a new-to-me yarn shop, Valley Yarn. There were lots and lots and LOTS of hand-dyed fibres and yarns – the most I’ve ever seen in one place. Personally I’m not willing to buy other people’s lovely but pricey stuff when I have plenty of stash to create my own but I know the indie-dyers are popular with a lot of people. However I’m beginning to wonder if the market is starting to over-saturate? I didn’t take any classes but I did enjoy a talk about local cashmere and received a little puff of the delicious stuff to play with. Probably enough for a couple of yards of yarn! More if I blend it with something else. It was a delightful day.

So sorry to all the folks who are still in the snow! Spring is truly here and we’ve got forsythia and daffodils out now. The sun is shining today and we’re heading off to the Farmer’s Market. I’ll try to wish some of the nice weather in your direction, minus the hail we’ve been having on and off for a few days. It could be a little warmer but I’m not going to quibble.

Forsythia? Daffodils? Farmer's Market? I'm looking at 8" of snow that fell earlier this week, and we still had leftovers from 23" a couple of weeks ago. Except for the skiers, New Englanders are very, very tired of snow!
Love the hot water bottle cozy. Luscious color and the pattern is very rich. You can send the whole thing my way if you want, since I fear I'm going to have cold feet until June!

Poor you, Dixie! Told you I was sorry! And it's the Winter Market. Full of sea food, storage apples, micro-greens, honey, jams, cheese and meats like ostrich and organic pork. A little spendy really! We just bought some herbed fromage frais and called it a day. it was a nice walk though.

So where should I send your Blodgie?

Argh, I missed Fibres West yet again!It always sneaks up on be by surprise. Glad you had fun.