Where Did I Go Wrong?

Did I mention yet that the Not-Quite-Helena Skirt still was not done with giving me a hard time? I wore it a few times and it was fine except that the hem rolls up a little occasionally as I walk. I did forget to put thread chains linking the lining to the skirt which might have helped. Luckily I didn’t add them yet. Because that &%&%$# magenta lace that I used on the hem quickly looked like this: 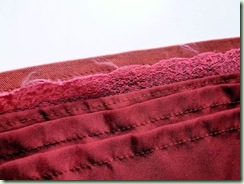 Frayed and worn. And that’s after very little wear and only one gentle laundering. Argghh! So in anger I grabbed the thing and serged off the lace just under that nearest tuck. You remember the tucks? The lining turned out too long and rather than take off the lace and reapply it, I took a few tucks to shorten it. In hindsight I should have just hacked the whole thing off and turned up a machine-stitched hem. If I’d known the lace was crap I would have. And that’s not all the trouble I had either. In serging off the lace part of the hem while in a grump, I nicked the tuck with the blade! Whereupon I just threw up my hands and slapped some Fray-Chek on it. Then I made some quick-and-dirty thread chains at the seam allowances and called it a day. Now if anything else happens to this skirt it’s going to the Sally Ann toot-sweet. You have been warned, Skirt.

Meanwhile I finished the Speckled Socks (info to come) and started the new Blodgie Sweater. Knitting the Judy’s Magic Cast-On to begin was fun! It’s a bit loose though so I may have to start over again. It’s been too long since I’ve done this so my technique is a little rusty. I’m only a few rows into it so no real loss to begin again.

Also now that I’ve solved my chart reading difficulty with the Orange Aeolian Shawl, I’ve been hooked on working on this lace knitting project. Even the disruptions while placing all the gazillion beads hasn’t discouraged me. So what is it about lace that’s so fascinating? While you’re knitting it, the darn thing looks like an old shopping bag! The transformation into gorgeous doesn’t happen until you block it. But knitting lace is really fun – at least to me. And obviously to a few others as well or we wouldn’t have so many incredible examples to show off. Over 3,500 Aeolians on Ravelry so far!

While I was knitting away, I was listening to a new-to-me podcast: Thread Cult. (You can listen at Daughter Fish’s blog or get it from iTunes.) I really enjoyed the first couple of episodes which are in an interview format. The tone is intelligent and the subjects cover more than just sewing. I was hooked right at the first episode when the discussion was about natural dyes and growing them as well. Right up my alley since I’m scheduled to give a talk to my guild on this topic next month! Give it a listen and see what you think.

Speaking of web media, I recently heard about a new web-based contest sort of like Project Runway but for knitwear called The Fiber Factor. Besides the fact that it’s only open to residents of the US, you have to be able to take your own videos and to work quickly under pressure while being judged. Those criteria alone would leave out a huge number of designers, wouldn’t it? Maybe I’m just being an old lady here but it doesn’t interest me at all. I don’t know how you feel about these Idol-type things, but I personally think they are awful! Reduced to a personality contest and a panel of judges who can’t help but be subjective, the results would be suspect at best. In this case you wouldn’t even have professional people taking care of the presentation (camera, sound, light, makeup etc.). Ick. And no, I don’t watch any of the other challenge/reality shows either. I don’t enjoy contests in general but maybe that’s just me. As they say, YMMV. (BTW, how does that work in metric?)

Too bad on the skirt. Blasted lace, anyway! I hope it holds up for you now you've repaired it.
I have to confess to being a Project Runway watcher. I'm not a junkie, but I do enjoy seeing what the designers crank out. Never, never would I want to be on the show. Life is too short for that much pressure!

Actually it's kinda funny about your skirt, especially seeing you can have your way with making bras! I think it's just too simple a job for you to get into. You need something much more intensive, complex and challenging, something I couldn't even fathom.

Obviously lots of people enjoy watching, Dixie, or PR wouldn't be so popular!

And Pao dear, bras are not really rocket science! Tailoring a jacket is more complex. And you do some amazing refashions that boggle MY mind.

Each to her own, right?