We had a visitor the other day. Not the kind of visitor you would want really since he or she perpetrated this crime: 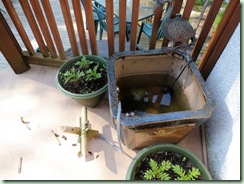 That’s our water garden with the spout pulled out and chewed up, the water half drained out and the sponge filter from the pump shredded. We suspect it was a raccoon. Again. They love the running water which unfortunately attracts their attention to our upper deck. Grrrr… It took T-Man nearly two days to fix it since he decided it was a good opportunity to take the whole thing apart and plug the leak in the bottom of the pot while he was at it. He had to make a new bamboo spout too and then reassemble everything. Just in time for some new water plants that we bought yesterday at the garden shop. Hopefully the bandits will leave it alone now. Maybe?

The weather has been lovely and warm. Here’s the veggie garden at the moment: 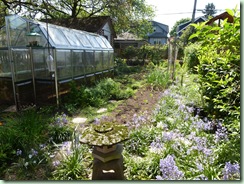 You can practically watch things growing! Those masses of Spanish bluebells are really a pesky weed. Pretty for a few weeks in spring but they are everywhere and cannot be easily discouraged. I blithely pull them out right after they finish flowering – leaves and occasional bulbs and all – and they just keep coming back every year. If only the edible plants were nearly as hardy and prolific. I’m done with planting this garden for now. The beans are in which are the last seeds to be planted directly. Now we just water and weed and harvest as necessary. Sounds easy, doesn’t it? Ahem.

And I have one FO for you: 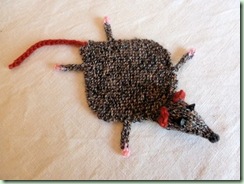 Comments:  This little guy is so dang cute (in a warped sort of way) that T-Man absconded with him! At least I have enough yarn left to make another one. The pattern is not particularly easy to follow but the results are worth darning in a lot of ends. 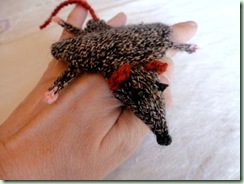 OK, this should hold you for the nonce since if I’m going to get my fish and chips lunch I’ve been promised at Granville Island today, I’d better get a wiggle on. Or it’ll be supper instead.

ah, Louisa, it's nice to catch up with with blog and wish you belated congratulations on your anniversary. And you have been so productive with the sewing and knitting! Lovely stuff, even the flat rat!

Thank you, sweetie! I may not be fast but I'm persistent. ;)