Gee, not doing very well at posting regularly, am I? It’s been a combination of running errands, family stuff and lazing about reading a lot. The weather has been alternating between damp and downright soggy. Too dark to do much close work or take half-decent photos. That’s my excuse and I’m sticking to it!

I do have one FO done however. First of the year! Of course it’s boring old socks: 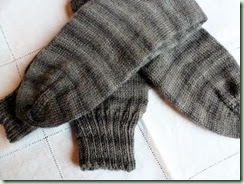 Comments:  Another pair to add to the drawer.

Also on the subject of socks, my dear niece Alison’s sweet boyfriend has asked for a pair of his own. He hinted that his favourite colour is blue so I decided to dye some of the medium gray Confetti sock yarn in navy. I miscalculated slightly and ended up with quite a dark navy blue when I was going for a lighter value but oh, well. He gets what he gets, right? I’d take a photo but it just looks…dark.

In frustration at needing something easy to knit, I began swatching for the aptly-named Plain & Simple Pullover by Veera Välimäki. I’ve had this one in the queue for quite awhile and even chose the yarn: some dark green 2/8 Shetland from the deep weaving stash. It’s kind of icky to knit with because it’s dusty and oily and scratchy but it blooms nicely and softens somewhat when washed. I had to try again after the first swatch (on the bottom of the pile) with the recommended 3mm needle. 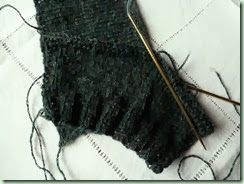 The second swatch (on the top and not yet washed and blocked) used a 2.75mm needle. Of course I measured it again after washing and it’s pretty much on the nose for gauge. BTW the KnitGauge app on my iTouch was invaluable for this! 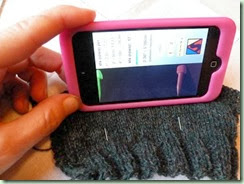 It’s a mere $.99 and works for iPad, iPhone, and iTouch. You just put 2 pins in your knitting and count the stitches between them. Doesn’t have to be in exact inches. Move the slider to the number of stitches you counted, then line the green pin up with your first real pin and slide the pink one over to your second pin. The app will automatically show the exact number of stitches (to 2 decimal places) for 1, 2 or 4 inches. It’s much more accurate than I can count with a regular ruler.

Naturally I’m going to have to adjust the pullover pattern to fit me. So what else is new? I started with the XL which gives about 2” of ease for my hip and will dec toward the waist until I get to the M size then follow that the rest of the way up. At the bust the M is about 2” of negative ease on me. I don’t think it will be too tight but I can try it on to see as I go. The gauge actually gets a tiny bit looser after washing quite vigorously so if it fits well enough even unblocked it will be fine. This is going to be a longer project with a lot of plain knitting! Luckily I love that I can read while I’m doing it.

What else? I still have the buttonholes and buttons to add to my latest Marcy jacket/vest. I ran out of bobbin thread in the middle of the first buttonhole and now I keep avoiding finishing it for some reason. Maybe the lack of light these days is a factor? I decided to pick out the machine stitching on the armhole binding. Here’s the left side before: 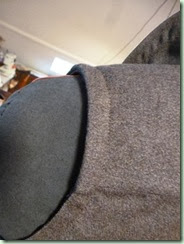 Since there’s no other topstitching except on the drawstring channel it didn’t look quite right. Here’s the right side after slip stitching instead: 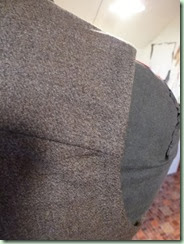 Maybe I’m being hyper-picky but I think it looks better now. The jacket is really looking very nice! If only I could force myself to complete the darn thing. Oh well. It’s not a contest, is it?

Oh it does look better without the top stitching around the armhole, now that we can see the alternative. Which Tilton jacket/vest is this one? I guess we'll see when it's done...

What wonderful, thoughtful gifts from your blog friend, Heather.

Saw your gloves, Pao. They are very cool! I never think to sew them because I have so many knitted ones.

Vest/jacket thingy is the dress V8876 without sleeves or the bottom hem band. It's soooo close to done!