Woke up this morning to another skiff of snow: 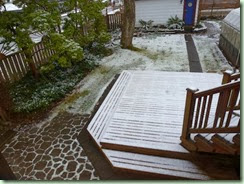 So what is about Sundays and snow? Anyway it wasn’t really much and it’s already melting. It just seems odd after it was so warm and sunny on Friday! It got up to a whole 12C. (that’s nearly 54 degrees F. for those who are metric-averse) and was so hot inside my greenhouse that the automatic windows opened wide! It was lovely to go for a nice long walk wearing a tunic and a sleeveless vest instead of layers of woollies. We enjoyed seeing the crocuses and snowdrops and blooming heather and all the other signs of spring. But then it was back to winter again. I’m getting whiplash.

So how did it get to be March already? February just flew by. I guess it’s because it’s such a short month? Or time flies when one is having fun! I’ve cut out several more garments. This time I used some beefy RPL double-knit in a reddish-brown. (Yes, more “drab” colours. Sorry, Sharon!) I had 2 pieces of this bought at two different stores on separate occasions a year apart. Obviously I liked it! Each piece was only 2 yards (a hint that I bought them in Portland since we mostly see fabrics sold in metres here in Canada) and it was a little narrower than usual at 54” wide. I was glad to have the extra since I would have had to piece the sleeves by adding cuffs because the dress I wanted wouldn’t have fit on it otherwise. And because I had the extra I was able to get a pair of pants and a top out of it as well as the dress! I have to piece a front yoke on the top but that’s just fine as a design line.

One good thing about having lots of patterns and ideas for a given piece of fabric is that I can get the most out of the layout. I never follow the pattern’s layout! You might recall that with the last 3M piece of fabric, the charcoal jersey, I was able to cut 3 tops and sleeves and bands for a fourth. It was extra-wide at about 62” and those were metres instead of yards which helped but that’s still pretty efficient cutting. I also cut out the body of the fourth top from 2 yards of a black and very crinkly-stretchy poly gauze with lycra threads woven in every 1/8th inch. I still have enough left for something else as well but couldn’t figure out what quite yet. In this case I really want to see how this novelty fabric sews up first before I decide on what type of garment the rest of it wants to become. It also has the most lovely fringed selvedge for which I really should find a use somewhere. It’s too cool to waste.

So now I have to sew the black crinkle top and my Vogue 8499 Marcy Tilton skirt (which I don’t think I mentioned yet) before I go on to the next 4 brown pieces. That little efficiency saves me having to change serger threads so often. In my 4 browns I’m also counting the Butterick 5954 that I cut out quite awhile ago. I think I’d better finish this voluminous tunic before it gets too warm to wear it, huh? Just cranking ’em out here! I am so determined to have a Very Me Everyday Wardrobe.

In knitting news, I finished the Blue Boyfriend Socks. (I changed their name because they were originally the Blue January Socks and it took me until March to finish them!) Now I have to wait for a family get-together to present them to my niece’s boyfriend. Since she’s currently in Africa, it’ll probably be awhile before they get to him. Oh well. They will wait.

And I’m on the yoke of the Simple Tweedy Pullover sweater based on the Plain and Simple Pullover by Veera Välimäki. It’s coming along fine even though I re-jigged the numbers to fit my shape better. For some reason I have 2 extra stitches but they’re easy to deal with in this tiny gauge. I think I messed up a decrease somewhere but I can’t see it so it doesn’t matter. Once I finish the yoke/cap sleeves then it’s on to the button plackets and the collar. Getting there. The shape might be “simple” but the knitting isn’t really that simple at all. There is sewing of seams and picking up of stitches. I was getting spoiled for top-down yoke cardigans where you have hardly any ends to stitch in and no sewing at all. Not that I really mind it, just that it’s kind of a hitch in the flow of knitting a sweater. At least it’s not knit completely in separate pieces. I’m totally over that method of sweater construction. I save it for fabrics! And use a sewing machine.

What else? Oh yeah. The Retro Rib Socks in Tough Love “Phoenix Rising” are coming along nicely. I need a photo for my Ravelry page. This colourway is so pretty: fiery orange-reds and black. It’s coming out in semi-stripes on my 64 sts and it’ll be interesting to see if it maintains the patterning or not. You never know when yarn is dye-painted in the skein and not as regular as the commercially printed yarns. However I’m actually developing a fondness for semi-solids rather than truly variegated colours now. But since this is in socks, it isn’t critical.

BTW, have you heard that Ravelry is up to 4 million members now? That’s what you get when you do something very right! Getting lots of volunteer help, listening to what your members really want and giving it to them in a timely manner. Providing a truly functional and useful platform. Being respectful of people’s needs and desires. Acting like our friends and fellow crafties rather than corporate bigwigs. I think Jess and Casey have got it and I so wish the sewing people would get it right too. Just sayin’.

You're just a sewing (and knitting)dynamo!

This from the woman who stitches incredible art pieces mostly by hand? I just make clothes. To wear. And wear out!

Snow. Tell me about it. I haven't seen the ground here for the last 3 months!

Oh, oh, I have both those patterns. I've made the Tilton skirt with big pockets - out of corduroy, brown. I didn't have 2 matching zippers for the pockets, so one of them is purple! Also, I found I didn't really need to have a zipper in back what with the elasticized waist, so you could eliminate that if you want to. Just saying.