Hello again! I spoke too soon – our Easter wasn’t quite as quiet as we expected. There was a bit of a crisis at our son’s house so we ended up going over there at the last minute. We weren’t really very useful (except Thom got their wifi set up finally) but at least we got a walk in the damp forest along the Pitt River and some sushi with the family. (Plus a delightful phone call from the Littlest Grandbeastie.) We will not speak of ongoing sagas with furnaces, hot water heaters, sump pumps and installation/repair men, ok?

Except that we have Good News in the repair department – Thom finally found a local auto repair shop that we can trust to properly fix our dear old VW van. Yay! She’s over there now getting her transmission hauled and refurbished and hopefully all will be well so that we can actually get some camping in this year. It’ll take a couple of weeks to complete so luckily we have a spare vehicle with the MINI-Cooper. (Not that we use either of them much! We tend to walk if possible.) Then there’s the negative to counter the positive news – the other day some $#!^-head managed to break the driver’s door lock on the van. Again. When will they learn there is nothing in there to steal? Unless they wanted to make a cup of tea? Didn’t think so. Grrr…another repair expense that we didn’t need.

Meanwhile we have a little knitting: Do you like how I test each finger for exact length? That’s the advantage of knitting my own gloves! They really fit. If you embiggen it you might even be able to see the Channel Island cast-on that I started the cuff with. It makes a vaguely picot edge and is very stretchy. I tried a new way to begin this cast-on without the slip-knot, similar to the way I begin the long-tail cast-on (good tutorial series of photos here). I like it much better. And this tutorial is similar to the way I do the Channel Island except that they have too many ends to deal with. Instead I begin with a loop of the main yarn for the doubled tail as in this tutorial – except I leave out the slip knot and begin with the double-loop stitch which holds well enough instead. Clear as hot chocolate for you? It does make a really nice edge for the k1/p1 rib. When you go to knit the next round, make sure you’re working your knits into the picot stitches and purls into the single loops which naturally recede. And there ya go. You’re welcome.

So this wildly speckled glove is now finished but the second one started off quite differently in the yarn patterning so they aren’t making a pair even by my admittedly lax standards. I just may finish it anyhow and then make another that hopefully will match this first one better. And the fourth one won’t have to match anything because I plan to overdye the second pair until they are nearly black. Or something. We’ll find out eventually how this goes, won’t we?

Up in the studio the sewing is still stalled out. I’m beginning to suspect that I’m avoiding dealing with the Tilton Skirt entirely. So I’ve decided that I’m going to really put it in the doghouse for now and sweep my plate clean so I can get back to work there. There are lots more patterns and fabrics in the queue! I’m not giving up on it entirely but I think I need some real time away from it so I can deal with it again. Somehow it’s one of those dogs that just doesn’t go the way you expect even though it shouldn’t be at all difficult. No idea how this happens but it just does occasionally. I’m betting that it will be too warm to wear an underlined wool skirt around here soon anyway. It can even wait until next autumn if it has to because chances are I won’t be needing it until then. So there.

Whew! That feels better! Now what else did I have in the pile of cut fabrics? Probably things that would be better worn in cold weather. Oh well. If I can knit gloves in spring I can sew long-sleeved dresses in spring too. Why not? It’s not like the Couture Police are going to give me a ticket for sewing out of season! And I seem to remember a more summer-ish vest/top thing of Katherine Tilton’s. It’s on the bottom of the pile now but that can be remedied.

In gardening news, it’s been raining and sunny alternately but it’s still pretty darned chilly. The tomatoes and indigo have been coming in at night: 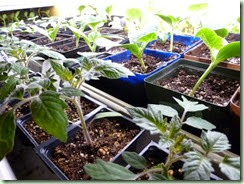 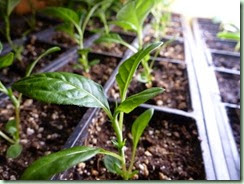 …while the cukes and squashes stay under the lights full-time: 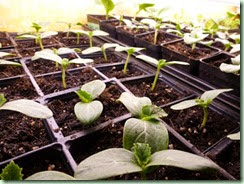 They still look awfully little especially when compared to the garden centre’s offerings but I’d rather they were small when they go out in the garden than be held too long in pots. Some of the stuff in the greenhouse is starting to look a little stalled now however despite my best efforts but I’m still loathe to plant everything out quite yet. It’s still been going down to as low as 7C (45F) at night and the days are only about 12 or 13C (55F). Not particularly toasty yet. We did have one warm day that got up to a whole 18C a week or so ago but it’s been nowhere near that nice since. That’s spring on the Wet Coast for ya. Predictable in its unpredictability. Don’t forget an umbrella.

Great looking glove! Too bad the second one isn't matching at all. Overdying them might be the answer.
Good decision to put the Tilton skirt away. Sometimes you just have to do that in order to move ahead. I know you'll come back to it in time.

Now why should your gloves match anyway? Am I right?

I think that Tilton skirt was just too easy for you. You need more challenging things to sew. Like, aren't you one of those who did that bra sew-a-long with no problemo? While I didn't even get onto first base?!! And then you went on to make several more like la-de-da just to show off!!!!

And look at your garden grow. Our backyard is as usual: Mud and sticks. And that's okay. Right now I am suffering from a lousy cold. cough-cough. No sewing for a week now.

At the rate I'm going no two out of the 4 gloves will match even vaguely. Oh well.

I like those gloves too. Who says they have to match?? Shove all four into the bag & pull out two to wear. Just like socks. If you're anal about matching - get two matching balls of yarn & make them match!! Or put a solid colored band on the wrist so they have the 'appearance' of being a pair. Haha
Good thing to file the skirt until you get your mojo going on other things. Sometimes the mojo gets liked with a project & won't fire up but I think you'll be fine, as someone already said, you did the Bra thing, over and over and over again so you'll be okay. That little picot cast on is the first thing I learned from my Cast On, Bind Off book when I bought it. Great edge for a glove or sock!!!

You're right to keep the veggie starts small, at least according to Linda Gilkenson. She doesn't even sow her tomato seeds until the end of March! I tried that this year and the little guys are getting up to speed no problem, even with my makeshift greenhouse. And apparently we are due for a week of warm sun!

Ooh, warm sun! How nice. Guess some things will finally get into the ground!