My brain is tired and my mouse-hand is even tired-er. It’s been hard work but I think I’ve conquered the travel plans for this year’s vacation! And WOW!!! It’s going to be fun! Probably also very hot and dry. There are water falls, lava tubes, Anasazi ruins, rocks of all colours and shapes, petroglyphs, canyons, deserts, mountains and, eventually, ocean beaches. Nine Western US states in total, two of them twice – a big loop. Also fabric shopping because I can’t go through Portland without hitting the Mill End Store and Pendleton Woollen Mill Store. They’re very near each other on the same road so it’s not too big of a diversion.

However, because it’s so far to go we’ve decided to leave earlier than we’d originally planned. Which means we’re heading out a week from Wednesday so we’ll need to step up the prep and packing. What doesn’t get done won’t until we get back. Oh well. I’ll have to kiss my garden goodbye for the season. Some things did really well this year including my coleus in the deck pots. Most of them were grown from seeds. This year the leaves on some were huge! 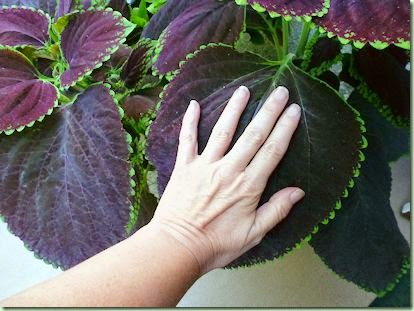 Like the “Kong” variety but these aren’t. The ones I bought were because the seeds aren’t on offer. These “Mehndi” were particularly colourful: 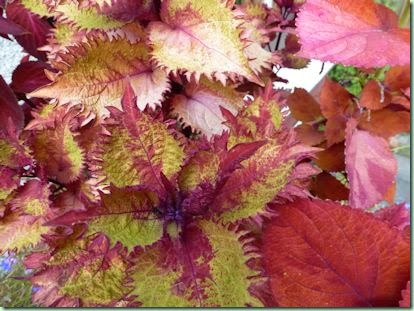 On the right you can see the “Sedona” in gorgeous red rock colours. I love colourful leaves even better than colourful flowers. Yes, odd, I know. I’ll get over it. ;)

Meanwhile, I did finish my second pair of Toe-Up Shortie Socks from the same ball of DGB Confetti: 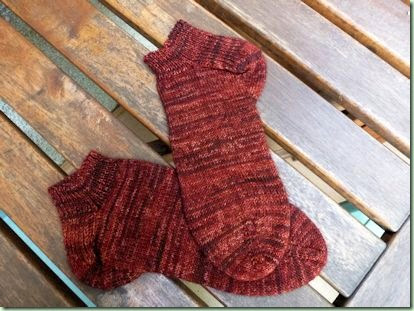 Again I used my slightly modified version of Wendy D. Johnson’s Toe-Up Socks With A Difference. I’m now starting to get the hang of it though that’s not to say I didn’t have to rip out the heel turn twice on the second sock! I also haven’t figured out how to size it up for Thom or someone else with larger feet than mine. That shouldn’t be too hard though now that I’m more familiar with how it works. They look silly off the feet but fit very closely especially under the arch and heel.

I dyed this pair when they were done just to make them different from the earlier pair from the same yarn. I used some Lanaset Red plus a bit of Black that I had premixed and never used and dyed them in the craft microwave. Now they’re kind of a burgundy but light enough so that the stripey bits still show. Yeah, I’m too lazy to do a proper FO post. If you want more deets you can go to the Ravelry page.

It seems like posting to this blog is going to get a little rare to non-existent in the next while. So sorry! First of all, this next week is going to be crazy busy getting ready to go. (Aaakkk!!!) Also, unless there are more places to get wifi than I’ve encountered in my Googling, I will be very hard-pressed to get out an account of the trip while it’s actually happening. I hope to at least keep writing posts and saving them up for whenever there’s an opportunity to send them. Best I can promise for now.

More when I can!

Hope you have a wonderful trip. Sounds like Arizona is part of the loop?

Hope you have a great trip, with time for relaxing as well as sight seeing! Too bad your plants won't survive your absence. Your coleus are beautiful!

Good luck on your trip. Hope you bring home lots of interesting stuff for the blog!!! And do try to post a blog or two along the way to let us know you're alive & well. All Mcdonalds, Starbucks & Safeway stores have internet which can be accessed in the parking lots. So get a tea, sit in the lot & let us know how it's going. Have a great time.

Thanks for the good wishes, my dears!

And Sharon: I'm not sure about Safeways down there having wifi. They're a different company than the Canadian ones. But the Starbucks and McDonalds are a good bet. If we have time to stop!

Have a wonderful vacation, doing and seeing whatever you want. And don't forget knitting!