One more sleep! We’re nearly as ready as we’ll ever be. But first I have to show you the very cool yarns I dyed. Remember the skeins of superwash wool/nylon sock yarn that I dyed first in gardenia yellow, then dipped in my home-grown Japanese indigo? I wanted yet another colour on it so I put a few of the walnuts that the squirrels have been chopping off my tree into a bucket, filled it with water, popped on a lid and left it in the sun for several days. It started to ferment slightly and get a little bubbly. It also got a bit mouldy but not too bad. Yesterday I dumped it, mould and all, into a small-ish dyepot and brought it up to a near-boil for about an hour. It actually doesn’t smell bad at all. Just kind of spicy and earthy – sort of like the way it smells when I rake the walnut leaves in the fall. Then I stuck the darkest end of the yellow and green skeins into the pot, leaving the walnuts in, and kept them there on a simmer for only about half an hour. I was quite surprised at how deep the colour got!

Here’s the sequence - first there was gardenia yellow: 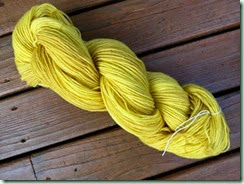 Next there was Japanese indigo blue on top: 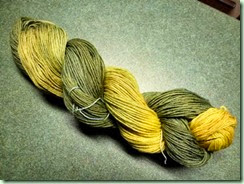 And last there was dark walnut brown on the ends: 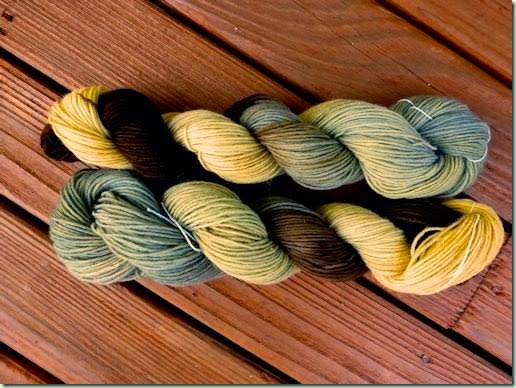 Now I’m really liking this colour combination much better! Interestingly this sock yarn has had no mordant applied, only substantive dyes. It still bleeds a little when washed but hasn’t gotten much lighter in colour and I’m sure it’ll stop leaking after a few more rinses. I wonder if the dyes underneath the walnut brown helped it to become darker than it normally does or if it was just because of the strongly concentrated bath. I’ve never gotten such a dark shade before from my English (aka Persian) walnuts. Of course superwash wool/nylon dyes really easily and deeply anyway. So satisfying.

Flushed with this success I hunted up another skein of sock yarn, this one from a different source and already in skein form. I had to add a little more water to the dyepot because there wasn’t much left at this point since I never pre-soaked my skeins first so instead the wool absorbed a lot more of the dyebath than usual. This second skein (115g) was also not mordanted first. I tucked it down into the walnut husks which were now starting to soften enough to break up into bits but leaving the walnut shells intact. It’s the outer green hulls that carry the dye of course. (I’m looking at my pant leg here with a tan stain where I knelt on a walnut in the grass by accident! These grey cotton knit pants have been machine washed and dried twice since then with no change in the stain. Seems pretty permanent as a dyestuff, no?)

Of course I couldn’t leave well enough alone when I decided that I really wanted quite a variegated skein so I went out to the dye garden and picked a handful of annual coreopsis flowers. These I poked down into the lighter parts of the skein hoping to give the browns a little warmer cast. Don’t know how colourfast they’ll be without a mordant but my fingernails are stained and it doesn’t wash off! (I sound very colourful, don’t I?) Eventually I turned off the stove and just left the pot to cool overnight.

I thought the walnut gunk was going to be a bit of a pain to wash off the yarn. This was after it sat overnight. Doesn’t that look rather disgusting? 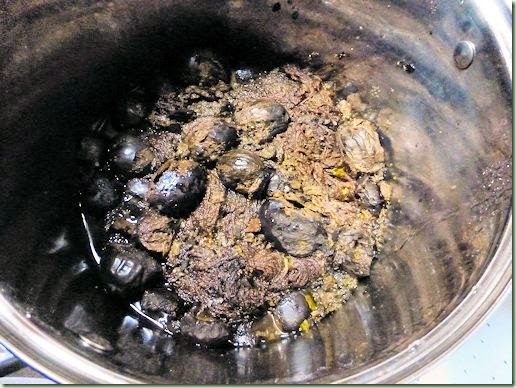 Yes, there’s a whole skein of yarn in that goo somewhere. Usually I carefully sieve out the plant matter before dyeing in the liquid but I wanted a more speckled and blotchy yarn and hopefully a deeper colour from direct contact with the dyestuff. 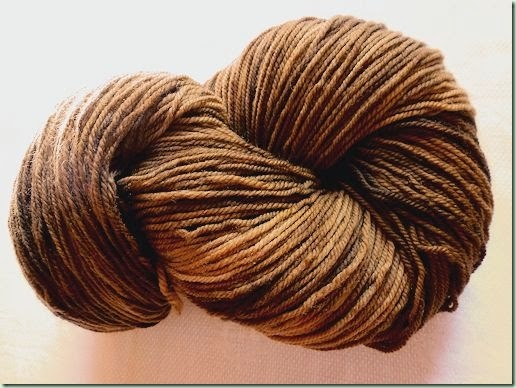 I think it was pretty successful! It’s a lovely golden brown and somewhat variegated all over. Just the way I wanted it. It still smells a little of walnut husks. Luckily not unpleasant really. This will probably become socks for Thom since he quite likes the colours – and the odour! But not anytime soon. I already have my travel knitting selected.

Well, the van is partially packed. The rest of the gear is waiting for tomorrow. I’m still watering my veggie garden. Off to see if I can find something left in this house to eat for dinner. I have enough milk and half an apple left for our oatmeal tomorrow. Pickings are a little slim but there’s still a few more items that need eating up.

Have a wonderful trip, and happy knitting along the way!

ooo, the yarn dying is amazing. Such beautiful colors straight from the garden. All that magic. Happy vacationing.

Have a good travel ! Cant wait to read about the adventures

wonderful dyeing. have a great trip, we may well be into autumn when you return.

I'm glad it's you digging through that muck & not me!! Have a good trip & do try to blog a little more often. Starbucks, Safeway & Mcdonalds do have the internet even from the parking lot!!! Have a great time.

Thanks, All! We're having a good time so far! On to Idaho tomorrow.