Well that was a terrifying experience!!! I got stung by a wasp yesterday and didn’t use my epi-pen!!! The reaction, while uncomfortable, was normal and I didn’t go into anaphylactic shock the way I did the last time I got stung. That was quite a few years ago now. Why didn’t I have the same reaction this time? No idea. But I was reluctant to use the pen immediately because then I would have to go to the ER right away – a total waste of at least 3 hours of my life if it wasn’t necessary. Unless I really needed to use it of course. Saving my life is definitely a priority!

Instead I took a couple of antihistamines, iced the area (right in my soft belly near my belly button) and waited, monitoring my skin and breathing. The last time the reaction was pretty immediate with a blotchy red face and neck and difficulty getting a breath. Nope. This time all was fine apart from some pain and itching and swelling around the puncture site. I can still feel it today and the area is a bit red and very itchy but otherwise I’m fine. Had to find something soft and non-binding to wear so I’m swanning around in my handwoven Celadon Dress.

Yeah, yeah, I know. I probably shouldn’t have hesitated but we live only a short distance from the hospital. If necessary Thom could have gotten me there almost faster than we could dial 911. It ended up being the right call anyway. Possible crisis averted. So what did I do to deserve getting stung? Nothing! Unlike a lot of people I’m not afraid of wasps or bees. Usually we have a truce: I don’t hurt them and they don’t hurt me. This time I was innocently sitting at my kitchen table reading a book when I felt little insect feet scrabbling under my shirt. Before I could unbutton it, the beast stung me so I flung off the shirt and my pants too because I couldn’t find where it had gone and didn’t want to get stung twice. Thom found it later by the window looking a little the worse for wear. Serves it right, I say!

Back to more crafty things where I’m currently warping up the loom for another project. This weave will hopefully go easier than the last one! (Gee, how can it not?) I’m making a one-off scarf using a pattern from the free e-book How to Weave a Scarf from Weaving Today: 7 Handwoven Scarves. This is #3, the Big Bumps Scarf by Madelyn van der Hoogt. 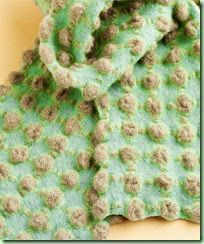 I’m calling my version the Mountains & Valleys Scarf because the natural silk tweed reminds me of snow-capped mountains and the black Jagger superfine merino represents the valleys. So far I’m at this point: 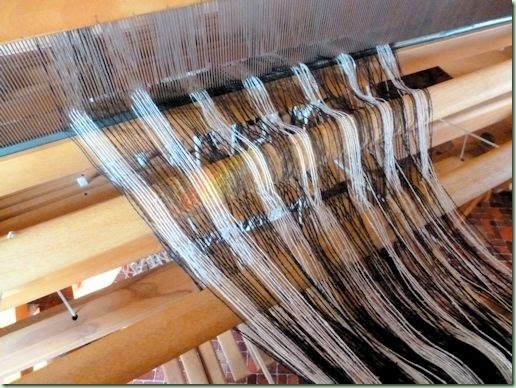 About 1/4 of the way through the threading. It’s going very quickly compared to the last project! This weave structure is (I think) a 2-block deflected double-weave where the two different warps are woven only with their own respective wefts and just float over each other rather than interlocking. Here’s part of the draft so you can see what I mean: 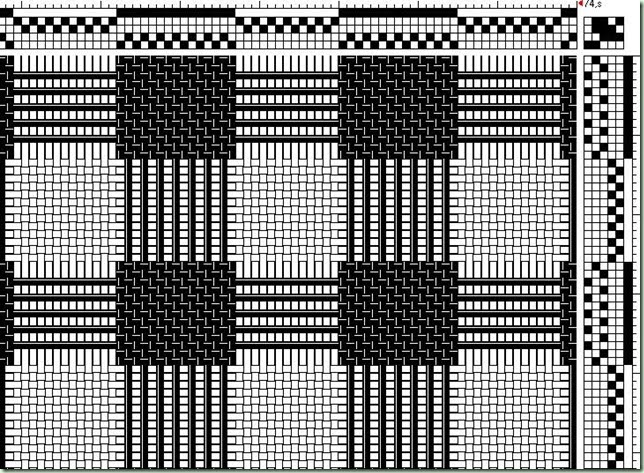 The actual texture doesn’t happen until the cloth is wet-finished and in this case is even more dramatic than regular deflected double-weave with the added action of the shrinking (fulling) vs non-shrinking areas. As soon a I finish warping and get some woven up I’ll take another photo. In this particular weave the wool is sett 10 ends per inch (1 per dent in a 10-dent reed) but the silk is sett at 20 (doubled in each dent, except for the last thread in a group which is sleyed singly). When I go to weave this I’ll have to be sure to only press the wool into place carefully or it will be beaten too hard. The spaces are needed so it will have room to full up properly leaving the silk which doesn’t shrink to bubble. It’s 14.25” wide in the reed but is supposed to end up at less than half that width and correspondingly you have to weave enough for the length to shrink bigtime as well. So much fun on 4 shafts!

What else do I have going? Oh yes, the second pair of toe-up short socks are nearly up to the gussets. They are slow because they’re alternating with the Ophicleide Cardi which is partway down from the underarms now. The yoke is quite pretty in the navy noil silk: 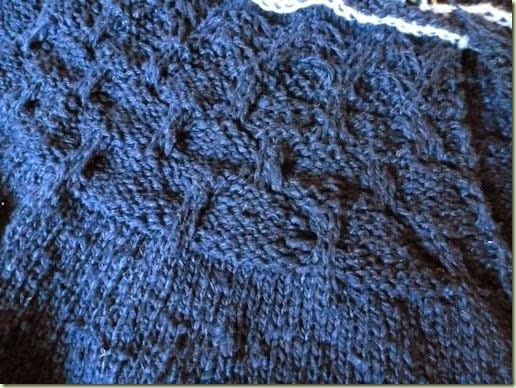 This is lighter than the true navy colour but otherwise you wouldn’t be able to see it! The white at the neckline is the provisional cast on. I’ll have to finish it with an i-cord edging at the end. So far it fits fine though I did do some increasing just before I split off for the sleeves to give more bust room. The body shape is swing so there should be plenty of room for the rest of me.

Anyhow I’m laying a bit low today to give myself a chance to recover from yesterday’s excitement. It’s been very hot and sunny here but I can’t complain that we’re actually having summer this year. Thom has been busy pressure-washing the deck in preparation for giving it a fresh coat of water-repellent stain. Gotta make hay while the sun shines, right? In my case I should be making bean pickles. I have a whole fridge full of them and more in the garden!

hope all goes well with this new warp!! taking a big risk but I understand the reasoning for not wanting to spend hours hanging out in emerg. if you don't need to although if you were going into shock hopefully they would see you immediately. stings in the area of face, neck and throat are the most serious. glad it all turned out ok.

Thanks for the kind thoughts, Jean! The sting area (about a 5" circle) is still red and itchy 2 days later. Sheesh! Hope it goes away soon.

Wasps stings are the worst! I used to be a beekeeper, and developed quite a sensitivity after being stung too many times. I was told that, like some allergies, this type of thing has a lifecycle of about 7 years. My reaction to stings now is in the "normal" range, but taking antihistimines and sitting quietly so the venom doesn't move through the body too quickly works for me.
Hope the itching is gone soon!