The Birds & The Beastie

Thanks so much for all the lovely welcome back comments! It’s a nice feeling to be missed. It tells me that you care. All together now…awwww…

And speaking of sweet things, we had a lovely Thanksgiving at bro-in-law’s with most of the family all together. The little cousins enjoyed playing down in the den while the adults yakked and ate their faces off upstairs. Such yummy turkey and So Many Deserts! Whew. And then we got to borrow the Littlest Grandbeastie overnight while her parents painted her new Big Girl room all day yesterday. Pink of course. She picked it out herself. You get to do things like that when you’re almost 4, right? One of the privileges of growing up.

While we had her yesterday we took her out to the Reifel Bird Sanctuary and met up with several other family members for a duck and chickadee feeding frenzy and then a picnic lunch in the warming hut. Dummy me forgot my camera! Bad blogger. You’ll have to imagine a little pink blur running back and forth grabbing seeds from our buckets and chucking them madly at all the birds. It was hilarious! The chickadees were eating out of our hands but she wouldn’t quite hold still so they were too wary to land. The bravest bird tried it but she flinched at the tickly claws and so lost her opportunity. Instead she put her oil sunflower seeds on top of a stump and they were happier to land there to get their lunch. Of course right after insisting that she didn’t need a nap, she fell asleep in the car on the way home. After turkey-partying until midnight the night before, we were all ready for a nap by then.

Oh and on the way in and out of Reifel we also saw the snow geese flying in and covering the fields on Westham Island. It was a really impressive sight to see them stop there on their migration. The fields really looked like they were covered in snow! Very cool. It had started to rain just as we were finishing our picnic so our timing was excellent all around. I’m still not used to the rain and cooler temperatures yet. We even – gasp! – had to wear coats for the first time in ages. And turn the heat up in the house. Now I know it’s really autumn.

Alrighty then. Back to the catch-up stuff. How about a tour of the fabrics I bought while I was away? 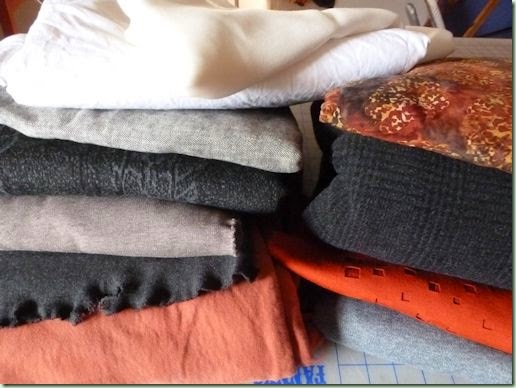 Not sure how much you can get from the photo but you can sure tell that I had a colour theme going on, can’t you? These have all been washed, even the wool, but not ironed therefore there are a few wrinkles in evidence. So, from the top of the heap:

And no, those top two fabrics are not going to stay white. You know I’m incapable of leaving anything pristine white without an irresistible temptation to throw it in a dyebath! The rest are all from the Mill End Store in Portland. Left pile:

You can see I have a definite wish to sew more for Thom (even though we’re going to be hunting for another fabric for his Finlayson Sweater). Right now his wardrobe is very short of long-sleeved shirts so I need to develop a good pattern for him which will have variation possibilities.

And here is the pretty Czech glass button that I bought at Diva Yarn & Trim in Port Townsend: 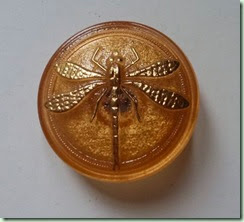 There’s a really interesting post here about the process used to make these buttons. Now I’ll have to make something to put it on, won’t I? Of course nothing is going to happen unless I get my rump up to my studio, is it?

Nice additions to your resource center. That's a really beautiful button. You'll have to make something really special to put it on. Somthing knitted?