In the last episode we left our brave Damselfly attempting to hold off The Claw from getting worse and prevent it from ruining her Solstice. Uh, nope. I fought The Claw and The Claw won. (Are you all groaning now? How many trite expressions can I come up with? Mwahh-ha-ha!!)

Yes, I finally broke down and went to Emergency on Saturday afternoon right after I wrote the last post. Things were getting ugly. And my timing was actually good because I ended up having to go four days in a row! At least it didn’t end up overlapping Christmas Day. Whew! But I’m getting ahead of myself. Back to the beginning.

Emergency in BC’s largest and busiest hospital is…an experience. You need vast reserves of time and fortitude. A patient patient. They will take good care of you but it happens at its own pace and you have to be prepared to wait until they can get to you. After all there are many others waiting too, some in much more serious states. They keep track – even if it seems kind of haphazard when you’re in the middle of it all. It’s nothing at all like the TV shows would have it. Thank goodness.

So we gathered all our patience and walked (in the pouring rain, of course) because parking is a PITA and we only live 2 km away. I’ll spare you all the minute details because that would be as boring as the waiting. Here’s the Coles Notes version. That first day, Saturday, The Claw was getting nasty so they took a pus sample (ewww), decided that I needed IV antibiotics (sigh), had trouble getting the IV catheter in my left hand (ouch, bruise), poked me again with a temporary one (double-ouch), gave me a Fast Track paper and told me to come back the next day for more fun and games. Which of course was Solstice at my son and daughter-in-law’s so I whined enough for them to schedule things early enough to hopefully get out in time for dinner.

Day 2 (Sunday) was an ultrasound to make sure there wasn’t any more lumber embedded (gooey), the stitches finally removed (HUGE ouch-ouch-ouch), a proper IV catheter in my right hand (much less ouch), IV antibiotics (again), and a line drawn around the reddened area to see whether it was responding properly. At least the stitches were finally gone and, although the nurses were grumpy about having to put the catheter in my ouchie hand, I still had one more-or-less functional hand left instead of both being incapacitated. Fun sleeping with the IV catheter in though. I spent Solstice with The Claw looking like a mummy or a small turkey roast: 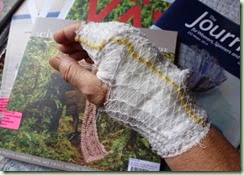 My darling son had to cut my dinner up for me into bite-sized pieces so I could eat it with my left hand! Had a delightful family time anyway, in spite of being semi-incapacitated.

Back to the hospital again for Day 3 (Monday) and this time just the relatively quick IV antibiotics. Things were already clearing up. Day 4 (Tuesday) and the last dose of IV antibiotics and the catheter out. The Claw is gone and, although not 100% yet, well on the way to health and function. Yippee!! I still have to take a week’s worth of oral antibiotics, the ones that I didn’t have a chance to take when they put me on the super-antibiotics. They won’t go to waste anyhow. I’m using soothing aloe gel and slathering Vitamin E and lavender oil on the scar to hopefully minimise it as much as possible.

Hint: the infection started to clear as soon as the stitches were out. They did NOT dissolve but festered instead. Mystery: solved. I knew they needed to come out properly a week ago and I should have insisted. My Dear Family Doc is not in my good books at the moment. Any snipping they did just made it harder in the end to remove the stitches completely. Lump of coal in your stocking, doc! We will not discuss how much time was wasted and pain suffered during this two-month-long Splinter Incident. It would just make me cry.

I’m still taking it easy on poor old Righty now that I have her back. It hasn’t even been 24 hours yet! Even though I’m chomping at the bit to get back to the studio I don’t want to push things. I’m still revelling in having a bare hand that doesn’t hurt. Gotta appreciate the small important things. I have the best Christmas present I could wish for this year! 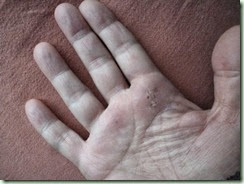 And the Scheffmas Tree is now sporting my two hospital wristbands as decorations. Hah!

Wishing you and yours all the very best of the Holiday Season! Now that I can type again, I’ll be back as soon as I have something new to say. Off to darling daughter’s tomorrow along with 25 or so of our closest relatives. Merry-Merry!!

Nevermind old boot, sounds like all will be well shortly. Did you say you had those stitches in for more than a week??? Good thing you headed for the hospital when you did. Have a Very Restful Holiday - watch those Jamie Oliver shows - they've been having a marathon on the Cooking Channel & they're really GOOD. Watch some old Black & White movies. Get well soonest.

Oh, I'm glad to hear you are finally feeling better. A hundred curses on your silly old doc, I guess they are only human but sometimes they don't admit it. Merry Christmas and much happy sewing, knitting, weaving spinning and other textile delights in the New Year!

Happy to have your hand back, just keep it out of dishwater, dyepots etc.

What an ordeal this has been! I'm glad your wound is finally healing up nicely. Good idea to not rush it on using your hand. Just be glad to have it free from stitches, bandages and infection!
Happy Christmas to you and yours!

Oh Damn, I forgot to prove I'm not a robot. I'll try again.
What an ordeal you've been through. Glad to hear your hand is healing nicely now. Good idea to take it easy for a while, and just revel in not having stitches, bandages or an infection. Be sure to get popping those probiotics once you're finished with the antibiotics.
Happy Christmas to you and yours!

Hi Louisa - what a tale - we heat with wood and get slivers all the time, continually poking them out with needles and now with your story will be MUCH more cautious and wear gloves handling the firewood! I love your cheery and entertaining blog...even through this wretched ordeal which is not to take lightly. If you have made it through Emerg without catching something else, congrats! Take care, Happy Solstice!

What a horror story! And I thought it was just the U.S. Health Care system. It must just be the nature of the beast. I do hope you respond well to all those antibiotics. It took me at least 9 months or so to get over what they did to my system after being hospitalized with pneumonia. Well, at least nothing hurt. So glad to see your hand looking good again. A very wonderful Christmas present indeed.

Thank you all, my dears, for your sweet comments! I actually chopped up an apple for breakfast today. Whoopee! Progress.

Andrea, I always wear gloves when handling firewood. Or gardening. Or lots of things. Who knew I'd need it for a simple assembly assistant job?

Pao, so far the antibiotics aren't giving me any trouble. I'm taking probiotics too which help a lot.