I apologise for having been AWOL for quite awhile now. My excuse is we ran away from home for a week! The forecast was for very mild and sunny weather and we had nothing important on the calendar so we dropped everything and hightailed it south in our little old VW Westie. Thom & I both had beaches on our mind and what’s better than having one’s wish fulfilled?

After suddenly deciding to go we packed up really quickly and made it down to Birch Bay in Washington State just below the Canada/US border for the evening of Day 1. Our first beach walk was along the slippery cobblestones of the bay that botanist Archibald Menzies named after the black birches when his ship, captained by good old George Vancouver, stopped there in 1792. We were happy to get an electric site as there was still a chilly bite in the wind.

Day 2 began in the fog as we travelled south to Olympia and then southwest to the very farthest tip of Washington at Cape Disappointment. Luckily it was a little warmer since for this one night we couldn’t get a power site because of the Presidents Day holiday. This day’s beach was Waikiki: 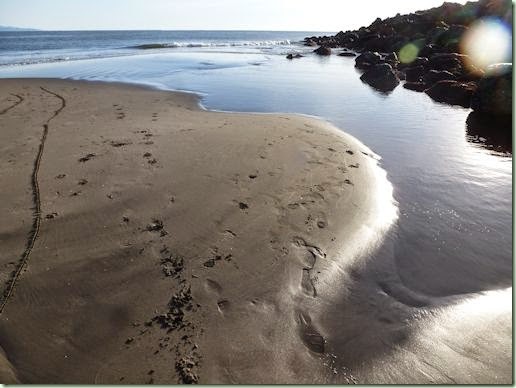 (Obviously not the one in Hawaii!) That’s the North Jetty on the right and we’re looking out the mouth of the Columbia River with a hint of Fort Stevens on the other side. From the beach we also saw a majestic pair of bald eagles near the Cape Disappointment lighthouse. Later we hiked up McKenzie Head and checked out the WWII bunker at the top. It had some interestingly rusty doors: 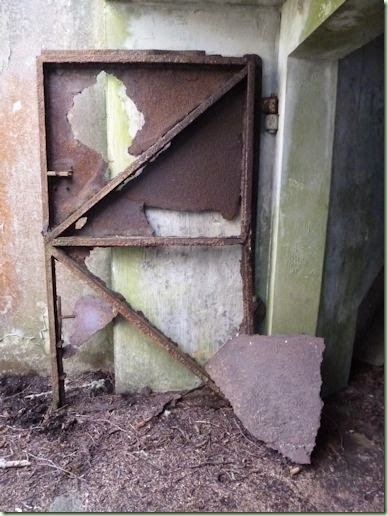 On Day 3 we crossed the Astoria Bridge and headed south to one of my favourite Oregon parks at Nehalem. The tide was way out revealing these salty channels between wee islets of sand: 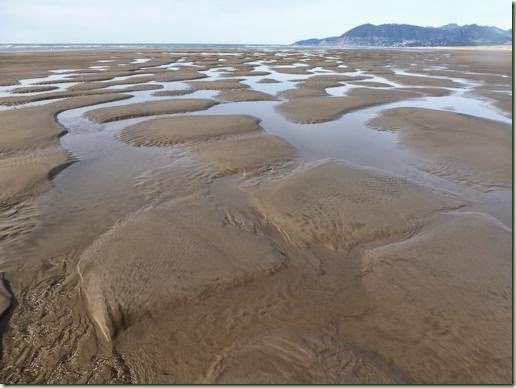 The weather was perfectly lovely and we were wandering the sands in our shirtsleeves. We even spied a “naturist” in the altogether taking circumspect advantage of the quiet beach! On Day 4 we walked around the paved bicycle trail on the Nehalem River side and later went to the beach again but north instead of south this time. I liked the pattern the crow’s feet made in the fine sand: 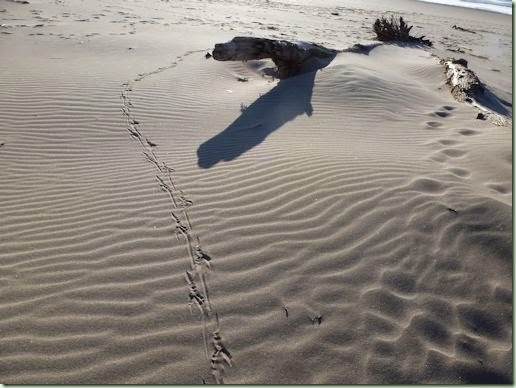 I especially liked hearing the waves at night lulling me to sleep. The weather was darker and a bit drizzly on Day 5 so we decided to head back north. But first we stopped at Oswald West for a walk. The park was named after a very wise early Oregon governor who decided to set aside the Oregon shore for recreation before the business interests bought it all up. (Thanks, Governor West!) We followed the Short Sand Creek down to the beach: 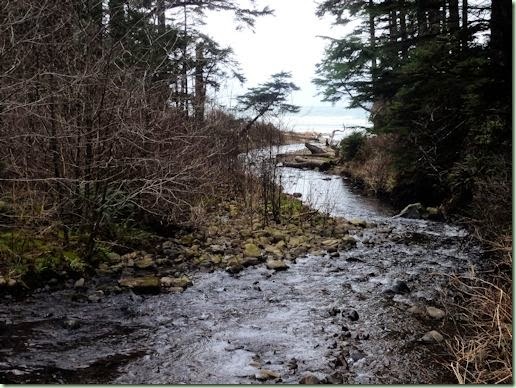 You can just see the waves at the end! They make Short Sands the most popular surfing beach in Oregon but we didn’t see any except one dude coming down the trail with his boogie board. Then we carried on over the bridge and back to Cape Disappointment where we got an electric site in the campground near Benson Beach on the ocean side of the park this time. The weather was still a bit iffy but cleared up enough for us to walk along the black sparkly sand: 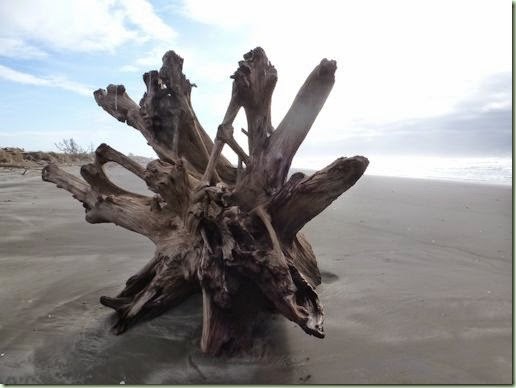 BTW, Cape Disappointment was named in 1788 by Captain John Meares who managed to miss the river entirely because he didn’t go quite far enough. There’s a lesson there, I think! LOL!! We still haven’t seen everything in this state park so I’m sure we’ll be back again.

Day 6 had us heading back up and across Washington, this time along our usual Hood Canal route to Dosewallips. The weather wasn’t cold but it rained on and off. We did manage the muddy trail out to the mouth of the river but not without umbrellas. Not much of a beach especially with the tide coming in but it counts, right? We didn’t see our feral goose of last September who thinks it’s one of the Canada geese but we did see a flock of the smaller black brants: 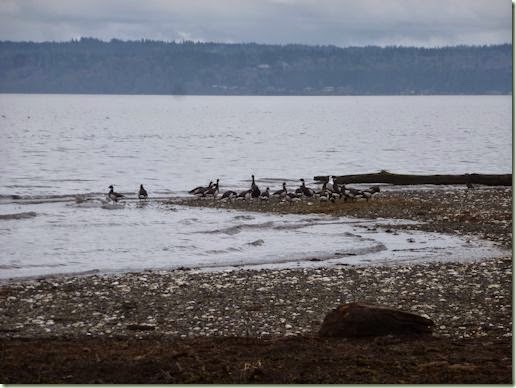 Well, on Day 7 we were going to go straight home but the weather was nice enough that we changed our minds. Instead we took the ferry over from Port Townsend to Whidbey Island and got an electric site at Fort Casey, in sight of the ferry slip: 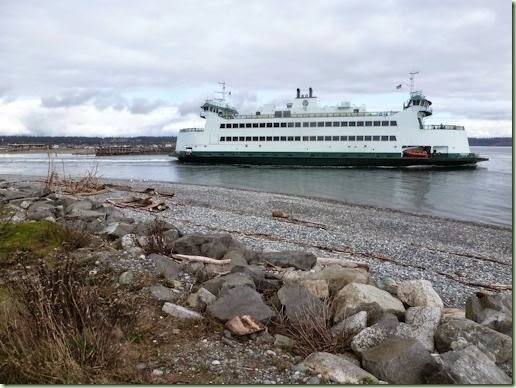 That’s the Kennewick heading out after bringing us over. Our beach walk was over those colourful glacier-rounded stones that I love so much. This time I was very good and left them all there. OK, I already have lots at home! Other people might want to enjoy them too, right?

Day 8 we finally decided to come home though again it was a near thing because the weather had gotten sunny again. However, we had run out of food and clean clothes and figured we would be pushing our luck to stay away any longer. It is February, after all! Though the alders and other deciduous shrubs were still pretty bare, it was amazing how far along all the plants are for mid-February. We saw cherries, camellias, flowering quince, daffodils and even a rhododendron or two in full bloom. We could also see views that are usually obscured by leaves which was interesting too. There still could be some cold weather coming yet but spring is very early this year.

Now that we’re back I’m starting to think about the garden and planting my usual seedlings under the basement lights. Thom has already started with the pruning and turning under the winter cover crop in the veggie garden. I’m somewhat behind with my clearing out there thanks to the Hand Incident but there’s lots of time to get caught up still. Meanwhile I’m still doing laundry! I have knitting to talk about too but that will wait until next post. At least now you know where I’ve been!

Sounds like a wonderful trip, seeing new things this time of year is most important. I am heading down to Whidbey for their annual Spin In the last week of March, green grass and flowers if I'm lucky.

Whidbey is such a special place. Hope you have a great time, Lynne. There's already green grass and flowers so I know they'll be there for you!

Oh, yay! I was worried one of you was ill - wouldn't you know it, you were just having fun!

Awww...so sweet of you to be concerned, Heather! But you needn't have worried. All is well in Damselfly's Pond.