Life Is A Spectrum

I’ve been pondering how my tastes have changed over the last few years. For instance, I used to love jewelry and beadwork and made a lot of pieces for myself especially earrings. But I haven’t worn any jewelry at all, even my wedding ring, in so long I don’t remember when was the last time. I stopped wearing my ring because I kept getting dermatitis under it but even earrings seem to irritate me. Perhaps they clash with my hearing aids? Anyhow, I’m just not interested in beady things any more. Will that change again in future? Dunno.

Then there’s the fact that my clothing colour tastes are becoming more and more subdued and earthy. Of course I used to wear a lot of black but it was set off with one or more quite bright pieces or accessories. Now I wear less black but more grays and browns as neutrals and the accessory colours are toned down. My home is still pretty colourful though! No boring beige anywhere there. I have no idea what that says about me.

Where I am much more colourful however is in my cooking. I love bright vegetables! That’s why I buy rainbow carrots and orange peppers and grow yellow zucchini, purple kale, red cabbage and bronze lettuce. Too fun. I like to think they taste better too but that could just be enthusiastic imagination. Whatever. The good thing is that I’m eating veggies that I used to not even like, such as chard. All the better when the stems are pretty colours, no?

So my tastes in many things are shifting and simplifying. Perhaps it’s an age thing? I no longer want every craft book and magazine or covet every skein of yarn and bolt of fabric. I can choose my purchases more wisely. OK, I have to choose my purchases more wisely because we no longer have any money to waste! But I don’t feel like I need as much stuff anymore and I can let more things go. I already have most everything that makes me happy anyhow.

Perversely, I’m also knitting yet another scarf (which I don’t really need) that I mentioned in a previous post. This is the Colour Change Scarf, free pattern by Purl Bee and it’s quite colourful indeed! I’m using JST Jagger superfine merino in 5 sunny shades. I blocked the wee bit I’ve already knit on the needles just to make sure I liked the results: 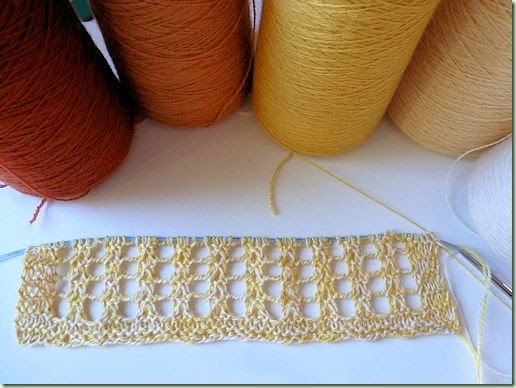 I sure couldn’t tell by the shrivelled little blob it was before pinning it out! The yellow is the constant colour and the other shades take a turn in ever-increasing lengths through the scarf from lightest to darkest. Because my yarn is thicker than the recommended Habu, I reduced the stitch count to 52 and the needle down one size for a nicer hand. (It was too “thready” for my taste.) I think it’ll be nice and soft and warm. Not that we need warm scarves around here for another 6 months! It might take me that long to knit though because this is not something I can do by feel alone and I have to watch every stitch.

I’ve also finished spinning and plying the second Alpaca Tweed skein. 488 more yards of deliciousness! Only one more skein to go before I have a sweater’s worth. OK, quit laughing at me, everyone! You’ve been watching my current sweater knitting binge, haven’t you? I did say I had almost everything I need, didn’t I? I don’t have enough sweaters yet. So there.

One last item – in a comment on yesterday’s post Jean asked what I’m putting in the dye garden. Already there are rhubarb, madder, dyer’s chamomile, 2 kinds of perennial coreopsis and a woad that I’m allowing to go to seed. In the greenhouse waiting until it’s warm enough are Japanese indigo, annual coreopsis and marigolds. Still in the house under lights are a couple of weld plants. At the last minute I thought I’d put them in to mature and overwinter for next year because I need fresh seeds even though I already have enough dried weld to dye with for several years to come! I’m also not putting any new woad plants this year but will just rely on the Japanese indigo instead. I only have just so much space and I’m already reaching out onto city property! 30 indigo plants will fill it up for sure. Photos to come later when things get going.

Now it’s time for me to get going too!

Plant all the perennial dye plants on City property, there needs to be more variation in the neighborhood!

As with you, I find I don't wear much jewelry anymore. I used to love huge rings - I have some very large ones with emerald cut semi precious stones that I love. All the big, bright buttons are in the box & I gave the diamonds away. I tend to wear only a slender little ring off & on & one pair of earrings. Maybe it's due to the new eczema behind my ears & on the backs of my hands, sigh. Is this a sign of old age???
I do intend to continue wearing the bright fuchsia, raspberry & purple tops in my closet until I die. Fah to dull browns, greys & blacks!!!!

Will you tell us or, even better, show us what colours these plants produce. I did a bit of natural dyeing many years ago but didn't know that rhubarb could be used as a dye material. Your garden sounds wonderful.
Vancouver Barbara

Sharon, you go ahead and be as bright as you are! I celebrate choice.

Barbara, that's a great subject for a blog post! I've done a lecture about what you can grow and dye with so I can use those notes. It'll take a bit of work but I'll get on it.

Great post! And I think changing as we age is much more interesting than those who try and cling to their youth. My next-door neighbour told me the other day that she has lost so much weight she can fit into clothes she wore in the 60's. She still has dresses in her closet from fifty years ago! Vintage value aside, how crazy is that?

Thanks, Heather. Glad something resonated with you. I have saved some vintage garments myself - none so old as the '60's though. More like the '90's and one or two items from the '80's. I would have to lose about a third of me to fit in anything I wore in the '60's! Back then as a skinny teenager I was only about 98lbs soaking wet.