That’s the sound of time flying by. Wow! It’s been awhile, hasn’t it? So, did everyone who celebrates have a lovely Easter holiday? Our family wasn’t planning anything but at the very last minute we ended up with two dinners to attend. Different days and a different selection of family members. It was fun! Sometimes it just pays to wait until somebody else does it first. ;)

The iffy weather we’d been having cleared up and we finally got a good opportunity to get dug into the garden. Of course Thom has been pruning everything in sight for a couple of months now. But this was the first chance I’ve had to get out there and do my thing. Thom does a lot of the heavier work but I’m the one who does the fiddly planting, transplanting, weeding, bed shaping and the all-important part of figuring out where everything goes. We make a great team and we both really enjoy the work. I’m a bit stiff today though! And there’s lots more to do out there. How do you eat an elephant? One bite at a time. Not that I’d want to eat an elephant. (Poor darling.) I’d rather eat the asparagus spears along with kale buds, spring onions, chives, parsley and lamb’s lettuce that I’ve been harvesting.

Meanwhile in more fibreish news, I’ve been knitting madly on my Sweet Ginger Candelia. It’s a lot bigger than this now: 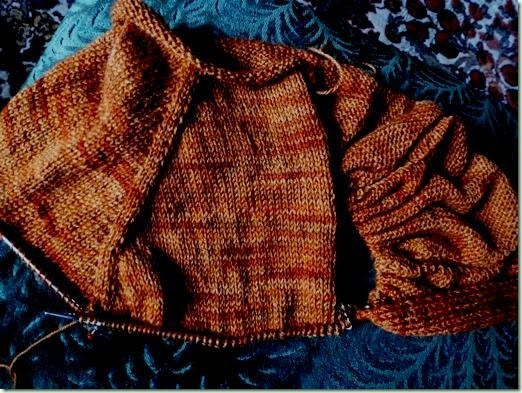 Down nearly to the waist in fact. Why is this sweater going so much faster than the black one did? It’s exactly the same gauge! One of life’s mysteries, I think.

Also I’ve been spinning away on the alpaca tweed: 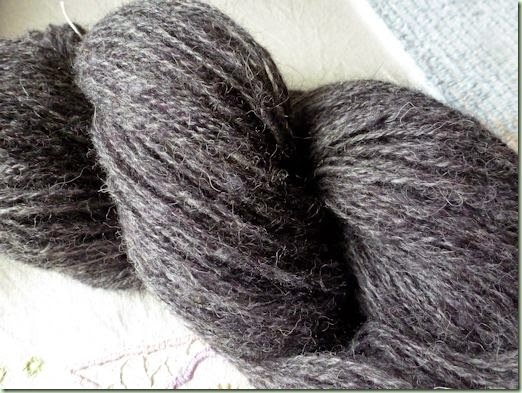 I think you can see in this photo of the first full skein that the actual colour of this stuff is a steel blue. NOT a natural alpaca colour at all! The gray alpaca was most definitely blended with dyed fibres which I think is what gave it that alluring bluish tinge that drew me to this roving in the first place. It’s only in full sunlight that you can actually see it clearly, along with the tweedy bits of rose, blue, gray and dark gray, and even one lone yellow blip! Very interesting. But not exactly what I was told I was buying. 100% alpaca it isn’t.

However, I’m making the best of it and although the yarn seems to shed some (what’s with that?) it’s soft and airy and I think it will make a nice sweater. I’m partway through spinning the second skein. These are honkin’ big beasts! The first one is nearly 5 ounces of sport weight two-ply. I spun the singles on my Louet Victoria and plied two of them on my Louet S-90 with its bigger bobbin. And I only need 2 more of these mega-skeins for a long-sleeved sweater. Spinning right along. I’ll probably be ready to begin knitting about the time I’ve finished the Candelia.

Of course now that I’m committed to getting the garden going I finally found my “sewjo” and have a huge desire to sew some new clothes. Which isn’t going to happen for at least another week. Sigh. But that’s OK. Everything has a season and currently spring is here bigtime! I’ve got tomatoes to transplant into bigger pots. Must get to it.

Nice fiber work going on here. And gardening - well, I envy your long growing season. My flower beds are still buried in snow, even after several days of warm weather. In time, I'll be able to get out there!

Oh sorry, Dixie! I hope your snow goes away very soon and spring springs up for you.

Well, our frost-free season may be long but it's not all that warm most of the time in our maritime climate. Things grow slowly so there's no real advantage for the plants. They just take twice as long to mature!

- well, at least the dandelions are enjoying the weather and the lawn needs mowing every other day (it doesn't get it). Wish "taking twice as long to mature" applied to humans as well!