The next chapter of the Tale of Last Week involved getting home from Manning Park on Friday just in time to unpack in the rain, pick the beans and squash (luckily the rain mostly quit by then), put a few things away, have a shower, get dressed in my nice clothes (black Mizono Dress, Little Black Cardi, Speedy Gonzales Shawlette, handknit Tulip Socks and my sensible red Blundstone boots) and toddled off on the Canada Line for downtown. Whew! I’m tired just typing all that…

I was headed for the 40+ Blogger Meetup to have dinner with about 25 people none of whom I had ever met in real life before. Yikes! Several of them were familiar from reading their blogs and some actually read mine so I can’t say we were all total strangers. But nearly. And guess what? It was really fun and I wasn’t at all intimidated – which absolutely amazed me! Everyone was really nice, compliments flew everywhere, many photos taken, conversations were crossing over each other and new friends were made. It went like this: 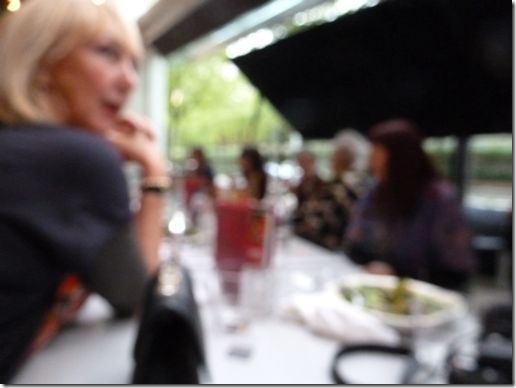 Yep, all a big blur. I think I even had a cider and ate a salad? And then the majority headed for a speakeasy (Prohibition, underneath the Hotel Georgia) for more laughing, schmoozing, imbibing and even some dancing. One single $20 glass of wine later (whatever happened to 1920’s prices?) I was falling asleep so toddled on home. Luckily we were only a block away from the Canada Line Station at that point. We won’t mention the long blocks home at the other end. Nope.

Ooh, I forgot to show you the lovely schwag that darling Melanie (Bag and a Beret) presented to each participant: 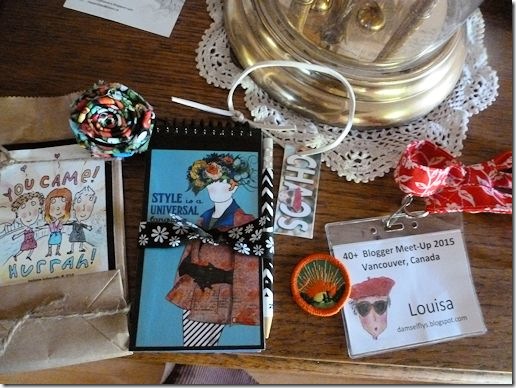 It was so helpful to have the name tags and everyone embellished themselves with the rose pins. The Girl Scout badge was a gift from dear Pat (pao of Project Minima) and I discovered through my awesome google skillz that it means “energy saver”. Yay! Very me. (If anyone else wants to attempt to identify a badge, beyond sweet Liberty of Maiwa’s helpful hints, I found mine here.)

On Saturday morning it was back into the fray as we met up at Granville Island for tours, more schmoozing and food: 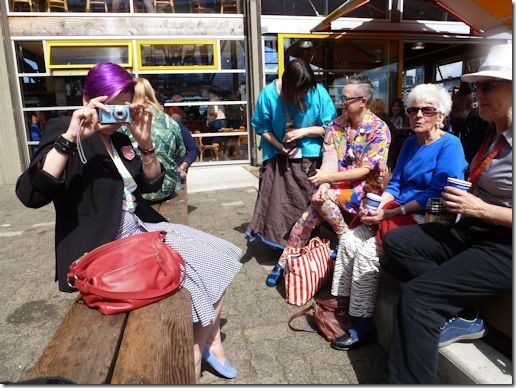 Photographing the photographers! I ended up leading a little group – just Pat and Anne (the delightful Spygirl) and myself. I dragged them hither and yon, poor things! To Diana Sanderson’s Silk Weaving Studio, the Cloth Shop, both Maiwa in the Netloft and Maiwa Supply, Circle Craft and I forget what else. Then they wanted to go downtown to Dressew and Button Button rather than follow the rest of the group up Granville Street to Anthropologie and Meinhardts.

I have to admit I felt like I was dragging poor Anne and Pat along behind me! They were not used to walking as far as I am (and I had already walked the 4 km to Granville Island before we even started). Oops. Sorry, my darlings! Really! But we did have fun despite the sore feet, didn’t we? At least we got to sit down at the bus stop and in the bus downtown. After some food and drink at the Purebread bakery on Hastings they were more ready to check out the delights of Dressew. Of course I bought fabric! And they didn’t. Obviously it’s been too long since I’ve been there. Heh. Pat did buy 2 zippers though. Dressew has great zippers. 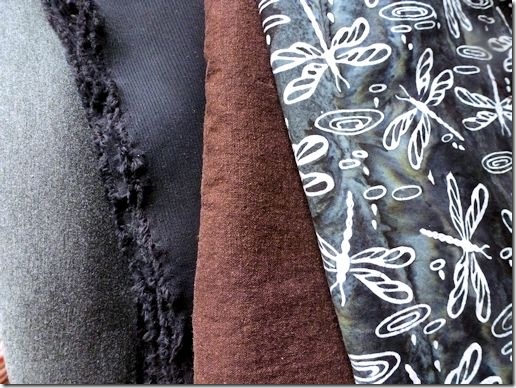 The damselfly quilt fabric I bought at Granville Island at the Cloth Shop. There were less than 2 metres on the bolt but I bought the whole thing hoping to make another Katherine Tilton vest B5891 like my Indigo Batik Vest. I’m not quite sure what else I’m going to combine this with since there’s not enough of it to cut all the bajillion pieces. Either the green cotton left from my LaPine Dress (which incidentally got its inaugural run on this day) or the leftovers from the French Housedress or ? TBD as they say.

Next to that is some more linen/rayon/lycra in a deep chocolate brown (somewhat darker than it appears in the photo). I think I’ll make another Mizono dress only maybe with sleeves this time. Then some really cheap nylon/lycra rib (labelled as “supplex” but who knows?) from the bargain section at only $2 per metre. That will be a couple of pairs of leggings and a sleeveless top B5954 View A. The selvedges are fabulously fuzzy after washing and drying (yes, I’ve done that already) so I just might use them to finish off the armholes and neckline. Lastly is some grey marl bamboo/lycra that will become a Katherine Tilton B5925 View A t-shirt and possibly another more plain t-shirt. Obviously I have every piece spoken for already.

Lest you think I went overboard, I left an awful lot of fabrics still in the store. Just sayin’. I’ve been prepping the patterns ready to cut out a bunch of garments to sew very soon. My big challenge is the Battle of the Leggings or “Marcy Tilton vs Kwik-Sew”. I want a basic leggings pattern with no outer leg seam and since these ones are in the pattern stash, I’m going to test them out: It’ll be fun. More on this as progress is made.

And we never made it to Button Button at all, sadly. I truly hope that Pat and Anne survived the trip back to their hotel. I’m a little worried since I haven’t heard from them since? Hope they aren’t lost in the wilds of downtown Vancouver. Let me know you got home safe, will you? Love, Damselfly.

So I think the Blogger Meetup was a big success! Folks came from all over to attend. We’re talking places as far flung as LA, Chicago, Florida, London (UK), Holland, Toronto, Victoria and New York! Wow. I didn’t take part in all the events but I had a great time nonetheless. Biggest warm thanks to our hosts: Suzanne Carillo, Melanie Kobayashi and Sue (A Colourful Canvas) for all your work organising this epic blogger meetup. I’m sure my hometown never knew what hit them! I sure don’t.

omg, I just woke up after a 24 hour nap to see your delightful meet-up madness post, Louisa. I'm still exhausted. You and tour guiding ability was a bright highlight of the trip. Dressew was fab and I'd forgotten we missed Button, Button. Dang. Well, Anne and I had gotten o.l.d. by that time anyway. I missed the chance to come to your place too which I really wanted to do. Your Tilton dress was so cool. I wonder what happened to mine?... What a thrill to have met you in real time. xxoo Pao

So glad you survived, pao! After seeing Sheila's photos this morning I knew you all had a whole lot more fun on Sunday. I'm sorry you didn't get to visit my place but stuff happens, eh? Maybe there will be another opportunity some day. Hope your True Love had fun on the bike! Hugs!!!

I'm very happy you came Louisa! And although I didn't get much of a chance to talk to you your wonderful presence, energy and exuberance was well remarked.

Mel, Sue and myself are delighted that so many showed up and enjoyed our handmade goodie bags.

Such an awesome recap and all I can think of is Purebread's Hummingbird cake, LOL! You were the consummate hostess, sharing my favourite bakery with the troupe!

I enjoyed our lively chit chat on Friday evening Louisa! Perhaps another visit in the future? I'm always up for Purebread and Dressew!

Oh, thank YOU, Suzanne and Sue! It was great fun. Exuberant, yep that's me alright, Suzanne! I'm sorry too we didn't get more of a chance to chat - this time. And yes, Sue, we should definitely get together sometime for cake and Dressew. I'm totally up for it! (Especially after I sew up some of the fabric I bought already.)

Too much fun!! Yes, yes, and yes to all the comments, especially what Suzanne wrote "wonderful presence, energy and exuberance." I wish I had more of a chance to talk with you but I didn't even know where I was half the time myself. You are so close by. If you and Sue want a third wheel for that sweets and fabric outing, you can definitely count on me. I'm so glad you came!

Oh, I forgot to mention the schwag bag - it was a group effort. Suzanne put the whole thing together. She did the custom notebooks/pencil and fabric flower and she printed the card designs I drew. Sue sewed the lanyards and made the name tags. And I whined a lot and made the human luggage tags. Heh.

Big thanks for clarifying things, Melanie! Lovely job all! I only found out the details of the schwag after I wrote this post but you'll notice I only said you presented it. Covering my... ahem. ;)

And definitely we'll include you in our Purebread/Dressew escapade! And anyone else who wants to join in. The more the merrier!

Lovely chatting with you over dinner at Boston Pizza, Louisa! So nice to meet you! Glad you had fun at Granville Island - I liked that that part of the meet-up was unstructured so that different people could hang out!

It was lovely meeting you too, Sheila! I could use you around to "shuszz" me (or however one might spell that word) every five minutes. My clothes are always in disarray and a personal dresser would be handy! And I definitely need your posing tips too. Heh.

I love the way everybody met and mingled and gradually formed groups with similar interests. So fun!