I think my bendy-over is broken! Since the weather has been nice I've been plugging away in the veggie garden trying to clean up some of the dead stuff left over the winter. It doesn't really look like much still: 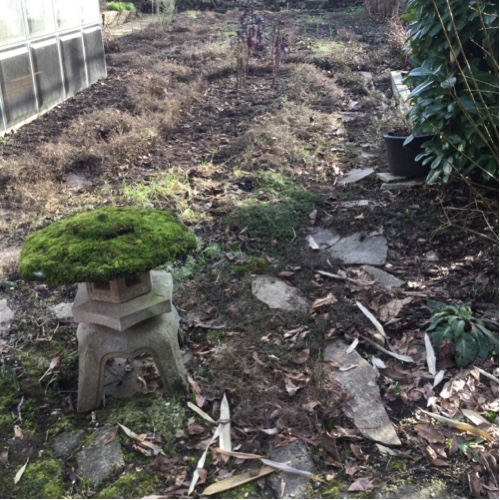 And sadly I think that my recumbent rosemary (in that big pot on the centre-right) is toast after all. I'll leave it in for now and see if anything greens up. Sigh. My fault for not putting it in the greenhouse out of the snow and ice. Doh. At least the larger and hardier Arp variety is fine. I'm not quite finished the cleanup yet but I ran out of bendy-over ability. Two days in a row was a little much at the beginning of the gardening season. It takes time to build up the stamina!

The snowdrops are out in force: 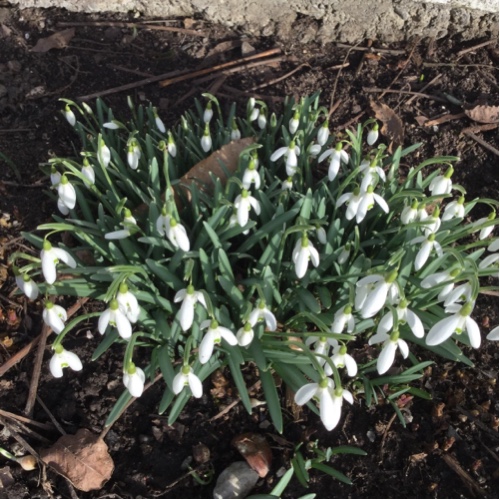 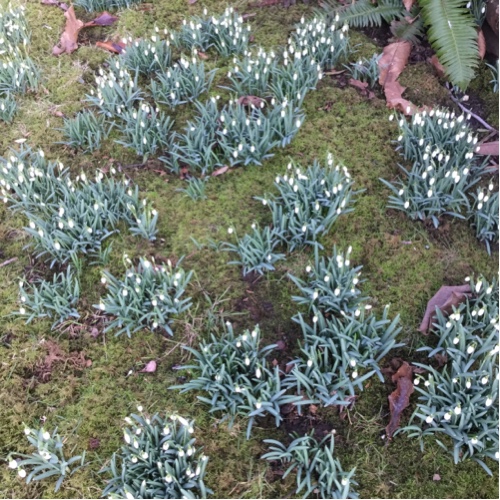 The ones in the shade of the garage had already closed up for the evening. I've even seen the occasional crocus and early daffodil but not in my yard yet.

In crafty news, I've spun a 6th skein of yarn for the Licorice tunic and now that I've joined the pockets on to the front piece I'm nearly ready to use it. I may need a half-skein more before I can finish this sweater but I'm holding off to see how far the last ball will take me first. I want to just spin enough so I don't have a lot of leftovers. The rest of the wool can be spun finer for a different project. Bulky yarn is not something I prefer to knit with a lot, mostly because I don't get much wear out of a heavy sweater in our climate. Lightweight sweaters are much more useful and don't really take that much more spinning depending on the style. This bulky 3-ply could have been over 1200 yards of 2-ply fingering for the same amount of effort. Plus it's actually easier for me to spin finer than it is to spin thicker. You'll see when I spin up the snow-dyed Corriedale which I want to be a fine 2-ply (at least fingering if not finer still) for a shawl. Actual size really depends on how it wants to spin up.

Now that I've gotten started on so many knitting projects (4 at last count) I'm almost ready to get back in the sewing groove. I have a pile of mending and ironing that I've been ignoring! And several sewing projects are calling to me. Must be spring fever, no?

I must plant snowdrops!

Hello, Joyce! Snowdrops are apparently hard to get started but once they get going they're hard to discourage. Ours came with the house when we moved in nearly 40 years ago. They get mowed along with the grass after they are done blooming. And they don't seem to care! Good luck if you decide to plant some!

ooh, take it easy starting in the garden. It is still cold and damp,a bad combination for wintering backs. That's my excuse anyway!