Geesh, how did another month show up again so quickly? I know April is short by a day but here we are. "Summer is a-comin' in and Winter's gone away!" We can only hope. The weather has been up to its usual flakiness, one day of warm-ish sunshine and the next day raining. We're starting to eat from the garden now anyway. I've picked a bucket or two of my greens & reds: 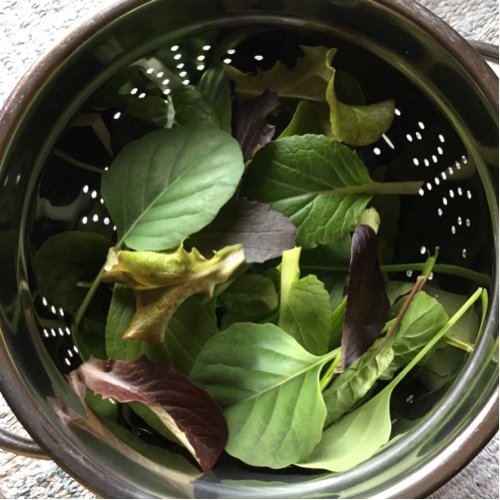 Just taking one leaf from each plant as they grow. We've also had asparagus omelettes with snipped chives and ate all of the first batch of rhubarb sauce on our cereal. Delish! More to come.

Meanwhile I finally finished the After The Melting Socks for Thom. When I dyed the yarn in the sludge leftover from the snow dye I obviously didn't rinse it enough. It left crazy orange stains on my hands which were hard to get off especially my fingernails which are still faintly orange. I ended up rinsing the finished socks in hot water and Synthrapol, which is great at removing unfixed dye, and then rinsing several more times in plain water. Finally the last rinse was clear so hopefully there will be no more crocking off on anything. Though Thom's toes would look cute with orange nails! Or maybe not... 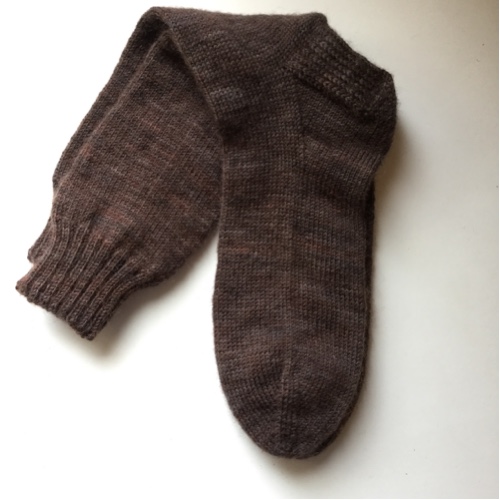 The socks ended up slightly lighter in colour than they were but not by much. Can you tell the difference from the leftover yarn as compared to the finished socks? 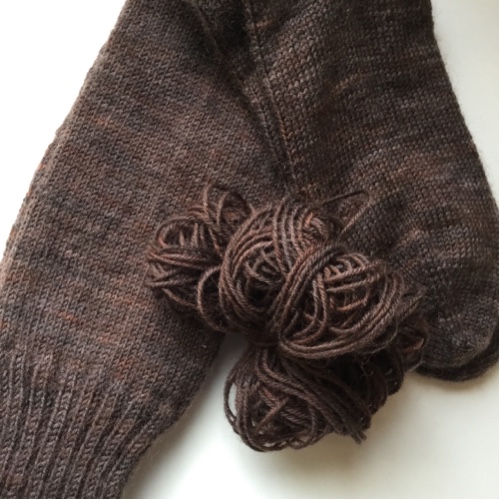 Anyway, now that I've finished something I'm resisting casting on for something else right away. I still have 2 projects on the needles, first the Sunny James Pullover: 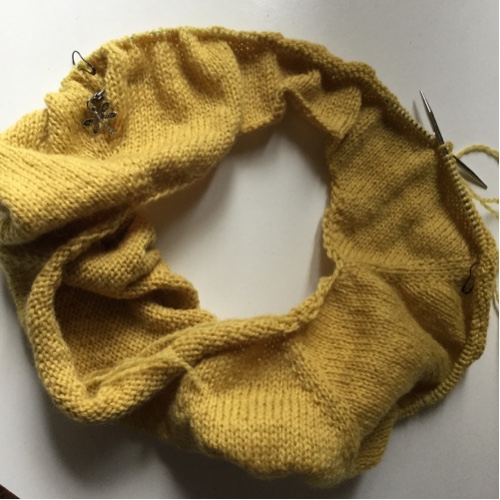 This sweater hasn't grown more than a couple of inches in the last while but now it has become my TV knitting so there's hope for it to go much faster. I still glow in this gorgeous rhubarb root yellow. And there's also the Spring Thaw Shawl: 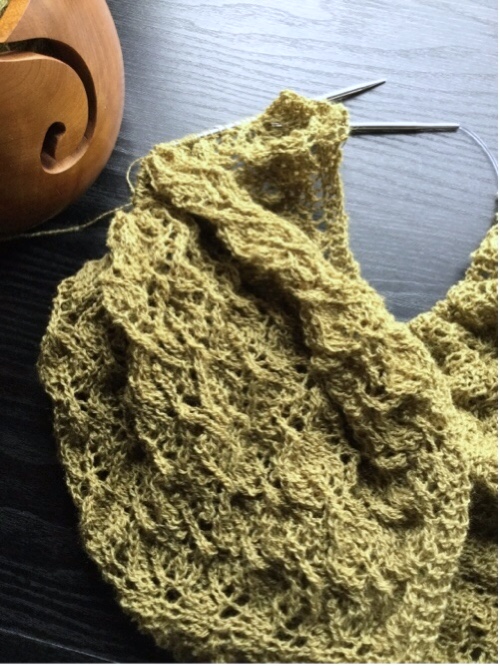 This is Zephyr wool/silk yarn dyed in marigolds and coreopsis with an iron modifier to give a soft olive green. I'm concentrating on this project now that I'm cruising down the final edging to the finish. I need to follow the chart carefully while I'm knitting so it's not very conducive to doing other things at the same time. I've been semi-watching a few video podcasts but I'd finish even faster if I'd just knit! Yeah, right.

What else? The Coopworth spinning doesn't look like it's gotten much further: 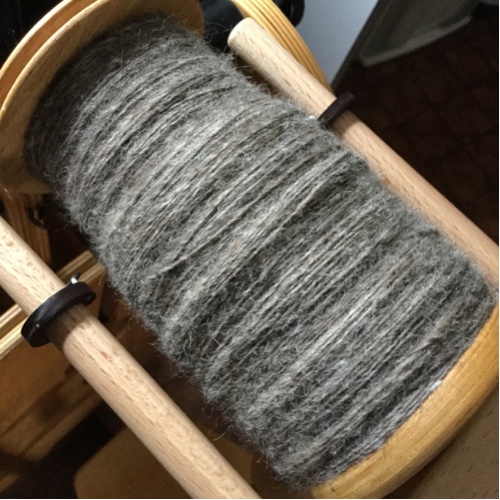 However it represents about 4 more hours work since the last post. I still haven't even finished filling one bobbin yet. Sigh. Though to be fair these are large bobbins.

Did I mention that the cold I picked up after Easter hasn't quite gone away and of course Thom managed to catch it as well, although it took him nearly a week after I got sick. With two snifflers I've been washing a lot of handkerchiefs! We've been using hankies instead of disposable tissues for quite a few years now and I've found that they are much nicer on my nose and upper lip. A lot less lint too and they never get lost in a pocket and fuzz up the laundry. Several of my friends are not convinced that hankies are sanitary but I don't worry overmuch and just throw them in the laundry with the rest of the wash. I think there's too much emphasis these days on eliminating germs by those who want to sell you something "antibacterial" and/or disposable. I paid about a dollar apiece for my 2 dozen squares of cotton that last about 8 years of regular use. They only get softer and if they get stained I throw them in a dyebath to disguise it. I even used a bunch of them to practice my shibori stitching and they are fun to use. Each one has character. Match that, Kleenex!

OK, moving right along. What's next? A dive into the sewing queue! I haven't touched my sewing machine for ages and I'm desperately needing some new duds. Of course I keep saying this and instead I keep knitting. But I'm getting serious now.

Knitting, sewing...makers gonna make! Your sewing machine will be there for you when you're ready.

I'm impressed that you are already gathering from the garden. It takes thought to be sowing seeds at the correct times...and with this crazy weather! I hope you haven't had any losses due to snow and cold. And thanks for the reminder...I must go check my rhubarb! :)

I'm not big on orange feet and I don't imagine Tom would be either. ;) Hopefully those gorgeous socks are set!

The names of your projects are delightful. Pfft with the sewing if your knitting has grabbed your heart at the moment. I imagine Thom won't mind the orange toes much since he gets to wear such fabulous socks. It's not quite barefoot weather yet anyway. I can't believe you have greens in the garden too. I keep forgetting that nature finds a way despite everything.

Thom is wearing his new socks today so we'll know for sure whether or not he turns orange. Though he says he doesn't care because nobody but me ever sees his bare feet unless it's 93-jillion degrees outside. Heh!

Thank you for your invaluable support, my dears! I really do plan to sew something soon though. I need clothes especially if it's going to start warming up somewhat. Still knitting anyhow...