Helloooo!! Just attempting to see if the (finally) updated Blogo app, my blog editor of choice, is going to solve the crashing issue that it’s been suffering from since the iOS 11 update. It wouldn’t let me put photos in my posts. Humph. 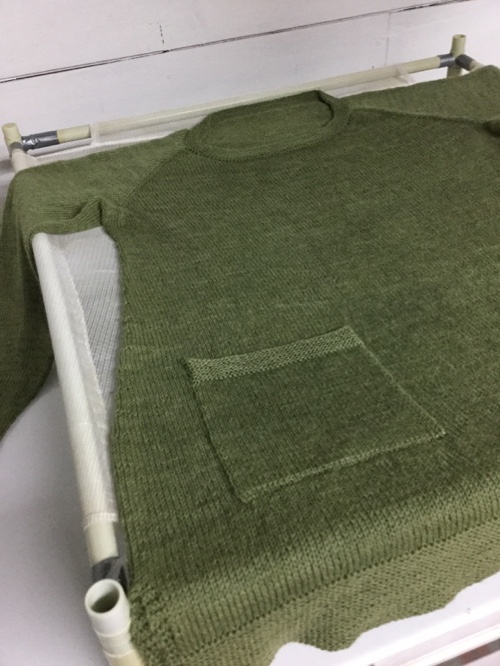 Yay!!! I’m back in business! As I’ve said before (and I’ll say it again) I despise Blogger’s online editor with a holy passion. Though at least it was sort-of useable until Blogo was fixed. Now I need to get over to to the Blogo folks and thank them profusely for fixing it. Don’t worry, I will draw the line at kissing their feet. But it’ll be a near thing.

Meanwhile, that’s a teaser photo of my Seagreen Seamus Tunic that I just finished. Yes, of course I know it’s pronounced “SHAY-muss” (and means James in Irish). But I liked the “sea” alliteration. Or whatever it’s called when you only type it! I was in Haida Gwaii when I started knitting it so the sea was definitely on my mind. I’ll give you a better view when it finally dries in, oh, maybe several days from now? The socks I just washed took 2 days and they were hanging up so the air could circulate. It’s been a bit damp around here.

It certainly took long enough to finish this big sweater and the Combers one which I actually started first is still on the needles. I’m cruising down the body towards the hem of that dress but I still need to figure out the pockets. That’s not something I can do while chatting or watching the tube! It’ll be an interesting experiment. There may be frogging involved. We shall see. 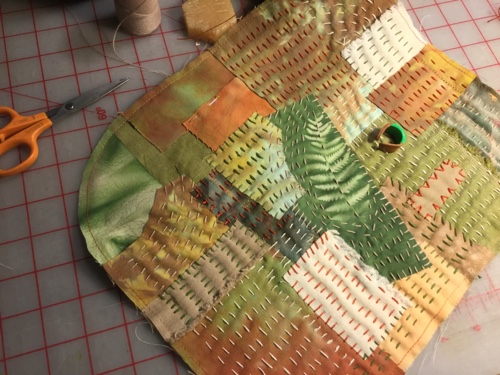 Off to finish the last corner of this side of my Boro-Stitched Tea Cosy. You’ll see more of this project soon too. So glad Blogo is working again! {clapping with glee}

tunic looks great, love the colour. Happy for you that Blogo is working, there is nothing more frustrating than an uncooperative computer.

Glad to see you up & running again!!! Can't wait to see the tunic ON!! And I know what you're saying about Blogger. For some reason, known only to it, my font got really, really small. Couldn't fix it. Next post, back to almost normal. I have no idea. Anyway, like the tea cozy. Everyone needs a couple in this weather unless you have a nice wood stove where you can keep the pot on a trivet, next to the soup pot . . . boy, do I miss the old wood stove!!

Yes, that sweater is gorgeous. Color, texture, shape. Would love to see it on you.