Well it was! Gone for almost a whole 24 hours! I thought it was MIA but it really went AWOL instead. Backing up, we went to the family New Year’s Day lasagna-fest at my MIL’s and of course all the coats, hats, purses, bags etc. ended up on her bed. She has a little house and it was filled with yakking family members (including the new baby!) so you can guess that it got rather warm in there. Even too warm for MIL who usually likes it tropical. So after all had a chance to admire the Swallowtail Shawl, it got relegated to the coat pile. I rolled it up and tucked it inside my fleece jacket so it wouldn’t go wandering. Long story short — we get halfway home and I suddenly miss my shawl! Got home and called the MIL and she couldn’t see it anywhere. Not under the bed or anywhere else. Check my pockets and my bag. Nope. Check ’em again. Still nope. Where on earth could it have gone? I was heartbroken. I’d only had it on for a couple of hours since it came off the blocking pins! Nobody called the next day to say it was attached to their clothing or fell into their purse or diaper bag. I was starting to accuse family members of purloining it (not to their faces of course!) and still it didn’t turn up. Later yesterday afternoon, T-Man started to call his relatives to check and, although his 90-year-old aunt said that if she’d seen it she would have taken it because she liked it (!), it was still missing. So I decided to have yet another hunt through my coat. It’s gotta be somewhere, right? I finally found it but left it in situ and took the coat to T who looked. And looked some more. And finally found it. Even though I had indicated it was there, he still took awhile to find it, tucked way down in my sleeve wadded into a little clingy lump that I hadn’t even felt! Sheesh. Now how do I punish that wayward shawl? By not wearing it for a week? Two weeks? BAD shawl! 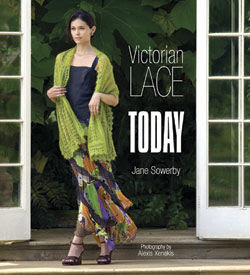 Now that I’ve got that out of my system (amazing how much stress temporarily losing the darn thing produced), I promised to tell about the new book that I got with my Christmas gift card from Darling Daughter and her Sweetie. I’ve mentioned this before in a previous post: Victorian Lace Today by Jane Sowerby. It’s a really impressive book: coffee-table-sized, hardcover, lots of eye-candy photos from Alexis Xenakis of Ye Olde English buildings, manor houses, gardens and bric-a-brac. However, the content is more than just pretty pictures thanks to Jane! She became obsessed with the evolution of Victorian lace knitting and has been obsessively studying the pattern books of the day in order to extract the lace from them. According to her it was hard slogging through the overblown language and lack of abbreviations or charts or often even illustrations to find out how the lace was actually knitted. Some patterns were riddled with errors and inaccuracies which she tried to resolve by charting and swatching and in some cases concluding that some were actually not knittable as given. Jane also recounts the histories of the strong Victorian women who published these books and it all makes for fascinating reading.

Many of the patterns could be attempted by fairly beginner level knitters and really none of the patterns are extremely difficult. They are very tempting! Toward the end of the book, there’s a helpful chapter on how the shawls and scarves are designed and assembled and ways to change or re-assemble portions to create your own versions. It’s in no way as detailed as in some other lace knitting books but the information is complementary and illustrated with lots of examples. Another section I enjoyed was a list of the yarns grouped into sizes, including a number of other alternatives not used in the book that you might like to try. There were even a number of shawls made from lovely fine handspun yarns, I assume spun by Jane Sowerby herself. All the shawl and scarf patterns include the yardage used (hopefully reasonably accurate), which is something I complained that was missing in my comments on the Swallowtail Shawl. This will make it easy to substitute handspun for any of the patterns.

There is a 2-page errata sheet for this book here. Seems like no pattern book can escape mistakes, no matter how diligent the proofers! Besides the obvious ones, it usually takes a number of knitters trying to figure out how to follow the patterns to find the errors in them. I routinely check on the publisher’s website and in the blogs before starting a project from a book or magazine. You don’t want to be in the middle of something and find that there’s some glaring error you weren’t aware of staring at you.

I am glad your shawl was found, I could feel the tension all the way to my house. I am behing on my blogging, your grandson is beautiful. He looks good and healthy. I was transported back to Utah when I saw your stole, it is stunning.