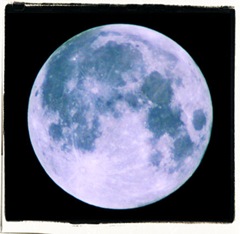 Hope you get to see the blue moon tonight! I doubt the sky will be clear here so I’m going to have to just imagine it. I did get to see the first one on December 2 though and it was glorious. Of course, the moon isn’t really blue – or made of cheese either (as Wallace & Gromit discovered!) That’s just the common term for the second full moon in a month. It only happens every couple of years and to have one on New Year’s Eve is really rare. Last one was in 1990. So enjoy.

Despite some old 16th Century Catholic pope who had a (very awkward) calendar named after him, I won’t be staying up until midnight tonight to welcome in the new year. We were woken up at 4am this morning by T-Man’s cell phone which he hadn’t turned off. And then I couldn’t get back to sleep. I was cold. I snuggled up to T, who was restless and noisy. (But warm!) Then at 6am he turned on the computer in our room to work from home. By that time I was definitely awake. Unfortunately he couldn’t log in to work so he ended up going in anyway. Phooey. I’m going to drop like a leaf at 7pm. Just watch me.

Hopefully I’ll be able to sleep through the kafuffle at Midnight. It’s usually the freighters in the harbour that wake me. Unless there’s a neighbourhood party and somebody gets inspired to use up the last of the Halloween fireworks – most folks are pretty subdued around here. Our New Year’s Day is just another excuse for my family to get together and eat, drink and be merry! Hope you have a very Happy New Year and I’ll be back in 2010.

Happy New Year Louisa! going to bed, not feeling so hot...but managed to cook all day ( veg stock, soup, baba ganoush, ratatouille AND dinner) hopefully, tomorrow will be better. Hope to run into you next year

I'm feeling much more rested today. I slept from before 9pm all the way to 7:30am this New Year's morning and didn't hear a thing!