I totally believe this! As you may have figured out, I tend to be an upbeat kind of person anyway. But I’m convinced that your attitude is the most important influence on your life. I hear so much whining and complaining from people about how everything isn’t perfect. At least from their point of view. I fall into this trap myself every now and then. But you only have control over just so much so there’s no use getting worked up about those things that are beyond your influence. Let it go without regret. On the other hand, a smile or positive comment goes a long way toward making yourself as well as others happy. I don’t mean singing hymns while the ship sinks. But there’s no point in facing the world as a sourpuss curmudgeon and infecting others with your poor attitude. It’s catching. And I’d rather catch a smile. OK, Pollyanna Damselfly will shut up about it now.

Today, dear readers, we have a Book Review! I was waiting for this one to be released and then I was waiting for it to get to my Canadian online book source. (Chapters/Indigo if you must know. Amazon.ca is ok too but it’s much slower to get here – I’ve tested – and besides, I had a gift card for C/I. Thanks, Milady D!) And it was most definitely worth the wait! 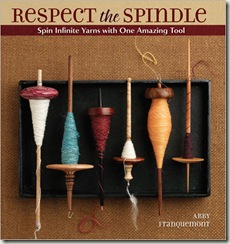 Abby Franquemont has got to be Queen of the Spindles. Because she started spinning at such a young age (5!) in a culture that appreciates and expects girls to spin (Andean) she internalised the whole “making yarn” thing to an incredible degree. And then added her own highly educated North American scientific analysis to it so that she not only knows what she’s doing and why she’s doing it that way but can explain exactly how to do it in understandable terms. Not easy that. Ask me how I know.

“Respect the Spindle” is more than just another learn-to-spin book. I’ve been spinning for over 40 years and I still gleaned a bunch of helpful tips and tricks and a couple of why-didn’t-I-think-of-thats! I certainly need to practice how Abby can “walk” the spun yarn onto her fingers in a figure-8 before winding it onto the spindle. She never lets go of her fibre at the same time either. And her method of creating the half-hitch to secure the yarn on a bottom-whorl spindle is very slick. I found myself constantly nodding as she explains things that every spinner should know – things that I’ve tried to teach in my classes in the past. How to tell when there’s enough or too much twist. Which way to turn the spindle. How to fill it by winding on efficiently. Abby gave me some new ideas to think about on the latter issue: low-whorl spindles can hold more yarn than high-whorl and how to make a “stop” to prevent the high-whorl yarn from slipping when it doesn’t have a notch. (Wish I knew that trick before I made an ugly notch in my pretty dragon spindle. Darn.)

Abby covers less common types of spindles as well including tahkli, turkish, akha, navajo and russian (lack of capitalisation copied from the text) and how they are used. There’s a full chapter on plying, which is not all that easy on a spindle. I envy her slick lizzy-kate for spindles from Greensleeves (though they don’t seem to have any available at the moment). I tend to use the multistrand ball technique myself where you wind a ball using two or more ends together and then just add the twist with the spindle. The Andean ply method is going to take some serious practice! She makes it look so easy. Abby even shows how to chain ply with the spindle. As I suspected, there’s a lot of starting and stopping unlike the smoother motions when you do it on the wheel.

I particularly appreciate the chapter on repair and storage. Spindles are small; they drop; they get bent or broken. Good to know that often it isn’t fatal. And there are some preventative habits to form. Be careful where you leave your spindle.

There are only a couple of patterns in the book for handspun yarn:  a hat (crocheted), a shawl, a double-layer cowl and a washcloth (all knit). All very practical items and the shawl in particular is tempting me with its lacy mitred squares and yummy colours. But it doesn’t need these patterns to my mind except to show that, yes, you can make something from your new yarn. Of course there’s a resources list in the back identifying whose tools and fibres are shown in the photos. Interweave would be getting a lot of inquiries otherwise! The expected bibliography and index are also there.

Now what could make this book even better? Seeing Abby actually spin! So I sprung for the companion download (because it was $5 cheaper than the DVD and no postage or duty). The drawback is the quality is a bit fuzzy especially on poor Abby’s face. I didn’t lose much of the detail but then I already know how to spin so my brain could fill in the gaps for me. If you really are a rank beginner, the DVD might be the better option. Check out the preview clip and see what you think of the downloaded version. There’s also a second video from Abby on drafting, both in downloadable and DVD versions. This one uses the spinning wheel.

The spindle video is an excellent addendum to the book. The important bits are covered in more detail and you can see Abby performing the actions as she narrates what she’s doing. She breaks things up into individual motions and then shows it all full-speed-ahead. The Andean plying method is breathtaking! When I grow up I want to be able to do that too. Maybe one day publishers will realise that the technology already exists to imbed video clips into digital books. Then it would be one convenient item instead of two separate media. Just saying.

I particularly like that there is no distracting background music except at the very end of the video. As a person who is hard of hearing I prefer not having to sift a voice through a veil of other sounds. Since my little netbook computer doesn’t have very good speakers (though for some reason it no longer sounds quite so “head-in-a-bucket” bad as it used to), I use earphones when watching videos on it. I recently had to buy a new set of earphones because I broke a wire in my old ones. Poor things get used a lot on my Palm T/X as well as my netbook so they suffer much abuse. My new ones are cute J*V*C Gumy*s in a pretty tangerine orange. And fit very well surprisingly – considering most types are not at all suitable for my small ears. I tried T-Man’s spare iPod earphones and they didn’t fit at all. These are inexpensive and are slightly smaller than the Sony ones I broke. Not quite as “gummy” as the name might suggest though they stay put well. The only drawback is my old ones 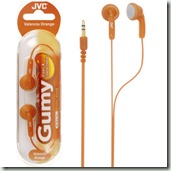 had a volume switch on the cord itself which was very handy for turning up the sound when in traffic or down when in a quiet place without having to fish out my Palm to get at the volume controls. None of the gazillion earphones/earbuds/over-the-ear types I looked at had this feature. Oh well. Did I mention they’re Orange? Cool.

Well. The weather has been very mild (12 C in January!) and very wet. There is panic on the mountains about having enough snow for that O-Lympical Thingy that’s happening here soon. They are busting out the shovels and the snow-making machines and hoping for colder temps. Can’t say I didn’t expect this! (Though it’s very different from last year’s Too Much Snow. It’s actually more normal.) Hope all this remedial activity is accounted for in the budget – the one that we will be paying for. For a very long time. I wish them success but I’m not much interested in the event myself. Too much ado about…

That was a great review Louisa~ thanks! I really want the library to get this book NOW!!! :)

I am a rank spinner beginner at 70. With a yen to hand spindle and the book "Respect the spindle" is the best yet. Thanks for the review and I will definitely check out the DVD. My friend told me to read your blog so now your on my list of favs. keep well

Hope the public library thinks craft books are as important as the latest hot novel - with all the cuts the city has had to make lately. Maybe start saving your pennies?

And welcome, Silky! Hope you enjoy my ramblings. Remember you're never too old to learn new tricks. ;)

Thank you so much for that book review. I recently found her spindle spinning videos on You Tube, but didn't know her name. One of these days I may just have to take up ..mumble, mumble, mumble..... spinning. Like I need another obsession! ;)

Incidentally, I've FINALLY added you to my rss feed. It's about time!!

Of COURSE you need another obsession, Ev! One can never have too many.

And I've FINALLY found your podcast on iTunes! So there.