It’s been a dark and stormy morning here at Damselfly’s Pond. The wind beat the rain into my windows on the west side of the house which is quite disconcerting. You just know the weather is coming from an unusual direction. Seems to be clearing up some now. Just makes me glad I don’t have to commute anywhere on days like this.

Speaking of drab, when I’ve had to go to the mall (recent dentist & audiologist appointments made me!) I always take a glance at the clothes shops. Just out of curiosity, you know? Not that I ever think I’ll find anything that a) is in my style (assuming I had one), b) fits, or c) doesn’t cost an arm and 3 legs. But it’s a fun exercise. This last couple of times perusing I noticed that most of the shops looked dull and drab. Even the window displays mostly lacked colour except for the occasional shot of seasonal red. Are the manufacturers echoing the state of the economy, the mood of the public or something else I don’t seem to be aware of? Black, charcoal, taupe and grey are colours that I actually like but not everywhere and on everything! It’s depressing.

There is a reason though why a lot of my own wardrobe is black. When a certain style is offered in pink, aqua, baby blue and black, I will pick the black every time. Now if they offered it instead in mustard, deep rust, olive, orange, lime or purpley-brown I would have a hard time choosing and would probably buy one of each. Colour is so subjective. The colours that make my heart sing are not necessarily yours. And the Powers That Be are dictating which ones you can have this and every other season. No wonder the Little Black Dress is so popular. It’s a no-brainer. Looks sophisticated and elegant. Also safe and boring. And available.

I had a similar problem buying some tiny sleepers for little Rosebud. I was trying to be somewhat unisex, just in case her parents either decide to have #2 someday or give them away to someone else. She’s only going to be wearing them for a few months at most. No point in going overboard on the pink and girly which none of us appreciate much anyhow. But just try to find something in other colours besides the ubiquitous pink that doesn’t look masculine! What’s wrong with dressing a girl in blue? Her mommy likes blue! And why are there not strong colours like purple and red and orange to go with the pastel greens and yellows? Babies like intense colours. I like intense colours. Pink is just as boring as black all by itself. Put it with orange or green or something. Oy.

Now you know why I learned how to dye things. However, it would help if they made things in pure natural fibres and sewn with cotton thread. Polyester doesn’t take the dye and then you’re left with white stitching on your new colourful garment. Bleh. Sometimes it’s worth it though. Just to have something nobody else does.

Notice that even crows and ravens have hints of blue, violet and green in them. Look carefully in good light. Not boring or drab. Yes, I’m fond of corvids. Even when they pull up clods of grass to get to the chafer beetle larvae or wake me up in the morning cawing at their babies. They’re just being smart birds. 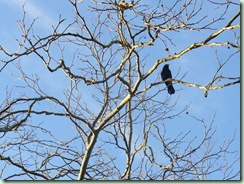 Rant over. I did manage to photograph my Festivus goodies but you’re going to have to  wait until I process them out of my camera. I spent all my available time typing this instead. Oops.

We did have a wonderful impromptu get-together yesterday afternoon with our immediate family. The other half still hadn’t had a chance to meet the newest member. While eating our yummy take-out sushi dinner I fondly reminisced about how 40 years ago there were just T and me. Then we have a daughter and a son. Son marries and has a daughter and a son. Daughter marries and has a daughter. And now we are 9. None of us are taking this happy family for granted but ever so thankfully. Who needs Christmas? I’ve already received my biggest gift.

Hey look! I discovered The Anti-Drab!

Nice thing about black clothes is that handwoven accessories look great with it!

Nice to hear from you, Evelyn!

True. But I think it's just safe. People are afraid of colour for whatever reason and always think they're making some kind of horrible fashion mistake if they just put colours together that they themselves like. I say, "screw 'em". Wear what makes you happy. Paint your house wild and affront the neighbours. Or go all goth-y and black. Nobody's business but your own.

Oops. I feel Rant Mode coming back! Slap me with a wet yarn skein.