Today I’m still feeling a bit under the weather. And the weather itself is pretty lousy: 4” of snow followed by drizzling rain. Bleh. T-Man is working from home to avoid driving on the yucky streets. At least he hasn’t caught the dreaded bug. Yet.

So with nothing else to do, I started thinking (uh-oh!) about what I like and what I don’t like as it relates to knitting and knitted designs and garments. Here’s a rather random sample.

I tend to knit some things following the pattern (lace shawls, hats for example) and others I will modify (particularly more close-fitting sweaters). Of course some things need to fit and with others it doesn’t really matter if they are slightly larger or smaller. I knit a bit loosely so I often need to go down a needle size or two to get gauge. I knit Continental though I learned the English way. When I work two-colour knitting, I put the main colour in my right and the contrast in my left hand. These days however it’s getting harder to remember how to knit with my right hand! I’m really out of practice. Unlike most knitters, my purl rows are a tiny smidgen tighter than my knit rows. And I actually like purling! Maybe it’s my technique which I find very easy. I use my left forefinger to push the yarn down to where I can grab it with my right needle. Needs a video, doesn’t it?

Anyhow, this photo is from before I frogged the Holden Shawlette yesterday: 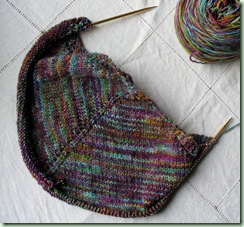 Isn’t the yarn pretty? It’s Newton’s Yarn Country Happy Feet, 100% superwash merino. Looks like a handpaint and comes in a huge skein – sadly with several knots included. You can’t see the mistake in the shawl. Neither did I until I tried to count stitches and realised I had one too many on one side! Took me all day yesterday to reknit the thing after taking it back to less than an inch from the cast-on. Now it looks just like that only bigger – and minus the boo-boo. Sheesh. I’d be halfway through the edging by now! Never mind. I still have plenty of time. It would have driven me nuts to leave the error in.

While I’m working on the shawlette I’ve been neglecting the Zip-Front Vest. Currently it looks like this: 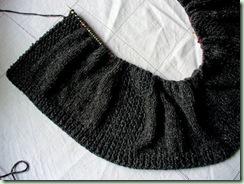 Not terribly exciting really but I’m happy with the way it’s coming out. I’ve almost used one ball of the Berroco Remix yarn. This stuff seems to go a long way on one 100g ball! I hate yarns that only have about 70 yds per ball and you need about 15 of them to make a sweater. Dumb. Yeah, I know all the arguments about how it saves having too many leftovers etc. But it doesn’t really. They just charge you more for each ball because they have to wind it and put a label on it. And I still would buy more than the pattern called for anyhow because I’m always afraid of running out. I’d much rather have lots left over than not be able to get more if I need it. I’m used to handspun yarn where I can squeeze 2 or 3 ounces of yarn onto a bobbin. You only need maybe 5 or 6 of them for a large long-sleeved sweater. Less ends to work in too. Just one of my little Pet Peeves.

I think if knitters demanded a larger put-up with more yardage, the manufacturers would comply. After all, they’ve mostly gone to 100g balls of sock yarn now where you can get an average-sized pair out of one ball instead of having to find 2 of the same 50g ones. Unless your recipient has humungous feet and needs more than 400m. In which case I would suggest getting 3 balls and making 2 pairs. Or 2 balls and making 1 large and 1 smaller pair. Or something else like a hat, gloves or fingerless mitts out of the leftovers. Of all the yarn types, I think sock yarn is the most versatile in the kinds of items you can make out of it. Likely why I have more sock yarn in my stash than anything else! Except maybe lace weight yarn. And we won’t even talk about the weaving yarns, ok?

Recently I’ve been more interested in knitting garments and for some reason the ones I like are all in bulky yarns. I don’t have a bulky yarn stash! I’d have to spin some. Which is probably not a bad idea if I can remember how. I’ve been spinning fine yarns now for so long it’s hard to go back to thicker ones. I can do it if I concentrate! Besides I have lots of wool in pretty colours all ready for blending. Need to use some up for sure.

Wow, I'm with you on all of your knitting preferences except sleeve length. I knit Continental too, also having learned English style first. In purling I use my middle finger of the left hand to tension the yarn down so I can "pick" it.
You've got me wanting to cast on for something new, I've just got my basic sock that I knit on the ferry on the go right now. And I've got a big stash of bulky handspun waiting.
Thanks for the inspiration.

Well, I'm not hard and fast on the sleeve length really. I just hate the fact that standard long sleeves are at least 2 inches too long for me and my short arms! Always needs adjusting.