Now that I’m feeling if not normal at least somewhat recuperated from the Double Whammy or whatever that thing was that hit me two months ago, I’ve been back to my irregularly unscheduled program. That includes taking care of a ridiculous number of plants, most of which need to get into the garden sometime soon if only it would warm up. It also includes my revitalised interest in sewing. Though that did suffer some last week when I exercised my best avoidance techniques and cleaned out the sewing supply drawers instead of actually sewing. At least now I have a newly reorganised work area. I found things I’d forgotten that I had and got rid of some of the junk. It feels really good to at least get one small section completed.

I also made this: 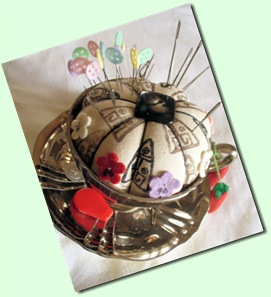 That’s a pincushion in a silver-glazed teacup and saucer. I used a piece of fabric that I had stamped ages ago, stuffed it tightly with wool, wrapped it with cord, stitched on a button and glued it into the cup with Aleene’s Tacky Glue (which is water soluble if I ever decide to recoup the cup). Then I tied two emery strawberries onto the handle and pinned felt flowers with machine needle sizes onto several of the divisions. Now I can keep them separated so I don’t have to go find a magnifier every time I need to read the teensy size on the needle. The saucer holds needle threaders and other small items. I’m so happy that can enjoy the pretty cup and saucer instead of having it hiding forever unused in the buffet.

Now that the Tidy Bug is out of my system, I’m back to working on the charcoal grey dress from Butterick 5244, the same pattern I used for the green tunic back in April. This time I used the welt pockets in the pattern and they were a complete bear to sew in this thick rayon/lycra fabric. I also made kind of a mess of serging the pocket pieces together. The fabric doesn’t fray at all so the rest of the seams will be left as is like I did with the Banana Skirt which was made out of the remnants after cutting out this dress. I’m about halfway finished now. Wish me luck on the collar. I’m worried about working with so many layers that won’t press flat.

If I get bored of sewing, I can always alternate adjusting patterns and cutting out the pieces for some new garments. I have at least a couple of dozen possible items I could make from the stash without buying anything new! The process seems to be going slower than I had planned but it’s not a race, right? However I really don’t want anything to end up in my Sargasso Sea drawer. That’s the one I never really cleaned out in my frenzy. I took out an old project, all cut out and ready to sew, and realised it had been sitting there since sometime in the 1990’s. It’s a hugely oversized shirt with lots of pleats and it’s just not going to work in its current form. I should toss it but I like the fabric, an oatmeal-coloured cotton blend and I keep thinking that I can salvage the thing by cutting it down to fit better. I haven’t though. And there are at least a half-dozen other items in that drawer that are just not working out for one reason or another. I should toss them but I keep hoping for a creative solution to magically happen to rescue them. So I shut the drawer on them.

I did manage to fix two old skirts into something wearable. I patched the hole in the one that I tore last summer when I was riding my bike to the Evil Dermatologist appointment. I covered the mend with a funky black heart leaving the edges raw and roughly stitched on with hand basting. That skirt doesn’t owe me anything. It came from the Sally Ann for $2.50 a decade ago. The other one is even older, a simple faded black cotton tube where the elastic waist had gone all brittle like it sometimes does after 20 years or so. I chopped the top section off and replaced it with a wide folded piece of cotton ribbing that I serged on, kind of like a maternity skirt. It’s a bit loose (the ribbing stretched out some) but it seems to stay up ok and is very comfortable. At least it doesn’t ride up in front like it used to when the elastic was too tight. Both these skirts end somewhere below the knee.

I’ve also been slowly plugging away at knitting on the Abotanicity Tunic. I have one more lace repeat on the skirt and then the sleeves to finish. I just know it’s going to be too warm to wear it by the time I’ve finished the darn thing. I’ve already used up the equivalent of enough yarn for 4 large pairs of socks on this project. One more ball to go.

Your teacup pin cushion is brilliant!!! And I'm so impressed with how productive you have been with the sewing - I started making a simple dress for a friend yesterday and couldn't believe how long it was taking me - I'm out of practice!