How Can A Spiral Year Have A Corner?

No matter. It’s turned anyway. Spring seems like it’s on its way and I’m much more of a healthy human these days. We even walked a Long Walk down and along the water to Granville Island and then back up all the hills carrying veggies and other rather weighty groceries the other day. It felt good to be out in the nearly-spring air even though I was pretty tired by the time we got almost home. Somewhere around 8 kilometres is near my limit after so long lazing about this winter. It will get easier as we hoof it out more often now that we’re both feeling better. As long as it’s not actively raining we can get outside. I missed our almost-daily walks.

Thanks again to everyone who commented positively on my Bra Wars success! (Sorry you didn’t jump into the fray as well, pao. Don’t blame you at all for your reticence though.) I’ve converted the pattern into what I hope will be my next version but I won’t know if it worked until I try it. It’s always tempting to tweak the darn thing every time I sew it but sometimes even very subtle changes render the thing unwearable. Or perfect. You can never predict which. I find it all fascinating – if somewhat frustrating at the same time.

Meanwhile, for my “palate cleanser” I’ve cut out my next sewing project – Butterick 5246 – from the dyed cotton/lycra interlock. Just to remind you it looks like this: 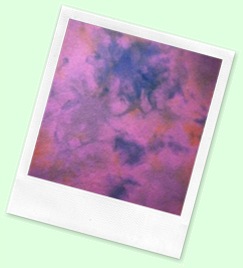 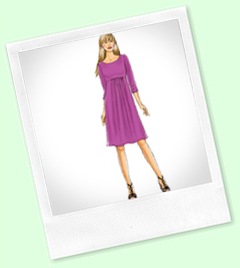 I was a little disappointed that the back (which was cut out with a centre seam to save fabric) doesn’t match on the two halves very well. It’s the curse of using my own hand-dye job which turned out a little funky due to the one emerald dye being old and not taking. It washed out leaving a rather murky area which ended up on one half of the back. I should have been a bit more careful when laying out the pattern pieces – although I only had about 6” left out of the 1-3/4 yards of 54” fabric when I was done and I’m not really sure I could have avoided the issue even if I had noticed it beforehand. Oh well. I decided that I’m not going to be concerned and just go with it. The front looks ok. It’s all cut out now and ready to sew up. When I actually get time to sew.

I finished another knitting project which I haven’t told you about yet:

Mods:  Tried again with this yarn after frogging the Black Bamboo Cowl. (I didn’t like the way it fell around my neck.) In hopes of getting a whole scarf I reduced the pattern by 4 repeats (CO 315) and used beads (4/0 black metallic AB seed beads) instead of nupps which use a lot of yarn.

Like the first Annis I knit, I’m using the Estonian knit-on cast-on with doubled yarn followed by knitting 2 rows before beginning chart. It makes a really pretty and non-rolling beginning. Then I shortened the short-row section by knitting 4 extra stitches before each turn instead of 3 which makes a shallower crescent. I finished with knitting instead of purling the last purl row, k last row and bind off with the Estonian ktog bind-off on the wrong side. Actually I think I purled them tog. Oops.

Comments:  I’m glad I did all of the mods that reduced the amount of yarn I used because I ended up with about 2 yards left! Yikes! There are also a couple of spots where the yarn was damaged (I used some Fray-Check on them) so this is not exactly a perfect make. But it’s pretty and functional and more wearable for me than the original cowl. 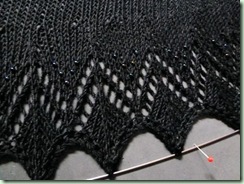 I’m also nearly finished the Winter’s Dark Socks for me and am swatching for my next sweater. That will have to wait for another post.

Today is my dear mother-in-law’s 85th birthday. We’re celebrating with the whole family as we all converge on Reifel Bird Sanctuary where lots of slogging on semi-frozen mucky trails and much feeding of ducks will ensue. Then we will repair to T-Man’s brother’s house for food and, I’m sure, delicious cake. More anon.

Your scarf is absolutely gorgeous! I love the subtle drama of the lace pattern in the black yarn. You sexy beast, you!
Can't wait to see your dress, too.

Beautiful scarf. Your dress will be fun to work on.