Counting: 3 Provinces With 6 To Go

I’m currently writing this from Cypress Hills Interprovincial Park, Alberta side, Tuesday Day 6. We are far past my Furthest East In Canada point. This place is quite lovely though apparently it was quite crazy last holiday weekend – after it stopped raining. Here they call it Heritage Day. Nicer than our BC Day. We could all use a little heritage now and then, don’t you think? Whatever, this place is nearly as far east as you can get and still be in Alberta.

There’s a little tiny town in the park called Elkwater, much smaller and less touristy than Waterton. The large lake is the big draw though today it had whitecaps and actual waves because the wind was blowing so hard. I’m really not used to constant daily wind and it threatens to leave me with a headache. I sensibly left off my hearing aids which just crackle annoyingly. Luckily it chills out a lot after dinner. We walked the very civilised paved and boardwalk trail along the lakefront for a 6k roundtrip. 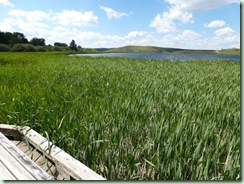 Even though it was nearly flat I was tired by the time we got back to camp. However we really have to alternate activity with just sitting in the van driving for hours on end, right? Otherwise we might seize up entirely.

The hills are covered in lodgepole pine, cottonwood and trembling aspen. There’s cattails and sedge grass in the lake. It’s quite a diversity of plant and animal life compared to the prairie farmland all around. The animals to watch out for are cougars, unlike the bears in Waterton (we saw a black bear on the way out this morning). They are lovely big kitties but hopefully not plentiful!

There are many dragonflies here by the lake, little stocky red ones and bigger slimmer blue ones. I was disconcerted when one decided to land on my cheek! I’ve never had a dragonfly kiss before. A little later another landed on my t-shirt and one on T’s vest pocket. They were very interested in us for some reason but they wouldn’t hold still for a portrait. Thankfully they hadn’t taken lessons from the Invisible Horsefly so no harm done.

We also found an area by the lake where they have fine lightweight bird netting to catch and band birds for study. Ratti of course had to check this out and I had to rescue her from trouble. 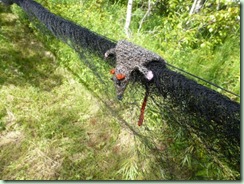 Luckily the nets were furled and the naturalists not in evidence or Ratti would be sporting a band herself. I think she really wanted a new bracelet though! Bad rat.

Next it’s on to the Saskatchewan side of the park and Fort Walsh. No chance of posting this so I’ll be adding on to this one until I can find wifi access.

So here I am again from the Saskatchewan side, Wednesday Day 7. Obviously no wifi yet. Today we woke up to rain and a lovely rainbow over the lake. Unfortunately rain meant we had to go All The Way Around to Fort Walsh. No shortcuts. The non-paved roads were a mess of gumbo. I can tell because we’re wearing some of it on our poor van. Before we left the AB side we tried to view the scenery at the Horseshoe Canyon lookout but it was pretty misty so we kept on around a loop back to the main road. We passed a lot of cows on the way. The Flat Rats were fascinated. 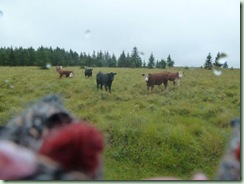 As were the cows. Anyway when we finally got around to Fort Walsh we got to use our Discovery Pass which we bought at Waterton to get in. The pass’s original purchase price is quickly going down and we have at least a half dozen other Canadian federal sites where we can use it on our way east. Fort Walsh was an important outpost of the North West Mounted Police, the forerunners of the RCMP. It’s a big piece of Canada’s history and it was fascinating. 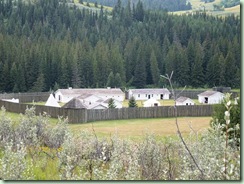 We both had a moment of panic when we got into the reception centre at Fort Walsh and I couldn’t find the Flat Rats. Yikes! I knew I had put them in my bag when we left the van. A quick hike back to the parking lot and there the little brat rats were: one in the parking lot and one back on the pathway where I had already passed. WHEW! I thought they were going to be just a passing fancy and I roundly scolded them that they could be replaced at the first yarn shop we could find! It didn’t stop them from getting into more trouble. 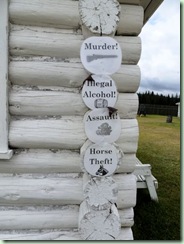 Here they are bucking to get locked up in the cells for illegal alcohol and assault. (You might have to embiggen to see them.) 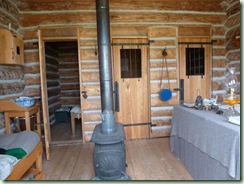 The jail conditions convinced them that crime doesn’t pay. Then they wanted to help fire the cannon. 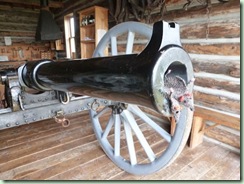 I think they were sniffing up the wrong end? And then they decided to help with mountie/native negotiations. 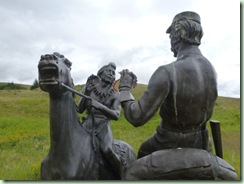 I think “How!” translates as “I’ll show you my Flat Rat if you’ll show me yours!” But I’m not really sure…

Anyhow, there were other fun things going on like drilling the new recruits. 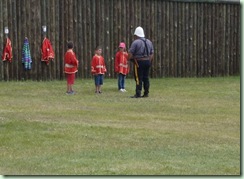 We declined to participate. But we did get cookies and sun tea from the cook tent. The barn was particularly resonant with the smell of the many horses that had been trained and housed here. 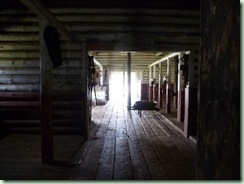 We really enjoyed this little trip back in time. Unfortunately the trip to tonight’s campground was not quite so little. Since we couldn’t get to the primitive campsites near Fort Walsh on the eastern side of Cypress Hills (they call it West Block) due to too much gumbo we had to go All The Way Around north, east and south again to what they call Centre Block. This place is both much too civilised and much too primitive. Want to go on a zip line? Rent a peddle boat? Buy a soft ice-cream? Me, I just want a reasonable campsite and we had to go back and change it from the impossible spot they gave us. We are still camping in an aspen grove in a damp and very wobbly spot. No amenities other than a smelly toilet. Showers are who-knows-where? We are not amused. Leaving tomorrow for SK points east.

Hey! Back again! Last addition from Saskatchewan. We’re now at Thursday night, Day 8, and we are driving on some not-quite-so-flat prairie. 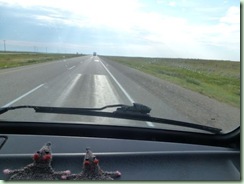 Well OK it looks flat like the rats, but it really isn’t! It waves.

We made it to Buffalo Pound Provincial Park north of Moose Jaw. Yes there are buffalo, er…bison here. Even though they’re behind a fence they are still kind of scary especially when they growled at me, “Step away from the fence”. Or at least that’s what I translated it to mean. 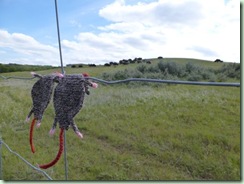 Perhaps the rats gave them concerns? Here they are closer up. 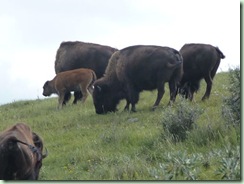 See the little calf? Too cute. There were several little ones in the herd.  Not to mention the very big ones. We hiked along the grassy trail and saw white pelicans. 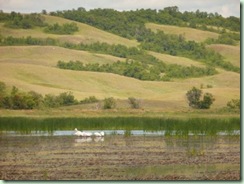 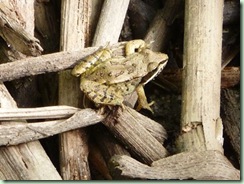 Not to mention too many mosquitoes. By the time we got back to camp and a well-deserved hot shower the poor van was covered in a thick coating of gumbo. 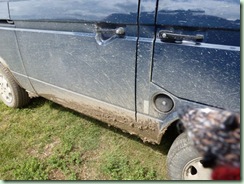 Now we look like many other vehicles around here – totally covered in mud.

Today we’ll be in Manitoba. Province #4 where we lose another hour. Right now we're here at a Timmy's in Regina eating Timbits. The sun is shining and the van is covered in mud after yesterday's backroads adventure to see the bison. My laptop is being annoying and having trouble charging so I’d better post this while I still have power. Wish me luck.

lots of luck, Louisa. thanks for the marvelous trip, seems like the rats are having the most fun!

What an adventure. I used to live in Regina and I sure don't miss the constant wind in my ears, or the gumbo. But there was a certain beauty to the skies. Have fun! (And, BTW, I think you should consider going to Newfoundland too. A shame to go all that way and not see the farthest eastern edge. And St. John's is such a treat!)

Louisa, I am loving your travelogue, along with seeing what those bratty flat rats are up to next. Beautiful scenery.