Well, so as not to be outdone by the rest of Canada (and most of North America) we are having a lovely snowy Sunday today! 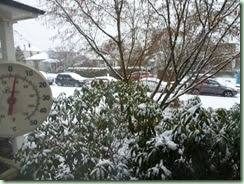 A perfect day to stay inside and sew. What? You can see that thermometer and it’s not even very cold out there? Only down to 3C. Not even freezing! So tell me, why has it been snowing for 2 whole days? Admittedly it took most of yesterday to even start building up because it was melting almost as fast as it fell! It’s totally yukky and slushy and I don’t have to be anywhere so I’m not going out to slog in it. I hate wet feet. Looks kind of pretty though. From in here.

Moving right along. You will be pleased that I’m finally going to publish the proper FO report for my last 2 makes: 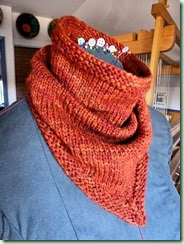 Comments: I know, it looks kind of silly modelled by Debbie Double! (She brings new meaning to “pinhead” doesn’t she?) Love this pattern and the results. I’ve already worn it several times and it kept me very warm and stayed in place very well. The colour is certainly warm enough!

My handspun yarn was more like worsted weight than bulky but it worked ok - a bit loose but not too bad and it won’t matter in a cowl. I learned Ysolda’s wrapless short-rows for this project. Love this technique and it will be the go-to one from now on. It’s just like the Japanese short-rows but uses a piece of yarn instead of a safety pin. Less fiddly.

I might just be making more of these cowls in future. There were envious looks from certain family members. 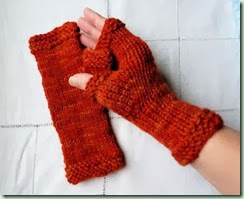 Comments: In an attempt to use up the last of the handspun yarn, I decided to make fingerless mitts on the fly. It took 2 attempts to get the numbers right but I think they worked out very well! There were only a couple of metres of yarn left at the end.

In other knitting news, I still haven’t finished the Blue January Socks. I’m planning to try dyeing some matching yarn today to complete them with. However close it turns out I’m going to use it anyhow. These need to be done. Particularly because I already started another pair of socks. I needed a portable project to be able to sit through Thursday’s guild meeting so I decided to try my Sweet Georgia Tough Love Sock yarn in the colourway “Phoenix Rising”. In a fit of madness I also used the Retro Rib sock pattern by Evelyn Clark that had taken me so long to knit last time I used it. I do like those socks though and they seem to work ok with a variegated yarn. I’ve finally got the pattern stitch in my hands now anyway so it’s good that I’m using it again before I lose it. This is my first experience with the Tough Love though. I want to see how well it wears over time. Feels nice so far. Since I only live a couple of kilometres from where dear Felicia and her elves dye this stuff, it’s an easy yarn for me to obtain. (Hey, I wonder if I could get her to sell me some of her base yarn? Must ask.)

On my Simple Tweedy Pullover I’m currently up to where I divided front and back and added on stitches for the sleeves. This is fine yarn 2/8 Shetland wool and knitted on 2.75mm needles so it’s quite a long slog in stockinette. Great movie and Olympic skating watching stuff actually. I do enjoy just knitting around and around though. No-brainer.

In sewing news, I’ve started actually sewing some of the garments I recently cut out. I found a flaw in the fabric near the shoulder on one sleeve! Whaaa! There are only the tiniest scraps left so no chance of cutting out another sleeve piece. On closer inspection It was a lump where the knit got caught up. It didn’t show much on the right side but had a tiny hole right through. I clipped off some of the lump on the back which of course made the hole bigger. Argh. So in desperation I unravelled a little strand out of a scrap and used that as thread to stitch up the hole. Well, it matched better than thread would have! And then I gently used Fray-Chek on the back side to make sure it held together in the wash. Hopefully that will do it and you can’t readily see the repair unless you’re looking for it. I’d photograph it for you but it’s dark charcoal gray and doesn’t show up at all well.

I’m taking my time with the sewing because, hey, there’s no real hurry here! It has to be fun and not a chore. Or a marathon. Although I’m looking forward to having a few new tops to add to the old wardrobe. This is more like “bread” sewing – not even “cake” and far less exciting than “icing”! But that’s the kind of thing I wear most so that’s what I’m making. Besides, I can’t buy even basic plain t-shirts that fit these days. They’re all either too big or too small in all the wrong places. Interestingly, it’s not my body’s current shape that’s the problem either. I have older purchased t-shirts that still fit fine. (Though they could be longer so I usually wear them under another layer.) It’s obviously the current fashion that’s the true problem. Oh well. It’s much more satisfying to make my own anyhow because then I get exactly what I want, right?

Good job on the scarf and mitts! The colour is gorgeous.