So why am I still lazing around indoors? Dunno. Glad I asked me that. I’ll get back to me on it. Later.

Anyhoo, I finally started sewing on my Marcy Tilton skirt, Vogue 8499. Right before the larger grandbeasties and their parents showed up yesterday afternoon so I didn’t get very far on it yet. To refresh, that would be this skirt: 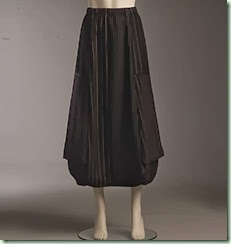 (The pants also in this pattern will come later.) The fabric I’m using is a lightweight wool suiting in a very subtle dark (mostly black and dark gray) plaid. It washed and dried in the machine like a dream but it creases like crazy. I hope I’m not sewing a giant wrinkle-fest instead of a skirt! It’s also quite drapey so I hope the skirt’s funky shape isn’t lost in its’ lack of body. Lotsa hopes, huh? We’ll just wait and see how it goes then, won’t we?

I appreciate Pao’s advice in a comment that I might not need a zipper in the back of the elastic waist. Not sure there’s enough room to get the thing over my hips at the size I chose but I’ll check before I sew in the zip. Thanks for that! I also read on Pattern Review that the required zip length for the pockets is not necessarily as stated on the pattern envelope. It varies with the size so that the 7” would have been too small and instead a 9” would fit perfectly. That’s a 2” difference, Vogue! Not a problem though since I don’t have 2 more zips of either size and so planned to use buttons instead. In which case I needed to add a small facing at the top of the pockets to accommodate the buttonholes and will iron on a bit of interfacing inside to support the buttons. I’m putting 3 small ones on each pocket so the weight shouldn’t be significant. Also I got an inspiration from a reviewer that she added small pockets inside the main ones so little items wouldn’t get lost in the bottom of those huge saddlebags. Genius. I’ve already made them and they’re ready to sew in place.

One problem I had was choosing exactly how long to make this skirt. On the dummy in the photo it comes about where I would like it on me. However, I’m pretty short and the models are not, so I shortened the pattern pieces by about 4” otherwise this thing would have been down to my toes. It’s hard to tell exactly though since the belled hem pulls it in somewhat. Hey, I’m just not a huge fan of the maxi-skirt. Reminds me too much of my highschool circa 1966. All the girls were swanning around in floral print maxi-dresses while I sewed my own miniskirts, shifts and tent dresses. Ever the fashion rebel, me. I did however fall for the long dresses a little later on, in the early ’70’s. The loose styles fit over my pregnant belly very nicely and my toddler daughter and I could be all matchy-matchy. Cute.

These days if I’m going to wear a skirt at all it has to be a reasonable length. Not too short and not too long. Though of course too short can always be solved by wearing leggings underneath, too long just drives me nuts. Somewhere between just above my knee and just above my Blundstone boots is good. Also, maxi-skirts are hard to manoeuvre around in. I’m always afraid I’ll trip over the hem. And naturally I probably would. Good thing hemlines aren’t dictated at an exact height anymore, isn’t it? We are free to choose where we want it all by ourselves. I remember the days when all the older folks were flipping their collective wigs over the <gasp!> mini-skirt. It ended above the knee! Way above the knee! Oh dear! Society is going all to heck!

Alright-alright, enough of this Memory Lane stuff before I start telling you about the time I wore a pants-suit into a highschool. It wasn’t even my school and anyway I had graduated already the year before. We were just there to visit a former teacher. You’d think I was running around with a gun. Or naked. Pants on a girl. The horror. The principle nearly kicked me out on my ear! Ah, how the times have changed. But I’m not telling you that one. I’m going to do the laundry instead.

I have that pattern too - hoping to make it in a fairly stable Japanese lightweight wool. Maybe I'll see how you do first!
I remember girls weren't allowed to wear jeans to school, although we could wear dress pants. The students held a "protest"- standing around outside the building instead of going in when the bell rang. I don't think we even had any signs. Not too organized, but it was successful - we were allowed to wear jeans.

The skirt is long. I'd say mine looks about the same as the pattern picture on me, in terms of length and shape. The corduroy helps keep that interesting bell shape which I love. But really, it would most likely be cool in any material, what with those great pockets!