Down The Garden Path

It’s been very warm here – 28C (84F) in the shade today – with some high cloud that diffuses the sun. And also keeps in the humidity. OK, it’s only 65% which may be low for some places but it’s quite sticky to me! I’ve been out in the garden clearing the paths. 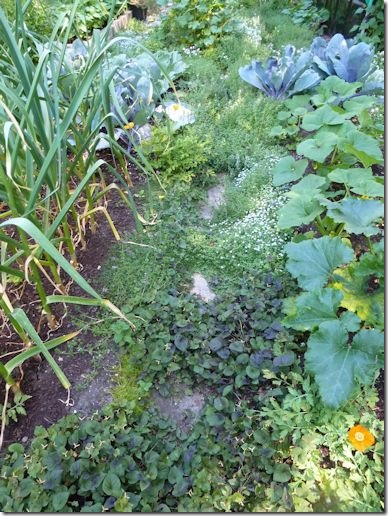 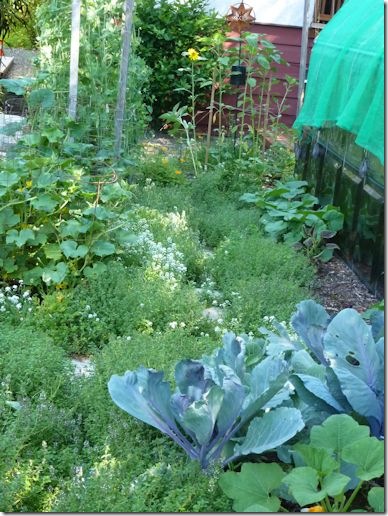 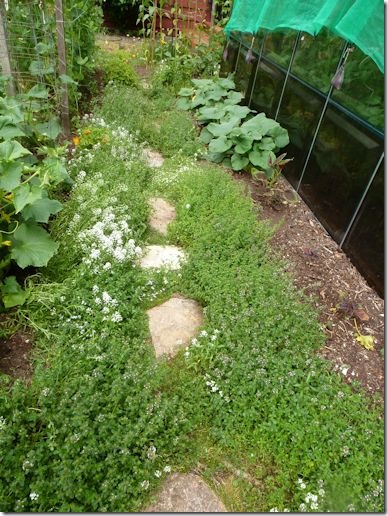 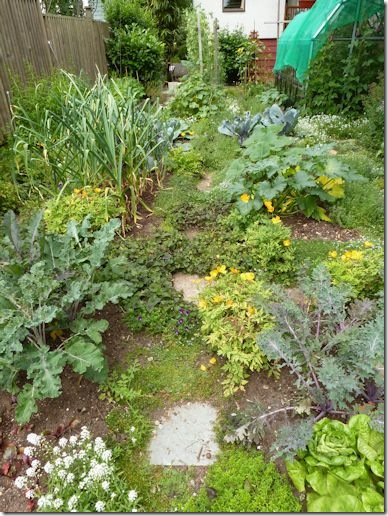 You can actually see where to put your feet! Amazing. The ground cover between the stones includes several kinds of creeping thyme, blue and white star creepers, alyssum and violets. I pulled out a bunch of weeds and pruned the higher-growing thyme back with the kitchen shears. They will need it again in a few weeks but it’s kind of fun giving them a haircut. Now if only the vegetables in the garden beds would grow as well, huh?

In the dye garden the various types of coreopsis are starting to bloom. This one is the perennial grandiflora: 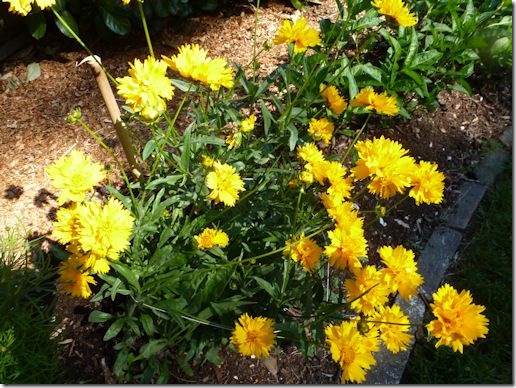 I grew this plant from seed. It took 2 years to bloom! The flowers are quite large (you might have guessed by its name!) and I’ve been deadheading them as they begin to wither. Eventually I might have a single dyebath to show for it. Then there’s the threadleaf coreopsis, also a perennial: 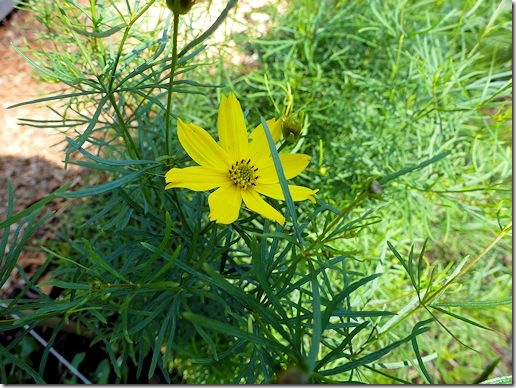 So far there’s only one flower out. I got this plant from my mother-in-law’s garden. For her they are reseeding like weeds! I hope to try using the leaves in eco-dyeing later this year but I’ll also keep the spent flowers to add to the grandiflora dyebath. Lastly there’s the annual dyer’s coreopsis: 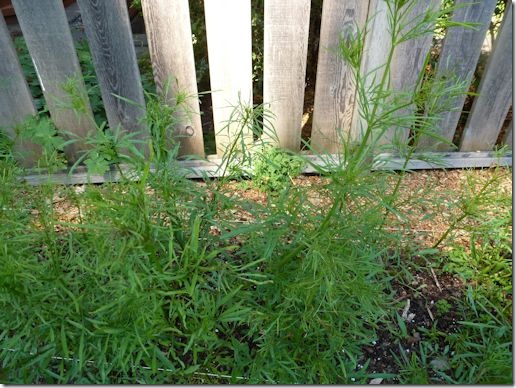 They haven’t started blooming yet but there are buds nearly ready to pop. I grow these every year and love the colours I get from them, yellow, brass, gold, orange and rust. They are very susceptible to dye modifiers for all the different shades. I’m looking forward to seeing how the perennial coreopsis differs and whether or not they will produce orange/rust with an alkali. (I usually use a splash of non-sudsy ammonia.)

What else? Oh yeah. I finished my La Pine Dress (after a town in Oregon, south of Bend, where we camped once and visited “Big Red”, a huge 500+ year-old ponderosa pine: 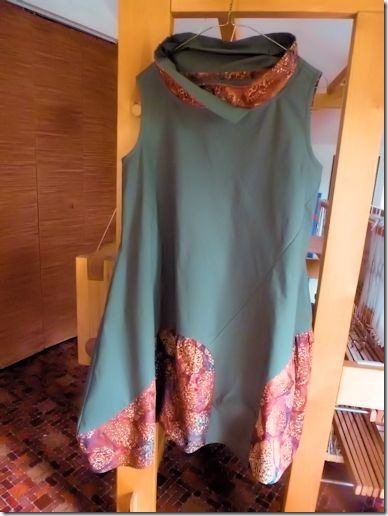 Yes, I know. Bad photo and it’s not even on Debbie Double this time. Lazy blogger. I love this dress! It’s so totally me. The pattern is Vogue 9112 by Marcy Tilton: 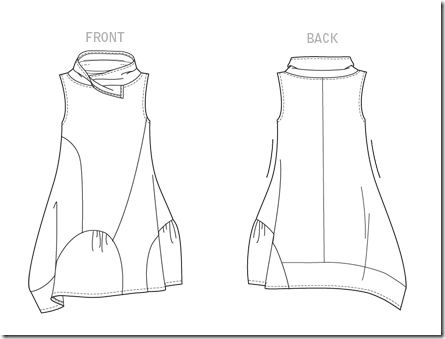 I made a Medium and the only modifications were: slope the shoulders, raise the underarm 1”, and face the collar. I think the two fabrics complement each other quite well: the green (a little darker than the photo) is a mid-weight cotton and the batik is a quilting cotton sporting pine cones on a mostly rust ground. I had 3 metres of the green cotton  in my stash forever but it has several dark streaks running across the width so it had to be made into something with small pieces that would fit between the flaws. The batik came from my last trip through Portland, OR, and it also had a flaw, a seam about 1.5 yards from one end of my 5 yard length. The batik goes right over the seam but I didn’t want it in any of my garments so it just became another thing to work around. Though there are lots of pattern pieces as usual for a Tilton pattern, they went together very easily. The only things to watch for are to make sure all the markings are transferred to the fabric and to make sure you know which is the right side up. I marked more carefully than usual and kept each pattern piece with its fabric until I used it. And for once I pretty much followed the directions verbatim.

It’s a good thing I pay zero attention to Vogue’s pattern sizing though! The Medium (12/14) doesn’t remotely match my measurements (oh, if only I was 34/26.5/36!) but this dress fits me perfectly. As long as the shoulders, armscyes and bust fit, the rest of the dress is more-or-less tent-shaped. It comes to about an inch above my knee at the shortest part of the hem so tall persons might want to take note. There’s no provision for lengthening or shortening on the pattern. I’m sure it could be done but it would be tricky with all the pieces. I’m glad I faced the collar. That gave it much more body and it holds up better than it would have with just the lighter-weight batik, even though the reverse side of the batik is good to show since the print comes through only a little blurred.

Now I want to sew more dresses! But first, I need to finish my Alpaca Tweed Cardi. Nearly there. There’s one pocket and the sleeves to set in and I’m done. So much sewing up of seams on this sweater! More on this project very soon. I also need to start something new that can become my TV knitting. The Periwinkle Cami is still not past the cabled necklace part so it doesn’t yet qualify. Too fiddly and too much chart reading. I just can’t sit and watch TV without something in my hands. Such wasted time! Oh yeah, there’s going to be enough of the alpaca tweed yarn left to knit a shawl too. I’ve already decided which one. So many things to knit I shouldn’t have any trouble starting something new, should I?

Off to sew a sweater…

If your garden is anything like mine, it doesn't call. It YELLS REALLY LOUDLY! "Water me!" And "Water me some more!" "Pick me!" "Weed me!" Yup, really annoying voice too. Luckily for it I'm a sucker for my garden.

Thanks for the nice comment on my blog. Just noticed this dress on yours that I plan to make next. Good job and love your colors!

Thanks, Peg! Can't wait to see how your "Cirque" dress turns out. Just found out that that's what Marcy calls it. I like names better than numbers for patterns.