One Marathon Ends & Another Begins

I’m absolutely done with sewing! At least for a couple of months. I made 11 garments in total: 6 tops, 1 pant, 2 leggings and 2 vests. Some were simple and some were more challenging. Four were Katherine Tilton’s and one was an adaptation of hers. One was Marcy Tilton’s and three were my own TNT patterns. Only two were regular non-designer patterns. They were all pretty satisfying to make though I had issues with the extreme stretchiness of both the bamboo/lycra and the ribbed poly/lycra. I hope I will get lots of wear out of everything but only time will tell.

I played with my tripod and camera for most of these shots. Can’t say I’m any more pleased with them than with Thom’s efforts. Oh well. I need the documentation so I’ll just have to forego any concern about how silly I look!

First up, the Snakeskin Top, Katherine Tilton’s B6101:

I really like this one, asymmetrical wonky pockets and all! 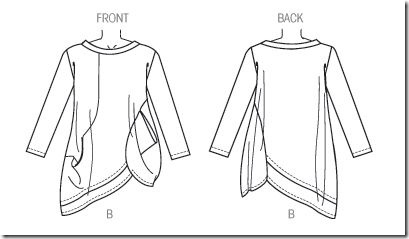 The fabric, a fairly stable and spongy but still drapey poly/lycra novelty knit, works really well. I played with the pattern pieces’ grainlines to prevent the snakeskin pattern from just all being vertical. And the back: 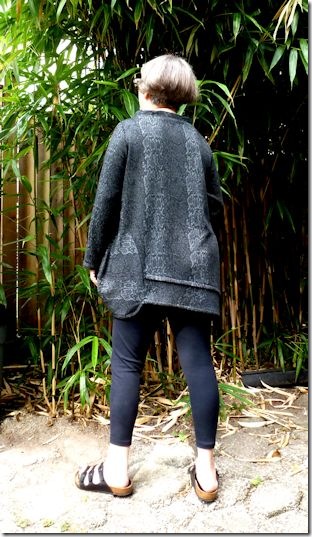 I’m wearing this top with my KwikSew 2797 leggings in the poly/lycra rib. This is supposed to be capri length! More like 3/4 length on me. I also had to make the same changes to this pattern as I did to the Pumpkin tights (V9108) and take in the legs, tapering from the crotch to the knee and then straight down to the cuff. Oh, remember the Leggings Wars? I think this pattern won – but only by a whisker. The difference? The waist is a little more comfortable: a little higher and more contoured plus the back seam is angled more. Since I had to do the same re-fitting with the legs, they don’t count in the final score. Now I have a TNT leggings pattern! Not to mention that I totally wish I had bought 4 more metres of this $2-per-m fabric. It won’t be there by the time I can get back to Dressew. I could use more pairs of these.

After I made the B6101 top I knew exactly what my Japanese brick-coloured sweatshirt fabric was going to become. I didn’t think it was drapey enough for the funky folded pocket part so I just used the other side with the princess seam and mirrored it. Also straightened out the hem and hem bands and brought in the neckline at the sides by 1/2” each side (it felt too wide). It has more of a bubble thing going on than the original version: 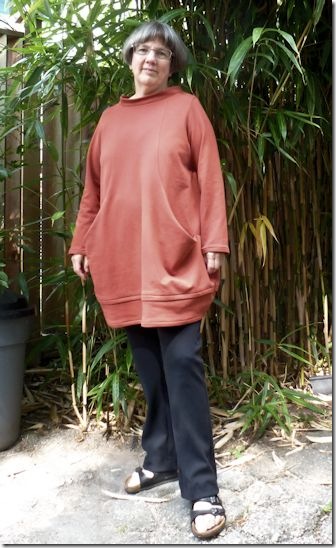 But it’s cosy! I’m calling it the Arches Sweatshirt because both the colour and the pocket shapes remind me of Arches National Park in Utah (where we will be going again for the 3rd time!). Here’s the back: 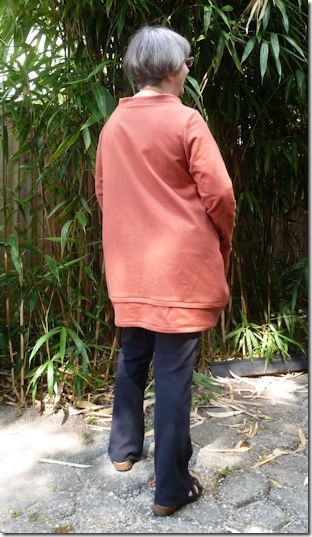 Also notice the pants which are my TNT stretch pants in the poly/lycra rib. A very plain garment but one I will wear the heck out of. That’s the reason I cloned my original pair of ready-to-wear pants because I loved them so much I didn’t want them to disappear.

Which brings me to the last piece I made in the poly/lycra rib, B5954 in the sleeveless View A. It will probably be worn more as a jumper as here: As you can see, this one gave me problems. I had issues with seams rippling especially the long curved hem. This fabric would not press flat and my iron-on stabilizer wouldn’t stick well at all. I actually hand-basted the armholes and neckline which just have a narrow hem and not bands or facings. However they still stretched out just enough so I had to take in the underarm seams about 1/2” to compensate. Oh well. Another learning experience and I’ll probably still wear this thing to death even if it isn’t much of an advertisement for my sewing skillz.

Back view shows the sweeping tail: 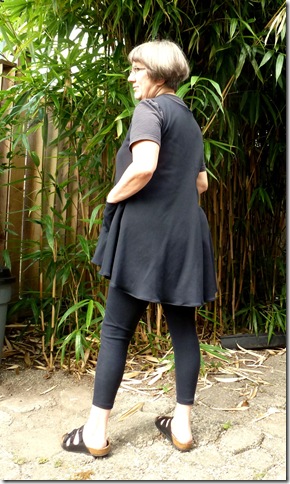 I have one more piece that I didn’t get photographed yet. I’m in full-on packing and cleaning mode now though so you’ll be lucky to get it on Debbie Double!

I did get Thom to photograph me in my knitted Periwinkle Necklace Cami: 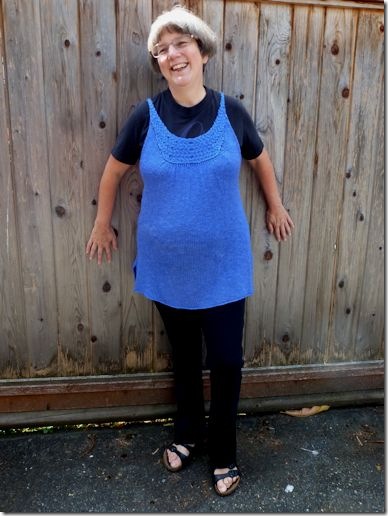 We tried a new venue, the neighbour’s fence in our back alley. Nobody was there, right? Hah! The minute we started, a girl walked down the alley chuckling that she has the same problem posing for Instagram. Then the neighbour and her sister drove up in two separate cars and wanted to tell us all about her garage break-in and blah-blah. Then another car wants to get down the alley and the sisters’ cars are in the way. Suddenly it’s rush hour. Sheesh.

So what can you do? Be silly of course: 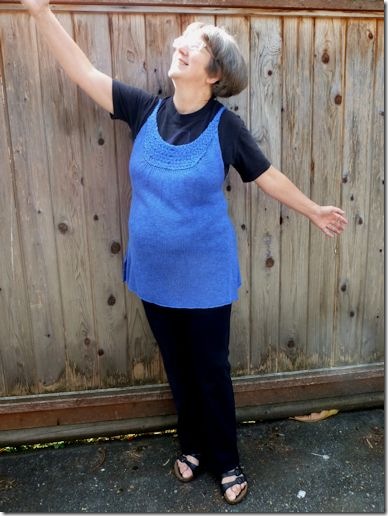 I actually like this top much better than I thought I would after all the fussing with the pattern and ripping and re-knitting. And the intense blue-heading-towards-violet colour, although it’s not one that shows up in my closet, is one of my favourites visually. It’s the colour of all the doors on my house and garage after all. Another Good Thing made with my weaving yarn stash!

OK, the heat is on now. We have less than a week to get ready and we’re both still feeling crap. We’ll have to pace ourselves and what doesn’t get done, just doesn’t. In case you were wondering, they’ve opened Highway 3 so we don’t have to come up with alternative plans. I think it’s going to be smoky for awhile though. Right now there’s a slow speed limit and debris but hopefully that will be cleared soon. Unsurprisingly the fire was started by a cigarette. Grrr…

And speaking of GRRRRR…this beast and all his/her relatives are Public Enemy Number One around here: 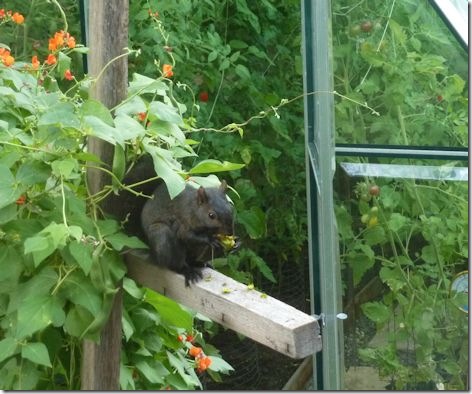 They’ve already run out of my hazelnuts and walnuts (best nut year ever too! Sniff.) so now they’re digging into my beans, my butternut squash (already ruined 3 out of 5), the sunflowers and ripped the nets off the not-quite-ripe grapes and ate them too. If this keeps up I’m going to give up gardening. Seriously. Why feed the scrats instead of us? And some people actually think they’re cute??? Anybody know of any squirrel repellent that one can safely use in the vegetable garden?

Off to begin the crazy - tidying up my studio!

Wow, Louisa, you did it! And even with photography too. Well done. Those Tilton tops look great on you. Soon you'll be able to sit back and relax in them. yeah, right.

About those pesky squirrels – I never thought to try this when I had a house and an infestation of squirrels – I would try one of those cat repellant sprays. If you don't like the price you could make it yourself from mustard oil bought from an Asian food store. I bet that will stop the little darlings. The pest controller (who did nothing!) told me they run on tracks. Watch the little darlings to find out where the tracks are and spray those.
OH YES, THE CLOTHES – WOW. You've been going hammer and tongs with great outcomes. I hope you'll feel well enough to enjoy the fruits of your labours and your holiday.
Vanouver Barbara

Thanks so much, my dears! I had such a great time in the studio working away on these garments. I've learned a bunch. Already been wearing some of the clothes and we haven't even left yet! I'd say that marathon was an unqualified success.

Thanks, Barbara! Great advice. The squirrels are obviously a force of nature. Next year it will be back to the battle for MY FOOD but right now I capitulate. DONE! (Evil fricking rodents!)