My Weaving Yarn Inventory Project is nearly done. So far I've invested five days sorting through the baskets, boxes and shelves. In mid-toss it looked like this: 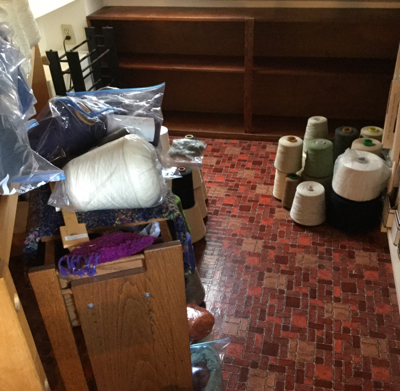 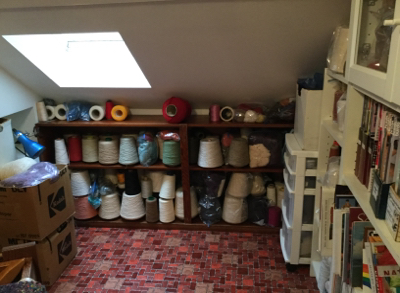 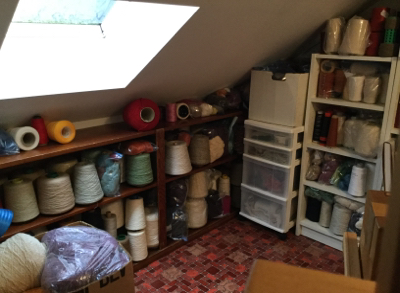 Better, no? And that's not all. There was this: 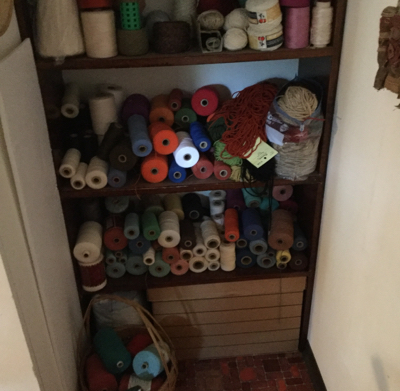 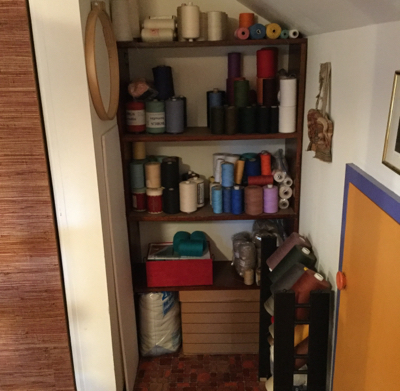 I got rid of a whole big green garbage bag full. And I'm still not sure what to do with the stuff in those brown boxes stacked to the side up there. There's no room in the attic until I manage to sort it out too. Anyone want 3 giant cones of navy blue cotton slub yarn? Each one is a slightly different blue. Why do I have this stuff? Navy so does not go with anything in my house!
On the other hand I did find some yummy treasures that will be very nice to use: fine rayon, linen, hemp/cotton, tencel, bamboo and fine wool. Sadly some of my wool yarns sustained damage, not from m*ths but from carpet beetles. I peeled the worst layers off a cone or two but I was very sad to see that some small cones of pricey superfine merino had gotten munched. Sigh. Every one is now carefully ensconced in sealed plastic bags. This is just not going to be happening again!
I had several cones of mystery yarn so I tried to identify them with burn tests. Anything resembling acrylic got chucked except for that cone of red Aran weight there on the top of the shelves under the skylight. I first want to see if it will make successful tawashi (dish scrubbers) though it's a little thick. I'll be hunting for a different pattern than my usual crocheted spiral. I also have three big bags of wool yarns suitable for weaving a blanket. That will be my project for next fall and winter. Some of it (or maybe all) needs to be overdyed, some needs to be plied, and decisions have to be made about warps vs wefts. It's a big project and it'll be fabulous to use up all those oddments.
You have to realize that I acquired a lot of these yarns (considerably more than half) from other weavers. Either they were unloading their own unwanted stash or their heirs passed it on to the guild. Often I ended up taking the bad with the good and some of these yarns are rather...ahem...elderly. But often something pretty nice can be made from them so I didn't pass them up. I was stocking up. Things will be different in future! I no longer need to keep adding to the inventory unless I truly need it to complete a project. I can't use the "retirement fund" excuse anymore since I am retired. Or, more correctly, we are retired. I want to have the time to actually use as much as possible of it while I still can.
Of course this isn't ALL of my yarns either! There's still the sock yarn stash in the other room and the two cones that I'm currently knitting with but it's a pretty good start. The iPad app that I'm using to inventory the stash(es) is called Sortly and it's very simple and intuitive to use. The free level gives you 200 entries but I upgraded happily (though rather expensively as apps usually go) to the full registered version. It even automatically syncs with my Evernote account. Though you're probably wondering why if I have Evernote that I need Sortly too? I only have the free Evernote level so I can't access my notes off-line. And it's a lot easier to add photos, tags and notes quickly and to edit later. If you need them Sortly will even print you out labels complete with QR codes! There are other advantages too but I won't bother listing them. Suffice it to say it works for me the way I want and that's the important thing, right? I'll be adding more folders and items as I go. I'm not done going through everything yet.

So whilst I've been messing with dusty yarn not much else has gotten accomplished! I still haven't planted any seeds either in the garden or indoors in the Grow Op. This year's garden is going to be pretty subdued anyway if we're going to be away at critical harvesting times. I don't want the house sitters to have to bother with the garden much except for watering a few things. The weather has been shifting madly between glorious sun and deluging rain so I just haven't been inspired. I guess in the scheme of things it doesn't really matter much. What will be, will be. There's always the market where one can actually buy veggies, right?
Meanwhile, here's wishing you a very Happy Easter if you celebrate! Otherwise have a lovely day. We are going to visit with fambly and feast on Bob the Turkey at Milady Daughter's. Off to make the salad as my contribution and Thom's got some of his homemade wine chilling. The Easter Bunny seems to have left a couple of bags of chocolate eggs to share too. Can't wait!

Hi, if you haven't found a home for the navy cotton slug yarn I can imagine some placemats and runners in overshot with them. I'd be happy to pay shipping and wrapping. Hope your dinner is grand.

oh, yikes - the ever expanding stash, hope you now have it under control. Much of mine came the same way and I'm learning to say "NO" loudly but some still sneaks in. btw - I've borrowed son's ipad for the trip and am tearing my hair out! I'm just beating the weeds back in the garden, will miss the best part of planting season.

I am so impressed with how well organised you have made everything! Almost makes me feel that tackling the totes full of fabric and yarn that I have in the basement is possible!

Hey, Anonymous, it would be lovely to know where you are. Though I doubt this stuff is worth the postage and trouble to pack and send it. Lint catchers! Heavy. Canada Post. Ugh.

Wait until you all find out how much more stuff I can inventory! LOL! There's more than one stash...