I promised a bit of a review of the new books I bought with my birthday gift certificate. (My birthday is in November so it was well-marinated by the time I got around to using it!) The first one is the second in a series (and yes, of course I own the first one too): 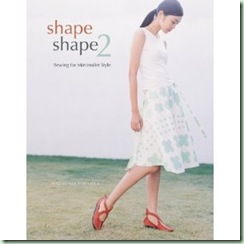 Shape Shape 2: Sewing for Minimalist Style by Natsuno Hiraiwa. This is the English translation of the Japanese book which came out in 2009. In this second book, Natusuno carries on with her collection begun in the first Shape Shape. The designs are quite timeless so nothing looks dated at all. It includes patterns for tops, skirts, scarves, belt and even a brooch. They are either in SML or one-size-fits-all, which of course leaves a lot of gaps in the sizing. At least the designs are simple enough to be fairly easily adjusted if necessary. The patterns are included in an envelope in the back and are the traceable format similar to BurdaStyle but much easier to see. Seam allowances are NOT included. Sewing instructions are in the typical Japanese numbered diagrams with corresponding cryptic instructions. They aren’t really difficult but I’m sure it makes a lot more sense if you have at least some sewing experience. It’s better than BurdaStyle though especially if you are better with illustrations than words.

The styles may be simple but most of them are quite ingenious and able to be worn more than one way. I particularly like at least 3 of the skirt patterns, including one that switches between a skirt and harem pants with a few buttons. Truthfully I don’t know whether or not I really suit the Japanese-style clothes, being somewhat more rounded than the usual small straight-figured woman these were designed by and for, but I love them for their comfortable fit and versatile wearing possibilities.

A lot of the sewing bloggers also like the Drape Drape books by Hisako Sato but they aren’t at all the same as Shape Shape. They are for slinkier knits and are quite challenging, both to make and to wear! Very avant-garde. So cool, but definitely not my style. And neither of these series are for pattern making – they include the patterns for you – so they are different again from the Pattern Magic books. Whew! Clear as mud now?

Because I don’t yet have enough books (!!!) on pattern making, I also received this new title: 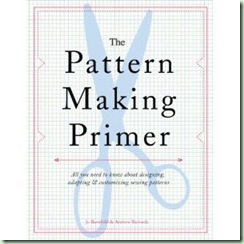 The Pattern Making Primer: All You Need to Know About Designing, Adapting, and Customizing Sewing Patterns by Jo Barnfield and Andrew Richards. I’m somewhat on the fence on this one. It has a succinct style with lots of illustrations but it just seems to attempt to cover way too much in too small of a space. Check out this list from the cover:

Several of those subjects are books-worthy all by themselves! Also the language is more “industrial” than “home-sewer” which might confuse some, though I personally kind of like it. This book actually is more like a text-book-in-search-of-a-class-with-instructor since so much of the information seems like it needs clarification and expanding to be really meaningful.

If you’re a brave DIYer, you could make a mini-sloper and play with some of the intriguing style changes by slashing and moving darts and opening tucks and pleats. There’s some hopefully clear instructions for sewing plackets, pockets, zippers and collars which could be helpful. There’s one whole section on the drape method for rubbing off a jacket. Tidbits and teasers all through! However I did find the chapter on going pro and e-tailing to be simplistic to the point of laughable. Luckily it’s only a few pages wasted.

I want to like this book but I’m going to give it a Definite Maybe. It’s not expensive. It might be just the place to look up something that’s not completely new to you but you just want a reminder on how something should work. On the other hand, if you really want to be a designer-maker I would skip straight to Kathleen Fasanella and Fashion Incubator for the real deal. Her book is the definitive version that blows The Primer out of the water. And no, I don’t own that one. I have no plans to ever make a business out of sewing.

I’ll save the last book for another time. I still haven’t read it all and I want to do a post on recent spinning publications anyway. Hold that thought.

Meanwhile, yesterday we had a leetle accident with poor Blodgie, the hot water bottle. Yeah, you knew it was coming, didn’t you? He was three years old and used a lot, especially this winter when we needed him nearly every night to warm up our cold bed. Luckily he didn’t spring a leak (and it was a very small one) until we were awake enough to feel it on our toes. The sheets got wet along with the mattress pad but the water didn’t penetrate down to our foam mattress. Whew! We managed to locate a replacement – and a replacement for the replacement (aka The Heir and The Spare) just in case. This one is red and slightly larger. It has a best-before date on it of 2017 so here’s hoping it lasts longer than the rather cheap green one. Now I want to knit a new sweater for it. The old orange one is rather pilled and a little too small though I’ll probably keep it for The Spare after a shave and a wash. I’ll probably use the pattern that I developed for Stargazer’s Blue Blodgie which is the same size. Now I need to locate some suitable yarn in the stash. Surprisingly I need about 250 yards of worsted weight but I don’t think it matters if it’s not superwash wool. It might felt a little but that should just make it cosier.

As I mentioned in the last post, we had a nice day yesterday so we went for a Long Walk downtown to Dressew. I wanted some more elastics and I managed to find some bra wires that are ostensibly the right size. They are definitely not as nice as the ones from Bra-maker’s Supply but they’re also only $.99 a pair and good enough for practise bra sewing. The elastic selection is a bit weird (as is all of Dressew really!) and although they have lots of interesting colours in narrow plush-back and fold-over styles there’s not a lot of matching colours nor much of any type of lingerie elastics in either black or white. No wonder all my sewn lingerie has mismatched elastics! Oh well. Nobody really sees it but me and perhaps T-Man who doesn’t care either. I did find a whole bolt of black powernet though and got a yard (only $3.00!) which should last a few projects. And naturally a few bits out of the remnant bins followed me home as well. How do they do that?

Some of the discount fabric stores have bins of lingerie elastic. I still have a huge basket of stretch laces for panties/slips in all kinds of colors - most of which I bought at the Discount on 41rst & Victoria. Fabricland & Fabricana used to carry them too. Unfortunately, the bra backs all came in black or white!!

Thanks for the shopping hints, Sharon! Did you know that the bra hook sets will dye with acid dyes or Rit? So will some of the elastics but not all.

Thanks for the review on Shape Shape 2. I haven't gotten either of them yet, but heard great things about the first one. My true love gave me a Couture book for Christmas thinking I might like it. I've read it, but it's way beyond anything I want to do. I guess it's a good reference book...